Sixteen years after Pew Research Center’s first study of digital communication in a presidential campaign, social media is central to candidates’ outreach to the public, changing the role and nature of the campaign website. While the candidate website still serves as a hub for information and organization, it has become leaner and less interactive compared with four years ago. Campaigns are active on social media though even here the message remains a very controlled one, leaving fewer ways overall for most voters to engage and take part. 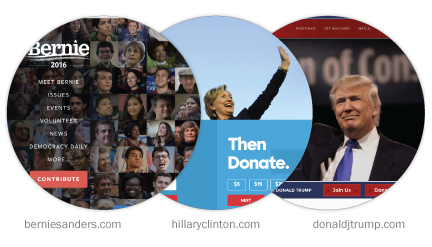 Two separate studies, one examining the official campaign websites of Hillary Clinton, Bernie Sanders and Donald Trump from May 1 – June 15, 2016, and another looking at the content posted on the candidates’ Facebook and Twitter accounts from May 11 – May 31, 2016, find that:

Clinton’s campaign has almost entirely bypassed the news media while Trump draws heavily on news articles. Clinton’s website offers two main sections for campaign news updates, both of which mimic the look and feel of a digital news publisher, but oriented around original content produced in-house. Trump, on the other hand, mostly posts stories from outside news media on his website. This pattern is also evident on social media, where 78% of Trump’s links in Facebook posts send readers to news media stories while 80% of Clinton’s direct followers to campaign pages. On Twitter, a similar tendency emerges in what each links to. Sanders, for the most part, falls in between the two.

On websites, citizen content is minimized or excluded altogether; in social media, Trump stands out for highlighting posts by members of the public. Unlike previous cycles, none of the sites offers the user the option to create a personal fundraising page, nor do their news verticals have comment sections. And only Sanders affords supporters the ability to make calls on his behalf, offering customized scripts; the other candidates limit outreach to donation requests and email and volunteer sign-ups. Moreover, it was rare for any of the three to repost material on social media from outsiders (there were almost no re-shares on Facebook and only about two-in-ten tweets from any of the candidates were retweets). Only Trump tended to include members of the public in his reposts: 78% of his retweets were from members of the public, compared with none of Clinton’s and 2% of Sanders’. Trump’s focus on the public also stands apart from 2012, when only 3% of Obama’s tweets during the period studied and none of Romney’s retweeted members of the general public.

None of the three websites featured any distinct section addressing specific voting groups or segments of the population – a popular feature of campaign websites in 2008 and 2012. In 2012, Obama’s campaign offered opportunities to join 18 different constituency groups, while visitors to Romney’s website could choose from nine different voter group pages. In 2008, both candidates offered around 20 such dedicated pages. In 2016, this feature is no longer present. There are still “issue” pages which explain the candidate’s position on certain issues but do not allow for longer-term ways for voters to identify with the candidate or connect with other supporters. 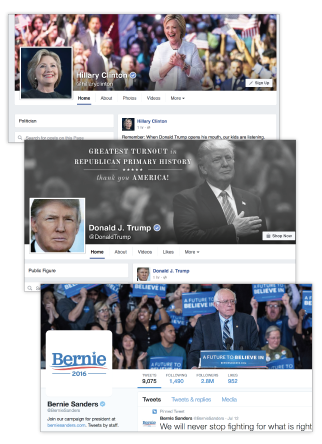 Facebook and Twitter usher in a new age in audiovisual capabilities. Candidates were already experimenting with regularly posting videos in 2008 and 2012 as YouTube increased in popularity, though to a minimal degree. By contrast, Clinton posted about five videos a day on Facebook and Twitter during the time period studied and embedded video in about a quarter of both her total tweets and Facebook posts. Trump, who averaged about one video a day on social media, was least likely to include regularly updated videos on either social platform (only 2% of his tweets, for example).

These are some of the findings from a two-part study of how the presidential campaigns serve as direct sources of news and information to the public. The analyses of social media posts and websites represent a time period in the campaign when Trump had become the presumptive Republican nominee and Clinton was still trying to secure the nomination as Sanders fought on. Also included is a look over time at evolution of campaign information available online, from web portals and news sites to the websites of the presidential campaigns themselves.

Next: 1. Presidential candidates’ changing relationship with the web
← Prev Page
You are reading page1Page2Page3Page4Page5Page6
Next Page →

How the Presidential Candidates Use the Web and Social Media
Trump, Clinton Voters Divided in Their Main Source for Election News
Seven-in-Ten Reddit Users Get News on the Site
Winning the Media Campaign 2012
Trump, Clinton Supporters Differ on How Media Should Cover Controversial Statements