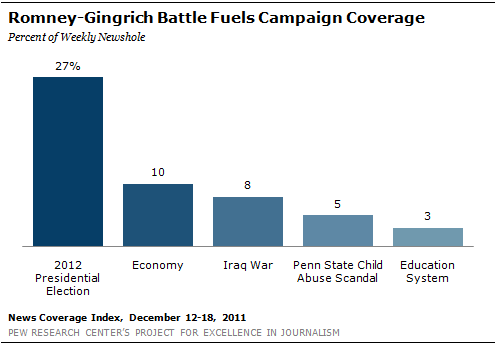 Coverage of the 2012 presidential race reached its second highest level of the year last week and the campaign narrative increasingly focused on the battle between Newt Gingrich and Mitt Romney, fueled in part by conservative commentators beginning to weigh in on the choice between them.

From December 12-18, the campaign accounted for 27% of the newshole, according to the Pew Research Center’s Project for Excellence in Journalism, up from 24% the previous week.

That marks the fifth time in seven weeks that that the campaign has been the top story in the U.S. news media as measured by PEJ’s News Coverage Index, which tracks the media agenda by monitoring 52 different news outlets from newspapers, online, cable news, broadcast news and on radio.

The race for president was the No. 1 story last week in three of the five media sectors studied, network news, radio news and particularly cable news, where it accounted for a little more than half (51%) of the airtime studied.

While attention to the campaign grew, the narrative also narrowed, focusing on the two GOP candidates perceived to be the frontrunners for the nomination. Former House Speaker Newt Gingrich was the primary figure in 49% of the week’s campaign stories. Mitt Romney was the primary focus in 32%. (To register as a primary newsmaker, a figure must be mentioned in at least 50% of a story.)

In other news, coverage of the economy, the No. 2 story, continued to decline last week, dropping to 10% of the newshole studied, down from 14% last week and 17% the week before that. The majority of coverage was about the continuing Pennsylvania Avenue battle over whether to extend the payroll tax cut. A related subject, the threat of a government shutdown that was eventually averted, was the seventh story, accounting for 3% of the newshole.

The formal end of the eight contentious years of U.S. military involvement in Iraq, meanwhile, went out with a relative whimper. It measured as the third biggest story of the week, filling 8% of the newshole studied. That was highest level of coverage about Iraq since August 30-September 5, 2010 when President Obama announced the end of the U.S. combat mission there.

Even with last week’s increase in coverage, however, overall attention to Iraq in 2011 fell to less than 1% of the newshole. That marks a steep four-year decline in coverage after the conflict was the No. 1 story (15%) in 2007. If there was a theme that echoed throughout last week’s press narrative, it was uncertainty and concern about the kind of Iraq that U.S. troops were leaving behind.

The No. 4 story last week was the scandal triggered by the arrest of former Penn State assistant football coach Jerry Sandusky on charges of sexually assaulting young boys (accounting for 5% of the newshole). That marked the fourth time in the last six week that the case has finished among the top five weekly stories. Last week, some legal observers were surprised when Sandusky waived a scheduled preliminary hearing.

Rounding out the top five subjects was a series of different stories about the U.S. educational system (3%), including a look the proliferation of online schools.

For all intents and purposes, the media treated the GOP presidential fight as a two-man race last week. Other than Gingrich and Romney, the GOP candidate who got the most press attention last week, Ron Paul, was a dominant newsmaker in a modest 6% of the campaign stories.

The week started off poorly for Romney as the media discussed whether his offer of a $10,000 wager with Rick Perry during a December 10 debate made him seem out of touch with the average and economically stressed American. 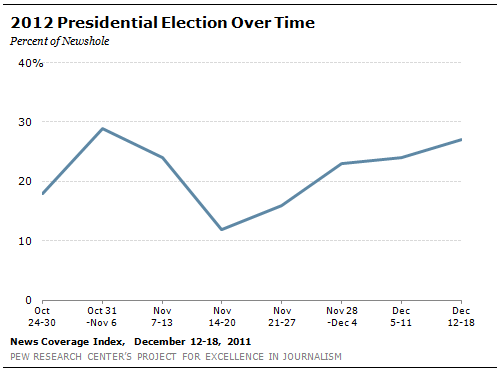 A December 12 ABC report noted that “from the debate site at Drake University in Des Moines to the Twitter verse, the former Massachusetts governor’s audacious wager was the only thing anyone was talking about.” And in many media quarters, it was treated as a gaffe.

Two days later, a Wall Street Journal story cited polling data that shed light on both the Gingrich phenomenon and the electability issue that dogs him. While Gingrich had opened up a 17-point lead over Romney among Republicans in the latest Wall Street Journal/NBC News poll, the story added that “half of all voters say they wouldn’t vote for Mr. Gingrich if he were the Republican nominee, compared with 44% who say they wouldn’t vote for Mr. Romney.”

Faced with polls showing Gingrich leading him, Romney made news by becoming noticeably more aggressive in his attacks on his rival.

“Mitt Romney is pulling out all the stops, going after Newt Gingrich with just nineteen days till the Iowa caucuses,” asserted MSNBC anchor Tamron Hall on December 15. One of those attacks, widely repeated in the campaign echo chamber, was an interview with the New York Times in which Romney appeared to characterize Gingrich as “zany.”

And as Romney began to sharpen his attacks on Gingrich, some in the conservative media universe—perhaps mindful of the obstacles facing Gingrich in a general election—also trained their guns on him. One notable case was the influential National Review magazine’s “anti-endorsement” of the former Speaker.

Appearing on Bill O’Reilly’s Fox News Channel show on December 15, popular conservative talk host Glenn Beck blasted Gingrich as too liberal, saying “he is not a small government guy. I think he would be an awful president.”

Addressing the conservative media attacks on Gingrich during a CNN appearance on December 15, analyst John Avlon declared that “You’re starting to see these attacks [have] an effect. You’re starting to see Newt Gingrich’s poll numbers soften just a bit…The conservative movement is trying to throw themselves in front of the Newt bus…because they know he would be a disastrous nominee for the GOP.”

And so a week that started with Romney being attacked for an ill-conceived bet ended up with Gingrich under a fairly concerted assault from some right-leaning media heavyweights.

Coverage of the economy (10%) hit a five-week low last week, but it did lead in one media sector, online news, where it filled 16% of the newshole studied. The dominant storyline by far, was the legislative maneuvering over whether to extend payroll tax cuts that are due to expire at the end of the year. By week’s end, the big news was that the Senate had overwhelmingly approved a measure to do that. (But this week, the House balked, making the fate of the bill uncertain.)

The final departure of U.S. troops from Iraq generated a spike in media attention (8%) to a war that had virtually vanished from the headlines, but much of that coverage was cautious and subdued. On the December 15 NBC newscast, correspondent Richard Engel didn’t paint a very optimistic portrait of what the troops are leaving behind.

“I am worried about what happens in this country,” he said. “I’m worried that the violence could return…The infrastructure in this country is still very poor. In many parts of Baghdad, there are only a few hours of electricity every day.”

The Penn State scandal re-emerged last week among the top five week weekly stories (5%) after Sandusky’s legal team opted against a preliminary hearing. The story generated the most attention on network television (9%). Coverage of education (3%) was largely the province of the nation’s newspapers last week, where it registered as the No. 1 subject (14% of front-page coverage). 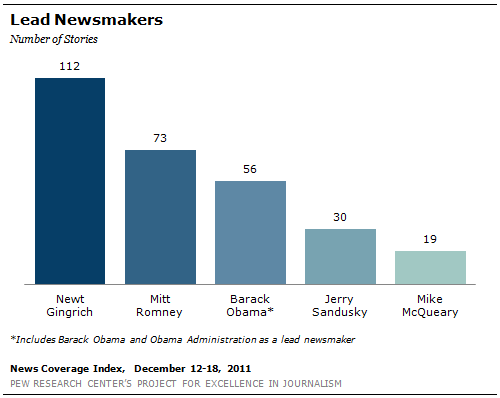 The Republican primary battle produced the top newsmakers last week with Newt Gingrich registering as a dominant newsmaker in 12% of all the stories studied by PEJ, followed by Mitt Romney (8%) at No. 2. (Ron Paul was No. 6, at 1%).

President Obama, who has been trailing behind the Republican candidates in the amount of coverage in recent weeks, was the third biggest newsmaker, at 6%.

The No. 4 and 5 newsmakers last week were key figures in the Penn State sexual abuse scandal—primary defendant Jerry Sandusky (3%) and assistant Penn State coach Mike McQueary (2%) who testified last week that he had seen Sandusky assaulting a young boy in the shower.

Trump Pushes the 2012 Race into the News

A Message From Osama Puts Terror in the News

Politics, War, and a Crucial Speech Top the News Index