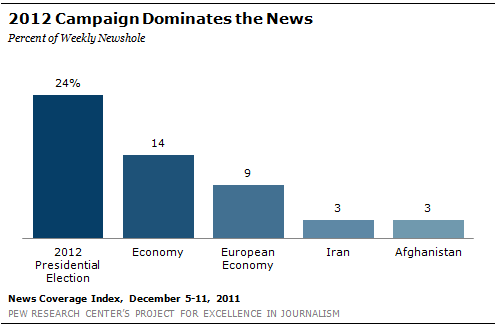 The latest GOP frontrunner, Newt Gingrich, has now been become the top campaign newsmaker after weeks of attention to Herman Cain and allegations about his personal behavior.

The 2012 presidential campaign once again topped the news agenda, accounting for 24% of the newshole during the week of December 5-11, according to the Pew Research Center’s Project for Excellence in Journalism. That was only slightly higher than the previous week’s level of 23%.

The focus of that coverage was squarely on Gingrich, the former House speaker who has quickly risen to the top of the polls. He was a dominant newsmaker in 47% of all campaign stories studied last week, nearly twice as prevalent the next biggest newsmaker, Mitt Romney. (To register as a dominant newsmaker, someone must be featured in at least 50% of a story.)

The coverage, which was heaviest on radio news (42% of airtime studied) and cable news (39%)—the two sectors that include the ideological talk shows—largely examined his dramatic rise in those polls, but also raised questions about his temperament and record.

Nearly one-third of last week’s coverage of the economy—the No. 2 story at 14%—focused on President Barack Obama’s highly publicized Kansas speech in which he advocated policies to help the middle class. Among the issues raised in the speech was the impending expiration of the payroll tax cuts. The debate in Washington over how to pay for the tax cuts has broken down along the typical partisan lines of spending reductions versus taxing the wealthy. The cable and radio talk shows reflected that divide last week.

At No. 3 last week was the European debt crisis, which accounted for 9% of the newshole and was the No. 1 story in the newspaper sector—where it accounted for 13% of the front-page coverage. Concerns about default by the more vulnerable countries in the European Union were momentarily alleviated when a plan was adopted to penalize those nations and instill discipline on the eurozone.

U.S. relations with Iran were in the news last week after an American drone was reported to have fallen into the hands of that country. That subject accounted for 3% of the newshole last week and was the No. 4 story. It marked the first time since October 10-16 that Iran ranked among the top five stories in a given week.

Also accounting for 3% of the newshole was the ongoing conflict in Afghanistan, where last week a suicide bomber killed approximately 60 Shiite pilgrims in Kabul. Graphic images of the aftermath were displayed on the front page of The New York Times and several other major newspapers around the country on December 6.

The campaign narrative last week was clearly focused on the rise of Newt Gingrich and the impact on Mitt Romney’s campaign. A surge that had Gingrich leading Romney by double digits in some polls reinforced the idea that this was the former speaker’s moment.

“Newt Gingrich, all but forgotten in the presidential race until just a couple short weeks ago, has stepped on the gas, blown right past Mitt Romney,” said CNN’s Brooke Baldwin on December 7, referring to a Gallup poll showing Gingrich leading Romney by 15 points. “It’s as if Newt Gingrich claimed Herman Cain’s supporters lock, stock and barrel.” Cain suspended his campaign on December 3.

Some political reporters noted that few would have expected such a comeback from Gingrich, whose campaign was nearly written off months before, after weak poll numbers and staff defections. Referring to Romney’s campaign on the December 8 Early Show, CBS’s Jan Crawford noted that “They expected a serious challenger, they did not expect it to be Newt Gingrich, and you know what—who did? His campaign was written off for dead six months ago.”

When it came to Gingrich’s past, the media had plenty to report on last week, including House minority leader Nancy Pelosi’s threat to bring past ethics violations against Gingrich to light.

“Part of Gingrich’s challenge is showing that he has grown since his more bombastic days in Congress, when he engineered the 1994 Republican takeover of the House but left office as a deeply unpopular figure,” reported The New York Times on December 5.

But even his personal background, including several marriages and known infidelity, could play well with voters seeking an authentic candidate, said the Times story.

The week also brought with it a deeper focus ahead on the Iowa caucuses, which take place on January 3 and mark the opening bell of nominating contests around the country. 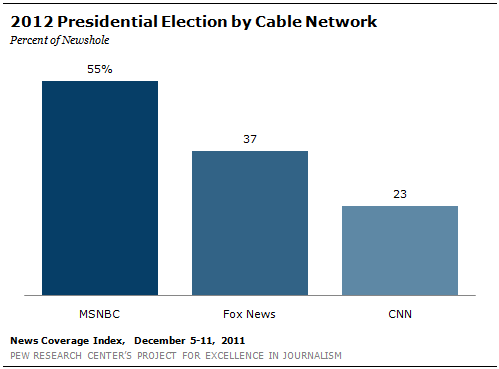 MSNBC’s Rachel Maddow, on her December 7 program, suggested that the GOP campaign had reached a new stage. “With less than a month to go before voting in the Iowa caucuses, on a night like this in Washington, the Republican field is starting to appear settled.”

NPR’s Cokie Roberts noted that while a high proportion of Iowa’s voters are evangelical Christians, they have not flocked to Romney. Romney’s Mormon faith, according to some polls, is possibly a deterrent to some religious conservatives.

“Republicans in Iowa, just like the rest of the country, have really been looking for someone other than Romney, so what they do will count,” said Roberts on December 5. She noted that those Iowa Republicans seem to be flocking to Gingrich, especially after the suspension of Cain’s campaign.

On Tuesday, December 6, Barack Obama delivered an economic speech in Osawatomie, Kan., arguing for fairer policies to protect the middle class and challenging claims that he is engaging in class warfare.

The speech, combined with the broader debate about taxes, accounted for more than half of all economic coverage last week, the No. 2 story.

The speech drew some strong reactions from commentators in the media, including Sean Hannity, who on his December 7 Fox News Channel program remarked that “President Barack Obama put his divisive, class-warfare rhetoric on full display yesterday during an economic event in Kansas.” But on The Huffington Post on December 6, former Clinton labor secretary Robert Reich called it “the most important economic speech of [Obama’s] presidency.”

The debate about tax policy hinges on the payroll tax cut, which Democrats are trying to extend after it is set to expire in January. One of the storylines that emerged last week is that the issue has caused some divisions among Republicans, as The Los Angeles Times explained on December 9: “Typically it’s the GOP that operates from a singular playbook, particularly on tax policy: Republicans want lower taxes, while Democrats tend to hold a variety of positions when it comes to taxes and economic issues. But the payroll tax debate has left congressional Republicans arguing among themselves.”

The No. 3 story, the European debt crisis, was focused early in the week around reports that the   ratings firm of Standard & Poor’s had placed 15 out of 17 key eurozone nations on downgrade warning as the crisis continued to deepen. Yet later in the week, new reports of some progress in the region boosted stocks and resulted in more hopeful assessments.

News reports on December 9 told of an agreement that had been worked out among 23 European leaders, many from countries that use the Euro, to set caps on government spending and borrowing. While the agreement was hailed, “the failure to win full approval from all E.U. nations appeared to be a political blow to European unity,” according to The Washington Post.

Most of last week’s coverage of Iran, the No. 4 story, was triggered by a video showing a U.S. drone that Iran said it had captured. Another video showing Robert Levinson, a retired FBI agent who was has been in captivity in Iran for five years, was made available to the public by the U.S. government and attracted significant airtime.

An unusual act of sectarian violence drew media attention to the ongoing conflict in Afghanistan, the No. 5 story last week. The attack, reportedly by a militant Pakistani Sunni group, killed approximately 60 Shiites in Kabul on December 6. Some of the coverage examined whether the incident marked a new and more dangerous turn in religious violence in that war-torn country. 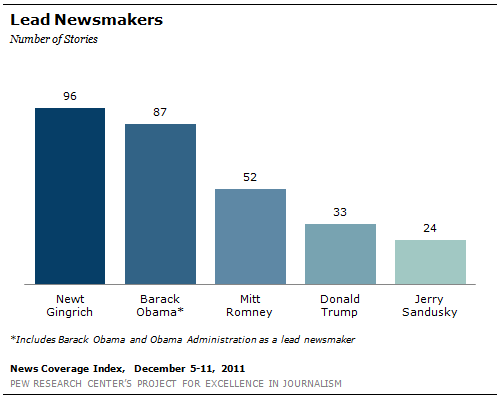 At No. 2 was Barack Obama, himself a candidate for reelection, and much of his media attention last week stemmed from his Kansas speech in which he evoked the rhetoric of Teddy Roosevelt and laid out a vigorous defense of the middle class and certain Democratic economic policies. He was the key figure in 9% of stories, up from 6% the week before.

At No. 4 was Donald Trump (3%), who had earlier contemplated seeking the GOP nomination, who made news last week for his planned Republican debate that is to be held in Iowa on December 27. Mitt Romney, Ron Paul, Rick Perry, Michele Bachmann and Jon Huntsman have all declined to attend the Trump debate.

Finally, the No. 5 newsmaker last week was former Penn State University assistant football coach Jerry Sandusky (3%), who was arrested a second time on new charges of sexually abusing young boys. He has been among the top five lead newsmakers in two of the last three weeks.

Gingrich Bows Out as the General Election Battle Takes Shape

The Media Turn the GOP Race into a Two-Man Battle