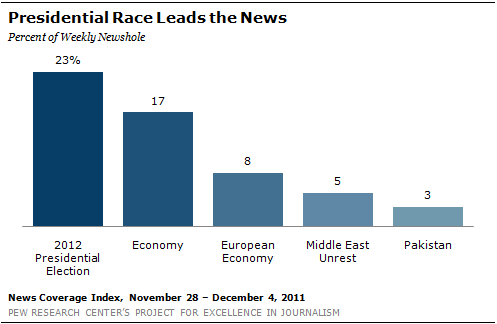 In the wake of earlier allegations of sexual harassment, the November 28 news that another woman—Ginger White—claimed to have engaged in a 13-year affair with Cain had the media frantically assessing the fallout for his troubled campaign. That question was answered definitively on December 3, when Cain suspended his run for the White House.

Overall, the 2012 presidential campaign accounted for 23% of the newshole during the week of November 28-December 4, according to the Pew Research Center’s Project for Excellence in Journalism.

Interest in the campaign was especially high on cable news, where the subject accounted for 47% of the airtime studied. It was there that Cain tried to get in front of the story in a November 28 interview on CNN, and there that Fox News’ Sean Hannity provided a friendly forum for the candidate—but to little avail.

Following the late October allegations of sexual harassment against him, the former pizza CEO who rose from relative obscurity to frontrunner status has been dominating coverage of the volatile Republican nomination fight. Since the week of October 31-November 6, Cain has been the top newsmaker in campaign stories every week. (To register as a dominant newsmaker, someone must be featured in at least 50% of a story.)

As the No. 2 story last week, coverage of the U.S. economy was fueled by a variety of subjects, including the soon-to-expire payroll tax cut, unemployment numbers, holiday retail sales and evacuation orders in the Philadelphia and Los Angeles Occupy Wall Street encampments. Overall, coverage of the economy accounted for 17% of the newshole, and was the No. 1 story last week in three sectors: newspapers at 23%, online at 15% and radio at 27%.

The European debt crisis kept that region in the media spotlight as the No. 3 story last week, at 8% of the newshole. The news media followed the drama as the Federal Reserve and other central banks took measures to ease debt in Europe, which was followed by a surge in stocks around the world on November 30.

The No. 4 story last week (5%), unrest in the Middle East, was fueled by coverage of Egyptian parliamentary elections, the first since the ouster of former president Hosni Mubarak.

Finally, the No. 5 story focused on relations between the U.S. and Pakistan, which reached a new height of tension after a U.S./NATO airstrike killed 24 Pakistani soldiers. The story accounted for 3% of the newshole.

After carrying on with his campaign despite multiple allegations of sexual harassment, Republican hopeful Herman Cain’s faced another challenge after Ginger White’s claims of a longstanding affair last week.

After Cain tried to pre-empt the damage by discussing those claims on the Nov. 28 edition of CNN’s The Situation Room, analysts immediately began assessing not if, but when his campaign would come to an end.

Cain described how he saw the nature of his relationship with White to CNN’s Wolf Blitzer: “Trying to help a friend because not having a job, etc., and this sort of thing.”

On December 2, Cain was a guest on Sean Hannity’s Fox News Channel’s program, where he received a friendly reception. Hannity suggested that the evidence for White’s claims was suspiciously absent:

But Cain demurred, saying “Sean, do me a favor. Let’s not play detective.”

The Cain campaign’s public response to this and other allegations caused at least one commentator, Ken Vogel of Politico, to say on the December 2 edition of Ed Schultz’s MSNBC show that “this campaign has been just a study in how not to handle crisis communications”

As the week wore on, and as Cain’s fate as a candidate looked shakier, media outlets discussed how the GOP field might be affected if he dropped out of the race.

“It is having an effect,” said John Dickerson, CBS News political director, on November 29, referring to what Cain’s withdrawal could mean for contenders Newt Gingrich and Mitt Romney. “Gingrich benefits…but it’s not a clean transference. Cain’s message was ‘I’m not of Washington, I’m not a politician.’ Gingrich is both of those things. Mitt Romney might benefit a little because he’s a businessman and that was a key Cain appeal.” 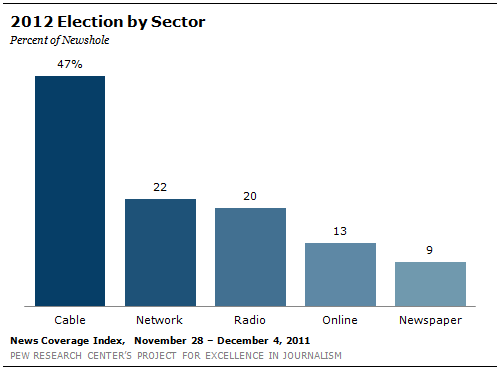 When Cain did bow out of the race on December 3, an Associated Press story described him as “defiant.” The same story characterized his  announcement as “a bizarre piece of political theater even for a campaign that has seemed to thrive on defying convention,” noting the festive atmosphere surrounding the event and the fact that his staff was rallying supporters to vote for Cain just minutes before he took the podium to end his candidacy.

Last week, coverage of the No. 2 story, the U.S. economy, took a number of different directions. About a quarter of the economic newshole focused on the impending expiration of the payroll tax cut—with the debate in Washington over how to fund those tax cuts breaking down along familiar partisan lines.

Other prominent economic storylines included a new jobs report that showed the unemployment rate had lowered to 8.6%; new developments in the Occupy Wall Street movement, and the early returns on holiday retail sales. Media attention to the Occupy Wall Street protest movement has died down substantially, however, since its peak during the week of November 14-20, when it accounted for 13% of the overall newshole. Last week, it made up just 3%.

Given the context of a deeply troubled economy, many media accounts suggested that post-Thanksgiving retail sales—starting on “Black Friday”—seem to take on a more urgency as analysts saw the numbers as an economic bellwether.

“Retailers were under a lot of pressure to perform well given how important the post-Thanksgiving days are,” reported the Wall Street Journal on December 1. A number of reports suggested that sales were strong with Black Friday sales were said to be up 6.6% from a year before.

Other news reports about the economy tracked the continued clashes between Occupy Wall Street protesters and law enforcement officials. In Los Angeles, “a chaotic scene…Hundreds of officers, in riot gear started tearing down tents at midnight, firing rubber bullets, making hundreds of arrests, as you can see here, even plucking chanting demonstrators from trees,” described Josh Elliot at ABC’s Good Morning America on November 30.

The No. 3 story, the European debt crisis, created drama for news outlets to follow last week as President Obama met with European Union leaders to discuss how to address the deepening Euro crisis. When it was announced that the Federal Reserve would work with European central banks to extend money, a sigh of relief was almost audible as news outlets reported stock increases around the world.

Much of the Middle East coverage (the No. 4 story) focused on Egyptian parliamentary elections, which were held on November 30, the first such elections held since the end of Hosni Mubarak’s rule. The New York Times on December 1 reported on the surprising popularity of the Islamist parties that, together, won a majority of the votes. “The unexpected rise of a strong ultraconservative Islamist faction to the right of the [Muslim] Brotherhood is likely to shift Egypt’s cultural and political center of gravity to the right,” said the Times.

Finally, the No. 5 story last week was U.S. relations with Pakistan, which were strained even further when a U.S.-NATO strike killed 24 Pakistani troops on November 25. Much of the coverage last week focused on the launch of a U.S. military investigation into how the strike happened, as well as how the U.S. would attempt to repair its relations with Pakistan.

Herman Cain, the GOP candidate whose mortally wounded campaign was the focus of coverage last week, was also the lead newsmaker overall in the news, a dominant subject in 10% of stories studied.

Except for a brief reprieve during the week of November 14-20, when Penn State former assistant coach Jerry Sandusky was the top newsmaker, Cain has been at No. 1 since the week of October 31-November 6. 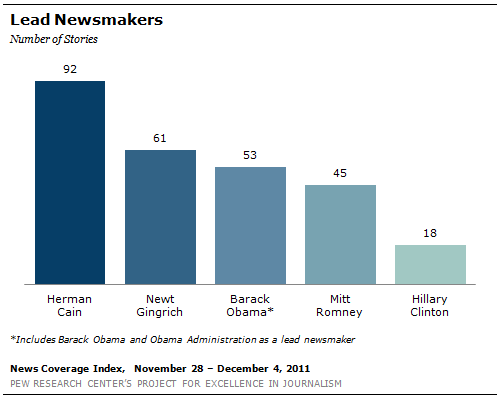 At No. 2 last week was another Republican hopeful Newt Gingrich, who has found himself at the top of the polls and who may benefit from some of the voters who had been loyal to Cain. Gingrich was a dominant newsmaker in 6% of stories last week. His chief rival at the moment, former Massachusetts governor Mitt Romney, was the No. 4 newsmaker last week (5%).

Barack Obama, typically the No. 1 newsmaker, was No. 3 last week, the focus of 6% of stories.

Finally, at No. 5, was Secretary of State Hillary Clinton (2%) who became the first top U.S. official to visit Myanmar in 50 years.