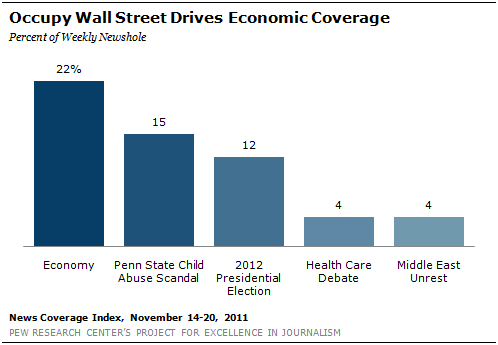 A series of police crackdowns resulted in the biggest week of Occupy Wall Street media coverage since the protests began two months ago. And for the second week in a row, the stunning sexual abuse scandal at Penn State University registered as the No. 2 story in the nation.

Last week, the U.S. economy was the No. 1 story at 22% of the newshole, with the majority of that coverage focused on the confrontations between protesters, law enforcement, and the city governments that preside over the public spaces that have become encampments. All totaled, the Occupy Wall Street story accounted for 13% of the overall newshole during the week of November 14-20, according to the Pew Research Center’s Project for Excellence in Journalism.

That coverage marked a major spike from the week before when media attention to the protests had dropped to just 1% of the newshole. It surpassed even the week of October 10-16, when the protests, largely focused on income inequality, filled 10% of the newshole as the demonstrations expanded around the country and partisans began turning it into a major political issue.

News about the demonstrations unfolded dramatically last week, as Occupy sites in Oakland, Portland and other cities were cleared by law enforcement, precipitating a spike in arrests and several injuries. And coverage really took off when New York’s Zuccotti Park, the birthplace of the movement, was cleared of encampments for cleaning on Tuesday, November 15.

The Penn State University sexual abuse scandal maintained its prominence in the news agenda, filling 15% of the newshole, down modestly from 17% the previous week. In each of the past two weeks, the Penn State saga has generated more coverage than any other sports-related scandal since PEJ began tracking news coverage in January 2007.

While much of the earlier attention fell on the iconic head football coach Joe Paterno, last week’s coverage revolved around former assistant coach Jerry Sandusky, who is alleged to have sexually abused young boys over a 15-year period.

Sandusky’s high-profile November 14 television interview with NBC’s Bob Costas made the embattled coach the No. 1 newsmaker last week, as he registered as a dominant newsmaker in 9% of the week’s stories. It also helped make the scandal the No. 1 story on cable (29% of the airtime studied last week) and network TV (21%). (To be a dominant newsmaker, a figure must appear in at least 50% of a story).

Coverage of the No. 3 story last week, the 2012 presidential campaign, plunged to 12% of the newshole, half the previous week’s total of 24%. The media’s interest in sexual misconduct allegations against GOP candidate Herman Cain largely faded, in part because of another distraction facing the Cain campaign after the former pizza restaurant CEO fumbled on a question about what he would do in Libya. Last week, Cain was the No. 3 newsmaker overall, featuring prominently in 4% of stories.

At No. 4 last week was the Obama administration’s health care law, which resurfaced in the news when the Supreme Court announced on November 14 that it would decide on its constitutionality. That subject accounted for 4% of the newshole last week, the most attention it has received since the week of January 31-February 6, 2011, when a federal judge in Florida ruled against the law. (That week, it registered as the No. 3 story, at 7% of the newshole).

And further unrest in the Middle East accounted for 4% of the newshole as the unrest and violence in Syria caused the Arab League to suspend that country’s membership. The media reported on the fighting that claimed at least 90 lives there.

The Occupy Wall Street protests, which had been slowly fading from the media’s radar screen, generated plenty of headlines last week when several cities around the country, including New York, took steps to control the encampments.

On Monday, November 14, law enforcement officials in Oakland, Calif., and Portland, Ore., cleared out encampments, resulting in dozens of arrests. On Tuesday, police in New York cleared out Zuccotti Park, resulting in dozens more. Much of the media attention throughout the week focused on New York, but several clashes with police drew attention as well, including an 84-year-old woman who was pepper sprayed by Seattle police. And a late-week “national day of action,” marking the two-month anniversary of the protests, attracted more media interest as well.

The actions by officials around the country prompted the media to weigh in on the movement, with some of that commentary falling among predictably partisan lines.

Rev. Al Sharpton, on his new MSNBC program Politics Nation, spoke over live footage of the national day of action demonstrations on November 17. “We are now looking at a live picture of thousands of protesters who are planning to get across the Brooklyn Bridge … We that march, we that engage in civil disobedience, are not doing it because people like to get arrested, or people like to be out in the cold. We do it because you must dramatize what is going on to have those that are ignoring it have to address the problems.”

Others were not so sympathetic. Fox News Channel host Bill O’Reilly described the lurid side of Occupy Wall Street, including the discovery of drug paraphernalia and instances of theft and violence. “So, the Occupy Wall Street movement is dead, finished as a legitimate political force in this country. And that’s a good thing,” concluded O’Reilly on his November 16 program.

As for the future of the movement, news outlets explored that angle too. On November 15, CBS reporter Michelle Miller interviewed one protester who sounded hopeful on that evening’s newscast. “Was this a preemptive strike?” asked Miller, in reference to the evacuation of Zuccotti Park. “I assume so,” said the protester, “but it was really badly calculated because it’s only going to galvanize us. We’re only going to be stronger because of this.”

But on that same day, The Huffington Post described a movement that seemed at least momentarily disoriented. “By 4 a.m., the park was cleared and hundreds of protesters, uncertain of their next move and blocked by police barricades, wandered the financial district.” 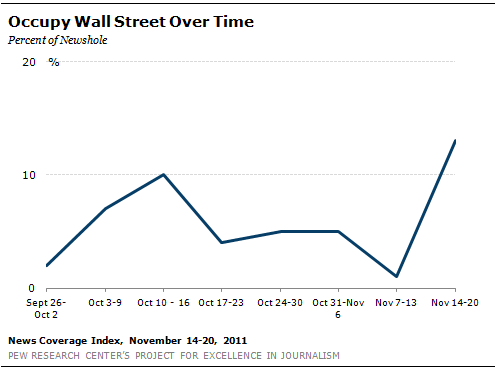 And a November 15 Washington Post story summarized one of the chief challenges that the Occupy Wall Street movement faces going forward. “The movement began as a protest of major economic and political issues, but lately the most divisive issue has become the protests themselves,” the story noted. “The Occupy Wall Street encampments that formed across the country to spotlight crimes committed on Wall Street have become rife with problems of their own.”

The Penn State scandal spotlight shone brightly on former football coach Jerry Sandusky last week after his prime-time NBC interview raised more questions about the sexual molestation charges against him. The scandal was the No. 2 story last week at 15% of the newshole, with much of the focus on Sandusky’s response to questions by Bob Costas about the allegations.

“His words, in his voice, were as hard to listen to as they were difficult to turn away from. And the interview instantly became admissible evidence in a future trial,” reported Brian Williams on the November 15 broadcast of Nightly News.

In the interview, conducted for NBC’s new program Rock Center, Sandusky admitted to showering with the young boys he mentored through a charity he had founded for troubled youth, but denied any sexual intent on his part. When asked if he was attracted to young boys, Sandusky repeated the question aloud, ultimately taking 14 seconds to answer in the negative.

Shortly after the interview came the media assessments. Many of them analyzed Sandusky’s performance, interpreting his words as further evidence of guilt. And a few questioned the judgment of Sandusky’s attorney for allowing his client to speak openly on the air. There were virtually no reports suggesting Sandusky had improved his image by granting the interview.

The No. 3 story last week (12%), the presidential campaign, drew significantly less coverage than it had the week before. In part this was due to fading media interest in sexual misconduct accusations that had been leveled by a number of women at Herman Cain, whose rise in the polls had placed him in the spotlight. Yet Cain still made news thanks to a video showing him trying in vain to respond to a policy question about Libya during a visit to a newspaper.

The Obama administration’s signature health care reform bill was the No. 4 story last week (4%) when the Supreme Court said on November 14 that it would hear a challenge to the constitutionality of the law. In part because the ruling is likely to come during the summer of 2012, shortly before the November presidential elections, some of the coverage turned to the political impact of any decision on the president’s reelection bid.

Much of the attention on the Middle East last week (No. 5 at 4% of the newshole) was on Syria and its embattled president, Bashar al-Assad. As former Syrian troops joined the anti-government uprising and violence increased, video footage from the region chronicled the chaotic and dangerous situation in a country on the brink of civil war.

For the first time in three weeks, someone other than presidential candidate Herman Cain was the top newsmaker overall—Jerry Sandusky. Last week Sandusky was a dominant newsmaker in 9% of stories, a week after former Penn State head coach Joe Paterno, who was fired on November 9, was the key figure in the spotlight. 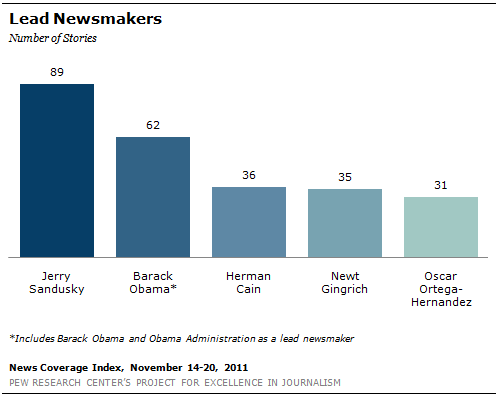 The No. 2 newsmaker last week, Barack Obama, has not been the No. 1 newsmaker since the week of October 24-30. Normally the most-covered individual by the mainstream media, Obama was featured prominently in 6% of stories last week.

At No. 3 was Cain, whose prominence in the media overall was down substantially to 4%, from 12% the week before. Another Republican presidential hopeful, Newt Gingrich, enjoyed not only a resurgence in the polls last week but also in media attention. He was the No. 4 newsmaker and the focus of 4% of stories overall last week.

Finally, at No. 5, was Oscar Ortega-Hernandez, the man charged with attempting to assassinate President Obama in a shooting incident the previous week. Ortega-Hernandez was arrested after a several-day search which ended in western Pennsylvania. He was the focus of 3% of stories last week.