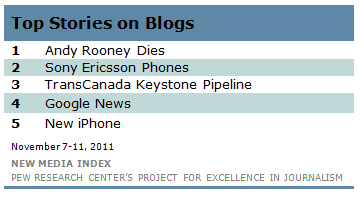 For the week of November 7-11, the No. 1 story on blogs was the November 4 death of venerable commentator Andy Rooney, according to the New Media Index from the Pew Research Center’s Project for Excellence in Journalism.

Rooney’s popular essays capped CBS’s 60 Minutes broadcasts for more than 30 years. He was a writer even before the age of television as a correspondent for The Stars and Stripes during World War II, and he had worked at CBS for more than 60 years. His first on-air essay debuted July 2, 1978 after he had served as a producer and narrator for a series of broadcasts on CBS. And by his final send-off on October 2, 2011, Americans knew him as the bushy-browed and somewhat cantankerous observer of American life.

Despite Rooney’s status as an old-school newsman, bloggers revered him for bringing a distinct new mode of communication to the news.

“Rooney was a staple in our weekly ‘Let’s spend 2 minutes complaining about something pretty mundane’ routines, and when he retired 6 weeks ago, we knew we’d miss him terribly,” wrote Michelle Collins at the pop culture blog Best Week Ever, “Today, we’re sad to say goodbye forever. His stopwatch ticks no more.”

“I want to live and die like Andy Rooney,” wrote Maurilio Amorim, “After watching Mr. Rooney’s life from my seat in front of the TV since I was a child, I have come to the realization that when it came to work, he got it right.”

“As grumpy as he was, though, I think he did so with the best of intention,” wrote cpu at The Mad Computer Scientist’s Mind, “He always seemed to be able to cut through the sentimental crap and get right to the point on things. This is what I admired about him and, in many ways, I think how he inspired me.”

“The world has lost a special man in Andy Rooney,” wrote Gillian at Baby Talk without the Babble, “With deep respect, his homespun philosophies will be greatly missed. ‘Yes, Andy, I wish you could write forever, too!'”

Since PEJ began the New Media Index in January 2009, one trend has been the tendency of bloggers to devote considerably more attention than the mainstream press to the deaths of notable celebrities. Actors ranging from Leslie Neilsen to Elizabeth Taylor and musical icons such as Les Paul registered among the top five stories on blogs the week of their deaths.

The blogging community showed much less harmony over the No. 3 story: The State Department’s decision to study an alternative route for the TransCanada Keystone pipeline that would avoid environmentally sensitive regions of Nebraska.

This story, while popular online, filled less than 1% of the newshole in the mainstream media for the week of November 7-13.

In the blogosphere, the response primarily came from liberals applauding the decision, often with links to articles from sites like Inside Climate News and Think Progress.

“And, as improbable as it might have seemed only a few months ago, Nebraska stands poised to become the symbol of how unions and environmentalists and ranchers and young people from the Occupy Movement may be uniting to forge a kind of new progressivism,” wrote Ted Genoways at OneEarth.

Conservatives criticized President Obama, arguing that the delay in routing the pipeline essentially meant stopping a project that would have provided jobs and cheaper energy.

“Obama has killed a desperately needed pipeline. We lose 25,000 jobs and CHEAPER energy costs,” wrote Pamela Geller on Atlas Shrugs, “Obama needs to be called out… Where are the Republican warriors on the right? Aren’t they more afraid of what Obama and the uber left are doing to destroy this country than they are of the ankle-biting press? Considering the dire straits this nation is in, this is criminal.”

The fourth-biggest story in the blogosphere last week was news about Google, both its updated search algorithm and changes to the Google Reader RSS feed.

Bloggers generally supported the changes in the search algorithm meant to improve the “freshness” of search results. The new algorithm impacts about 35% of searches.

“Apparently, freshness is getting even more rewarded, having an impact on one out of three searches,” wrote Barry Schwartz on Search Engine Land, “That’s huge–though it’s unclear what it was before. For all we know, 35% of searches were already being impacted by freshness ranking.”

The response to Google Reader changes was much more negative. In a blog post entitled “Reader Redesign: Terrible Decision, or Worst Decision,” Brian Shih, a former Google employee, wrote that he thought the redesign was terrible. Several bloggers agreed.

“Aesthetic uniformity across products makes perfect sense,” wrote E.D. Kain at Forbes, “Unfortunately, the new Google Reader look is ugly. Really ugly… It’s not pleasant to read on at all, which sort of defeats the purpose of an RSS service… There’s almost no way Google could have blundered more disastrously here.” (Emphasis author’s.)

The other top stories on blogs related to mobile phones. The No. 2 topic involved a not-yet-released Sony Ericsson phone while the fifth-biggest story was the omnipresent iPhone.

Mobile phone bloggers were jazzed to see pictures of the Xperia Nozomi LT26i, a Sony Ericsson phone that does not have a release date or set price yet.

“It looks like the mobile phone has been well worth the long wait after watching its marvelous sleek and stylish design,” wrote MSN India.

And the new iPhone’s Siri personal assistant also had people talking. The iPhone 4S has a proximity sensor so the phone is able to determine how far away the user’s face is and whether or not to activate the Siri system, according to iFixIt. Bloggers were a little wary of this feature.

“Apple’s Siri virtual assistant is a bit of a creeper,” wrote Devindra Hardawar at Mobile Beat. 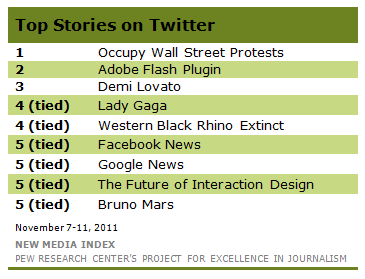 For the second time in three weeks, the Occupy Wall Street protests were the top story on Twitter–even in a week when coverage in the mainstream media diminished notably.

Last week, users shared videos of police actions at Occupy Cal and Occupy Oakland protests and overwhelmingly voiced their support of the protesters. In one video, “>police are seen hitting student protesters with batons at the University of California at Berkeley while students responded by chanting “stop beating students.”

“I don’t usually like group chants, but “Stop beating students” is 1 I support,” tweeted Alex UA.

“A PLAGUE UPON THOSE WICKED POLICE THAT DID THIS,” tweeted Deborah Maya.

The other video shows a line of police at Occupy Oakland where “>one police officer shoots the videographer with a rubber bullet. That video was also among the most popular last week on YouTube.

“If you haven’t seen this clip by a photographer shot by police with a rubber bullet at #Occupy Oakland, it’s chilling,” wrote Steve Silberman.

The second-biggest topic on Twitter was a story about Adobe announcing that it would no longer be developing a Flash browser plugin for mobile phones and instead focus on HTML5. The mobile Flash plugin is a way to watch video on mobile devices and was not supported on Apple devices like the iPhone and iPad.

In a Tech Crunch article about the demise of Flash, the author, MG Siegler, noted Steve Jobs’ dislike of Flash mobile plugin technology and wrote that Jobs “knew he was right. In his post [on Apple’s website] he outlined the need for a move towards technologies like HTML5, and now that’s exactly where Adobe is heading.”

Interaction with celebrities has become yet another popular use for Twitter. This past week singers Demi Lovato, Lady Gaga and Bruno Mars were among the hot topics on Twitter, as users shared and responded to posts from the stars. At least one or more celebrities–most often popular singers, with a particular focus on Justin Bieber and Lady Gaga–have been featured among the top five stories on Twitter in eight of the last nine weeks.

The No. 3 topic last week included photos that pop singer Demi Lovato tweeted, one of her with a new hair color and the other of her wearing a somewhat risqué outfit on the red carpet at the Latin Grammy Awards. Fans responded with their support of the singer and entertainment networks and publications asked fans what they thought.

Also in the top five, were a photo tweeted by Lady Gaga of her in a yet-to-be-released video and a link to a “>Bruno Mars video that has a tie-in to the popular Twilight movie series. Gaga has been one of the top topics on Twitter for two of the last six weeks.

Tied with Lady Gaga at fourth place was a story that the western black rhino was declared extinct, according to the latest assessment of threatened species by the International Union for Conservation of Nature. Tweeters were upset over the news and blamed humans.

“The African Black Rhino is officially extinct due to unchecked poaching. Not a good day to be a human being,” wrote Ben Mulroney.

And tied for fifth place with Bruno Mars were a handful of tech stories.

One covered Facebook page apps that help business users communicate with their fans. Some ideas included posting tweets to Facebook and adding a contact form. Another story widely shared was about using Google+ to connect with things users are fans of (much like the Facebook pages discussed in the previous story). The other tech story tied for fifth place was a piece on the future of interaction design, where the author writes about what he hopes digital tools will look like in the future.

On YouTube, two good Samaritans who apprehended a hotel robber in Los Angeles drew the most attention last week.

The November 2 surveillance video, released from the Los Angeles Police Department, showed the suspect, identified as 31-year-old Luis Rosales, who had entered the hotel lobby with a backpack and walked around the front desk. With a gun pointed at him, the hotel employee at the desk opened the cash register and handed money to the suspect.

Two hotel guests from Oregon–mixed martial arts experts in town for a mixed martial arts conference, according to press reports–stepped out of the elevator as the robbery was taking place, wrestled with the suspect and held him on the ground until the police arrived.

The third most popular YouTube video was connected to the top story on Twitter last week. The footage showed a line of police officers at the Occupy Oakland protest and during the filming, the videographer was shot with a rubber bullet by one of the riot police.

Unfortunately, this was a trend for the week, with the No. 5 news video on YouTube showing a Brazilian TV network cameraman shot in the chest while covering a confrontation between police and drug traffickers in a slum west of Rio de Janeiro. Press reports said the cameraman, Gelson Domingos da Silva, 46, did not survive the gunshot wounds despite wearing a bullet-proof vest. It was also reported that four alleged suspects were killed in the raid.

Blogs and Twitter Make the Grammys—and Chris Brown—the No. 1 Topic