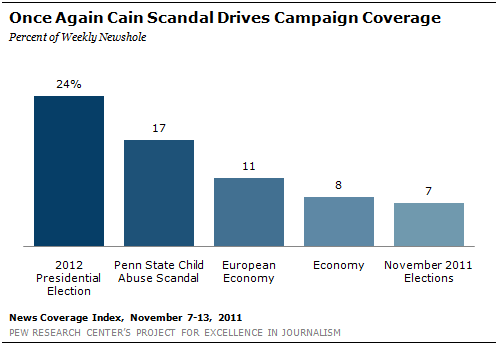 Two simmering scandals—one involving a presidential candidate and the other, a major university—fueled coverage of the two top news stories last week.

For the week of November 7-13, the 2012 presidential election was the No. 1 story, filling 24% of the newshole, according to the Pew Research Center’s Project for Excellence in Journalism. While down from 29% the previous week, it still represented the second biggest week of campaign coverage to date and the second week in a row that the presidential race topped the news agenda.

In both of those weeks, campaign coverage was driven by the allegations of sexual harassment against Republican contender Herman Cain. Last week, as several new accusers surfaced and Cain vehemently denied the allegations, the scandal accounted for more than half of all the campaign coverage studied by PEJ. And as was the case in the previous week, Cain was by far the leading overall newsmaker from November 7-13, appearing as a dominant figure in 12% of the stories examined. (To register as a dominant newsmaker, someone must be featured in at least 50% of a story.)

There were signs late in the week that the scandal was beginning to take a toll on Cain’s poll numbers after two weeks of extensive coverage of the allegations against him.

The week’s second biggest story, at 17%, involved perennial college football power Penn State and charges that one of its former coaches, Jerry Sandusky, sexually abused young boys over a 15-year period. The scandal quickly metastasized, with perjury charges filed against two Penn State officials, the firing of the university president, and most notably, the firing of legendary head football coach Joe Paterno. For the week, Paterno, ranked behind only Cain as a newsmaker, featured prominently in 8% of the stories.

Put in perspective, the Penn State story generated more coverage than any other sports-related scandal since PEJ began tracking news coverage in January 2007. The second biggest story in that category (at 13%) was the September 2007 arrest of former football star O.J. Simpson on charges related to kidnapping and assault with a deadly weapon.

The No. 3 story, at 11%, was the economic crisis in Europe, which last week became an even bigger political crisis as Greece worked to form a new government and Italian Prime Minister Silvio Berlusconi announced his resignation after the country’s Parliament agreed to approve economic austerity measures.

Coverage of the debt drama in Europe exceeded that of the U.S. economy last week, which at 8% represented the lowest level of attention to the subject since late August. Coverage was divided along a number of storylines last week, including the thus far fruitless deliberations of the deficit supercommittee, which faces a looming Thanksgiving deadline.

The fifth-biggest story, at 7%, featured some notable November 8 election results, including the outcome of a crucial referendum in Ohio, where voters struck down a measure passed last March that sharply limited the collective bargaining rights of public employee unions, and in Mississippi, where citizens voted down an effort to declare a fertilized egg a person.

Last week, the presidential campaign was the stop story in four media sectors—cable and network news, radio news and online. It generated the most coverage on cable news (39% of the airtime studied).

Once again, the coverage was dominated by allegations against Herman Cain, who had risen to be a surprise GOP frontrunner. Much of last week’s coverage was characterized by a “he said, she said” pattern of allegations and denials.

The initial accusations against Cain had come from a woman who declined to be publicly identified, but last week began with the public emergence of another accuser who offered somewhat graphic details of an alleged encounter. “Sharon Bialek of Chicago became the first woman accusing Herman Cain of sexual harassment to go public Monday, describing an alleged incident in Washington in 1997 in which the president contender, then the president of the National Restaurant Association stuck his hand up her skirt and tried to pull her head toward his crotch,” stated a November 7 ABC News report.

One day later, on ABC’s World News Tonight, the headline was Cain’s unequivocal denial of those charges, with the candidate telling the network in an interview that “they are baseless because I reject them…I don’t even know who this lady is.”

The next day, a Fox News Channel story focused on another new accuser, Karen Kraushaar, who filed a complaint against Cain in 1999 “and was one of two women who got financial settlements” after registering a complaint. In response to Cain denying any inappropriate behavior toward her, Kraushaar’s lawyer was quoted as categorizing Cain’s actions as “incidents of sexual harassment.”

Late in the week, there was some evidence to suggest the scandal, and perhaps coverage of it, was having a significant impact on Cain’s political fortunes.

A CBS radio news story on November 11 reported on a new poll showing that while Cain still held a three-point lead over Romney and Gingrich, his support had dropped by seven points since the scandal broke. “His support has really fallen considerably among Republican women who are apparently more concerned about these allegations,” the report noted.  (On November 14, a new CNN poll showed Cain’s poll numbers dropping from 25% in October to 14% in the wake of the allegations.)

The events unfolding around State College, Pennsylvania last week proved to be, first and foremost, a television story, generating the most attention on broadcast network news (24%) and cable news (23%). And events moved very quickly after the November 5 arrest of Sandusky.

A November 7 CNN story reported that the Pennsylvania attorney general “would not rule out…the possibility of additional charges or the discovery of more victims in the case of a former Penn State university football coach accused of sexually abusing boys between 1994 and 2009…Sandusky is accused of abusing eight boys… He was released Saturday [November 5] on $100,000 bail.”

In the media, the focus quickly swung to Paterno, the best known figure on the Penn State campus. On November 8, the New York Times reported that his “tenure as coach of the Penn State football team will soon be over, perhaps within days or weeks…The board of trustees has yet to determine the precise timing of Paterno’s exit, but it is clear that the man who has more victories than any other coach at college football’s top level and who made Penn State a prestigious national brand will not survive to coach another season.” 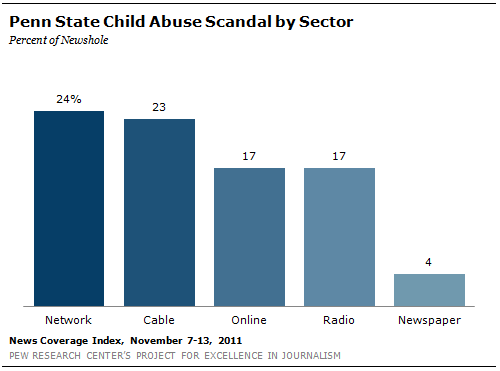 On day later, Paterno was gone, fired by the university’s trustees.

In reporting the news, USA Today declared that “The Penn State sex abuse scandal took a stunning twist Wednesday night when Joe Paterno was told his 46-year tenure as the Nittany Lions head coach is over immediately—going against his plan to finish out the season…The removal of the coaching icon was greeted with tears and gasps among about 300 students watching on television at the student center. Students spilled into the streets, some chanting, "We want Joe back!”

Some of the week’s more dramatic television coverage of the Penn State story was fueled by violent protests that broke out on the campus following Paterno’s firing, with riot police deployed to the scene.

And with many commentators calling it the biggest scandal in history of college sports, the debate over Paterno’s fate became a national issue.

Appearing on the November 10 edition of the O’Reilly Factor on the Fox News Channel, sports columnist Jason Whitlock criticized Paterno for not acting more aggressively after being informed of a 2002 incident of alleged sexual abuse of a minor by Sandusky.

“It’s not good enough to pass it on to your athletic director, who in reality, reports to Joe Paterno,” Whitlock said. He was countered by attorney Steve Greenberg who asserted that “Paterno talked to his superiors about it. He did everything he should do.”

While many analysts are predicting that the scandal could continue to mushroom, it is also possible that last week’s rush of coverage could wane as the case now wends its way through the criminal justice system.

The debt crisis rattling Europe was the No. 1 story in the newspaper sector last week (at 15% of front-page coverage), but it generated the most overall attention in the internationally oriented online sector, filling 19% of the newshole.

Coverage of the U.S. economy was the second leading story in the newspaper sector (12%), but one storyline is receding from the headlines. The Occupy Wall Street protests accounted for only about 1% of the overall news coverage studied by PEJ last week.

The results of key ballot questions in states such as Mississippi and Ohio led some analysts to conclude that Tuesday was a bad night for Tea Party conservatives on issues like unions and abortions, suggesting that voters were signaling an interest in more moderate policies. 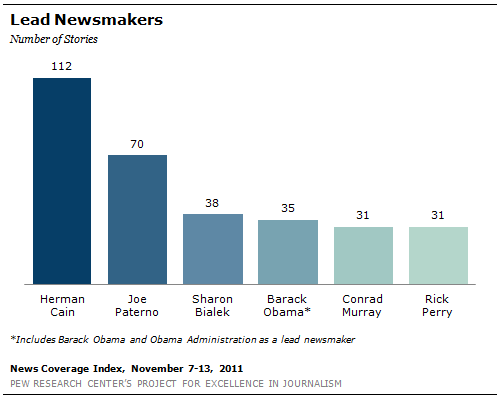 For the second week in a row, Herman Cain was the top newsmaker overall, registering as a dominant figure in 12% of the stories from November 7-13. One of his accusers, Sharon Bialek, was No. 3 at 4% and another, Karen Kraushaar, was further down the list, registering in 1% of the stories.

President Barack Obama, overshadowed by the Cain and Penn State stories last week, slipped to the No. 4 newsmaker slot, registering as a dominant figure in only 4% of the week’s stories. That represented a slight drop from 5% the previous week, when he was the No. 2 newsmaker.

Rounding out the top five list, both at 3%, were Conrad Murray and Rick Perry. Dr. Murray made news when he was convicted of involuntary manslaughter in connection with the June 2009 death of his patient, pop icon Michael Jackson.

Perry, already saddled with some subpar debate performances, made news during a November 9 debate when he could not recall the name of the third governmental department that he said he wanted to eliminate. Part of Perry’s damage control efforts for what became described as his “oops” moment (the word Perry used after his lapse) included a self-effacing stint on David Letterman’s late night talk show.