The sexual harassment allegations lodged against Republican Herman Cain animated social media last week as many bloggers came to the candidate’s defense. While some criticized Cain’s response to the charges, most of the conversation came from conservatives who condemned the press.

For the week of October 31 to November 4, the 2012 campaign and specifically Cain’s scandal was the No. 2 subject on blogs, according to the New Media Index from the Pew Research Center’s Project for Excellence in Journalism.

The subject also received significant coverage in the traditional media last week as multiple women accused Cain of sexually suggestive behavior during the time he was the head of the National Restaurant Association in the 1990s. According to a PEJ special report and campaign update, the tone of Cain’s coverage in the mainstream press was distinctly negative as the allegations surfaced, and Cain received more attention in a single week than any Republican candidate so far in the 2012 race. 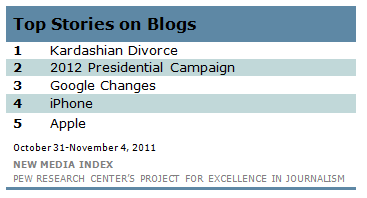 The reaction online was much different than in the news media. Conservative bloggers generally backed Cain. In this way, the online community mirrored public opinion polls, which showed that Cain’s standing in the race had not changed much in the week after news of the scandal broke.

The biggest criticism coming from Cain supporters was that the press was wrong for reporting anonymous accusations, while some blamed other GOP candidates for spreading rumors. A minority of conservatives were critical of how Cain responded. Liberal bloggers, on the other hand, expressed the sense the Cain was getting his due.

The only subject to receive more attention in the blogosphere last week than Cain was the news that celebrity and tabloid star Kim Kardashian had filed for divorce from her basketball playing husband Kris Humphries after only 72 days of marriage. The August 20 wedding was broadcast on E! television and received the highest ratings ever for a program on that channel.

But when word of the divorce hit social media, the fascination with the celebrity couple turned to disgust. Bloggers deplored the media obsession with the couple and wondered if the entire endeavor was a stunt to get more attention. On Twitter, meanwhile, many of the responses were jokes about the length of the marriage.

The October 30 report on the website Politico, which alleged that two women complained to colleagues about inappropriate behavior by Cain during the 1990s, came at a time when his support among Republicans put him near the top of a number of national polls.

Many conservative bloggers immediately dismissed the story by focusing on the timing of the report and the use of anonymous sources.

The blog Scared Monkeys charged that the media had ulterior motives: “The issue is not whether Herman Cain will finally tell all and explain the matter away, it is whether the bias MSM will let the story go as they smell blood in the water and can aid their candidate Barack Obama.”

Others tried to find inconsistencies in the evidence alleged against Cain.

“If there was a real harassment situation, it is very hard to believe that a five-figure payout…would have been sufficient” argued Scott A. Robinson.

Some focused on rumors that the original story was leaked by GOP rival Rick Perry’s campaign. “The latest eruption in the Cain campaign sabotage is the bombshell that Rick Perry was the one who leaked the anonymous sexual harassment charges against Herman Cain,” described Pamela Geller at Atlas Shrugs. “Perry is a snake. Watch him. He is creepy.”

One blogger even speculated on rumors surfacing in the blogosphere that former Obama Chief of Staff Rahm Emanuel, now the mayor of Chicago, had to be involved. “It was a setup from the get-go, with phony ‘witnesses’ recruited well in advance and brought out as soon as Herman Cain pulled ahead in the polls,” alleged 1389 Blog. “And considering the Chicago connection, Rahm Emanuel must have had something to do with it also. That’s bipartisanship, Chicago style.”

A few conservatives, even some who were sympathetic to Cain’s politics, felt he shared the blame for the growth of the scandal because of his poor response.

“The real problem?” asked bbollmann at The Rockin’ Conservative! “No one in Cain’s campaign has enough political prowess to think, ‘This story will come out; we better get in front of it; we better time the release; we better choreograph the response; we can make this work for us.'”

“The fact is that despite Politico’s editorial sleaziness and water carrying for Democrat politicians, they got this story 100% right,” wrote streiff at Red State. “The fact is that Cain had ten…days to prepare for this story and either couldn’t or didn’t…Cain’s sex scandal is a self-inflicted wound from the word ‘go’.”

To liberal bloggers, the scandal not only diminished Cain but it cast a dark light on the Republican Party generally.

“In GOP Bizarro World: Sexual Harassment Makes Herman Cain More Electable,” read the headline of a post by Anomaly100 at Democrats for Progress.

Some liberal bloggers did think the allegations would irreparably harm Cain’s campaign.

“The Republican love affair with presidential candidate Herman Cain is about to end,” forecasted Kimberly at The Black Headband. “Those pesky claims about sexual harassment from not one, not two but now three women are going to be his campaign’s undoing.”

In short, there was little evidence of minds changing among bloggers over the Cain story, but there was a good deal of anger over it anyway.

Another very different kind of scandal also unfolded at the beginning of last week. The story, as reported on the website TMZ, that Kim Kardashian was going to divorce Kris Humphries after 72 days of marriage spread rapidly through social media.

And on both blogs and Twitter, a letter on Kardashian’s own website directed to her fans was popular.

“I’m sorry if I have hurt anyone, but my dad always told me to follow my heart and I believe now that I really am,” the television personality and reality show star wrote.

Some expressed disgust at the amount of attention the celebrity marriage and divorce was receiving, which only gave it more attention. “This obsession with Kim Kardashian is just a microcosm of a much bigger issue that we have in this country,” asserted The Savy Sista. “Everything is so celebrity driven. The majority of people can’t tell you who their congressional representative is, but I bet you they can tell you what kind of dress Kim was wearing when she got married.”

“I would like to see a total ban on reporting ‘lifestyle’ stories about celebrities,” suggested Steph/Ven at Where are the Frogs. “We should starve them of the publicity they need, so they are forced to either develop actual talent or, more likely, just go away.”

Others wondered whether the marriage was real or just a ploy to receive more attention for reality TV shows.

“Apparently when you file for divorce after a 72-day marriage and a wedding with a rumoured price tag of $10 million, you want the world to know immediately,” observed Allison at Much Music. “Once thing is for sure – this divorce means that it won’t be long before we see another Kim K. reality show.”

On Twitter, more than anything, users of social media had fun joking about the news. Many shared their own punch lines about the length of the marriage using the hashtag #ThingsLongerThanKimsMarriage.

“The line at the post office w/1 person behind the counter,” offered A Damali in comparison.

The rest of the major subjects on blogs last week were tech-related.

The third subject on blogs involved changes to Google’s products gmail and Google Reader. The company’s blog announced that Google Reader would be redesigned to integrate functions of Google+ and the look of gmail would change to streamline conversations. A number of commentors, including the former project manager of Google Reader Brian Shih, were critical of the redesigns.

The same topics about Google were the fourth-largest subject on Twitter as well.

The fourth and fifth subjects on blogs, however, both involved Apple.

Fourth were stories about Apple’s newest iPhone 4S which was the subject of significant anticipation before it was released a month ago. Most of the attention last week was to problems iPhone users were having with their batteries caused by a bug with the phone’s operating system.

Fifth were stories about larger changes to the Apple company. In particular, bloggers linked to a report about Apple’s purchase of various 3D mapping companies in order to create software that will compete with, or even surpass, the usefulness of Google maps. Others highlighted a New York Times blog post about ways that Apple could revolutionize television viewing. 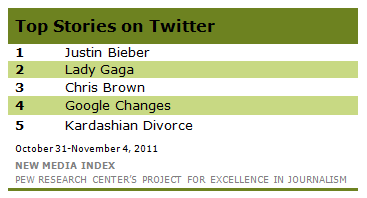 On Twitter, the week was led by news about celebrities and pop singers.

Justin Bieber, a frequent topic of conversation of Twitter, was the top subject as users linked to his new Christmas album and a video of him in the studio talking with other singers Usher and Pharrell about the record.

Lady Gaga was second with most of the attention directed to the website of her new foundation called Born This Way which aims to empower youth and address the issue of bullying.

Various pictures of singer Chris Brown in costumes made up the third biggest subject, followed by stories about Google at No. 4, and the Kardashian divorce at No. 5.

An advocacy video aimed at preserving freedom on the Internet was the leading clip in YouTube’s “news” category last week.

Produced by La Quadrature du Net, a European advocacy group promoting the rights of citizens on the Internet, the No.1 video decried the Anti-Counterfeiting Trade Agreement known as ACTA, which was signed by eight countries including the United States, on October 1st in Japan, and the lack of transparency throughout the negotiating process.

The group argued that this intellectual property enforcement treaty, allowing Internet Service Providers to monitor and censor online communications, would be a major threat to freedom of expression. The scope of ACTA would include counterfeit goods, generic medicines and digital copyright infringement. With the European Parliament’s upcoming vote on ACTA, La Quadrature urged people to demand their representatives to reject the treaty.