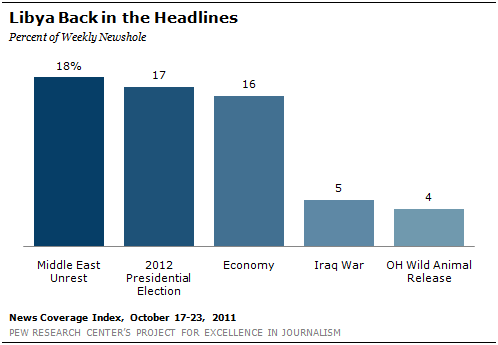 In what looked like another week in which the news media would be focused above all on the 2012 election, the narrative abruptly shifted to Libya when images of the bloodied dictator appeared online and on television early Thursday. Overall attention to turmoil in the Middle East, almost all of which was about Libya, accounted for 18% of the newshole during the week of October 17-23, according to the Pew Research Center’s Project for Excellence in Journalism.

It was the first time in nearly two months that the region got so much attention, according to PEJ’s weekly News Coverage Index (during the week of August 22-28, the end of Gaddafi’s grip on power drove the subject to 26% of the newshole studied).

The chaotic nature of the scene and graphic nature of the photos of Gaddafi’s demise at the hands of Libyan rebels both tested the media’s traditional desire to play the role of gatekeeper. Major news organizations were reluctant to confirm that Gaddafi was dead for several hours after Libyan sources on the ground claimed he was. Outlets were also cautious about sharing shaky video and stills of Gaddafi at the mercy of the mob, even if the violent content was widely available to any who wished to see it on the web.

The race for president followed close behind in the news agenda. Much of that coverage was driven by another Republican candidates’ debate, this time in Las Vegas. For the week, the 2012 presidential campaign filled 17% of the newshole studied. Campaign coverage was especially prominent on cable TV, where it accounted for 31% of the airtime studied, enough to make it the No. 1 topic. Much of the debate and overall campaign coverage focused on three leading candidates—Mitt Romney, Herman Cain and Rick Perry. Romney was the top newsmaker in campaign stories, though, a dominant newsmaker in 31% of stories studied. (To register as a dominant newsmaker, someone must be featured in at least 50% of a story.)

The No. 3 story last week, the U.S. economy, was led by reporting on Barack Obama’s jobs bill and the Occupy Wall Street protests. Together, those two subjects made up about half of the 16% of the newshole focused on the economy. After peaking at 10% of the overall newshole two weeks ago, attention to the protests dropped last week, accounting for 4% of the overall newshole.

The conflict in Iraq also returned to the news. That nation drew more attention than it had in over a year after President Obama announced that all U.S. troops would be coming home from the country before the end of 2011. In all, Iraq was the No. 4 story of the week, at 5% of the newshole. The last time Iraq appeared as prominently in the news was the week of August 30-September 5, 2010, when Obama announced the end of the U.S. combat mission there (it accounted for 8% of the newshole that week).

Finally, at No. 5, was the story out of Zanesville, Ohio, of the exotic animal collector who released dozens of lions, tigers, bears and other creatures into the wild and then committed suicide. The story accounted for 4% of the newshole studied. Forty-nine animals were euthanized by authorities in an attempt to contain the situation.

The Death of Gaddafi 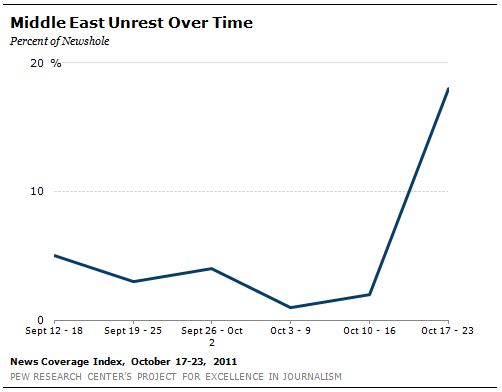 In the hours after news broke that former Libyan leader Col. Muammar Gaddafi might have been captured and killed, American news organizations reported the news with caution.

Details were still sketchy on Thursday morning, October 20. NATO forces had fired on a convoy containing Gaddafi as he tried to escape his hometown of Sirte, which had been under siege by rebels. Gaddafi escaped, and hid in a sewage drain. He was removed from the drain alive, but died on his way to the hospital, possibly from a gunshot wound to the head.

That afternoon, a CNN anchor described one of the many grainy, unsteady videos taken at the scene. The video “appears to show—look carefully—it appears to show Gaddafi in custody. He appears in this image, there, still alive. I know it’s jumpy, it’s hard to follow, but we do see a man, purportedly Muammar Gaddafi in a semi-upright position up against that truck, clearly under duress.”

Later in the day, other news outlets would broadcast those same images, typically prefacing with a warning to viewers.

“For more than four decades he ruled Libya with flamboyance and fear. But tonight, after months on the run, Muammar Gaddafi is dead,” said George Stephanopoulos in an opening segment on Thursday’s ABC World News Tonight. “We should warn you, this video is gruesome,” he said before showing the evidence.

“The pictures showing his last moments alive—fair warning—are disturbing. There are also graphic pictures showing him after death,” said NBC’s Brian Williams, also on Thursday, over a widely circulated video clip of a wounded Gaddafi in the hands of his captors.

By the next day, news outlets were fully on to the task of digesting the implications of Gaddafi’s death for the people of Libya. A USA Today story from October 21 contained the headline “Gadhafi era ends: What’s next for Libya?” The article said that “Libya and its long-suffering tribal society, sitting atop vast oil riches, faces an uncertain future as it tries to establish a real government in place of the dead leader’s personal tyranny.”

By Sunday, some outlets had pieced together the details of Gaddafi’s final days in squalor. “After 42 years of absolute power in Libya, Col. Muammar el-Qaddafi spent his last days hovering between defiance and delusion, surviving on rice and pasta his guards scrounged from the emptied civilian houses he moved between every few days,” reported The New York Times on October 23.

The 2012 presidential campaign, the No. 2 story last week, centered on the leading Republican candidates facing off in an October 18 debate in Las Vegas.

Of particular focus was Herman Cain, the former also-ran turned front-runner in some polls. Cain is undergoing a new moment of scrutiny.

Some of that scrutiny last week was purely political—whether he will sustain his surge. An Associated Press article from the 18th questioned whether he could sustain his recent bump in popularity and interest by the press. “Herman Cain has risen fast. Now the question is: Will he fall?”

“Herman Cain needs to prove that he is serious, and exactly where he stands on these issues,” said MSNBC daytime host Tamron Hall on October 18 after touching on the debate set off by Cain’s “999” tax code plan and his controversial statements about a U.S.-Mexico electrified border fence.

For all the pre-debate attention on Cain, much of the post-debate coverage focused on the sparks flying between former Massachusetts Governor Romney and Texas Governor Perry.

“Tensions run high between Mitt Romney and Rick Perry at Las Vegas Debate,” read an ABC News web headline from October 18. “In the midst of a particularly volatile period in the primary cycle, the candidates threw some of their sharpest elbows yet.”

The Washington Post suggested that the tensions on stage between Romney and Perry were the result of a larger issue at play in the Republican Party. “The normally orderly process by which Republicans select a presidential contender has this year turned into a frenzied and fickle courtship that has seen opinion polls swinging from one infatuation to the next.” 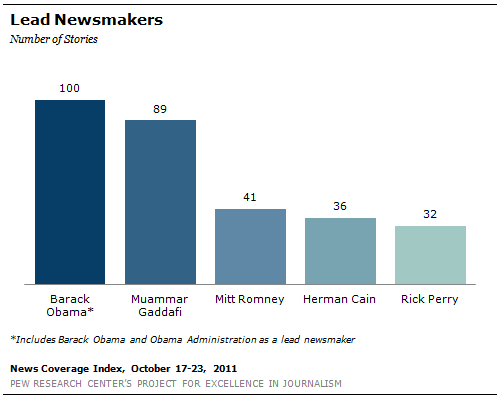 Barack Obama was the top newsmaker last week, featuring prominently in a number of major stories (he spent the week lobbying for action on his jobs bill; he was the subject of a number of campaign stories; he gave a public speech following confirmation of the death of Muammar Gaddafi; and he ordered the exit of U.S. troops from Iraq). Obama was the lead newsmaker in 11% of stories studied, up from 7% the week before.

The next three lead newsmakers were each prominent figures in coverage of the GOP race for president. At No. 3 was Mitt Romney at 5%; at No. 4 was Herman Cain at 4%; and at No. 5 was Rick Perry, also at 4%. It was the second week in a row that Cain led Perry in media exposure.