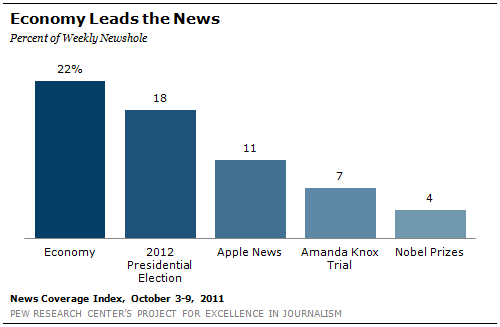 The economy reclaimed its perch at the top of the news agenda as the No. 1 story last week, largely driven by dramatically increasing media attention to the Occupy Wall Street demonstrations.

Overall economic coverage accounted for 22% of the newshole from October 3-9, up from 14% the week before (when it was No. 2), according to the Pew Research Center’s Project for Excellence in Journalism. The protests largely aimed at Wall Street constituted the largest single thread in that coverage, making up about one-third of the economic storyline. That amounted to roughly 7% of the overall newshole, or nearly four times the amount of protest coverage from the week before.

Last week was also the biggest yet for 2012 campaign coverage, at 18% of the newshole. That subject generated the most attention on cable TV, accounting for 34% of the airtime studied.  For the past month, the campaign, at 14% of the newshole, has been the No. 2 story behind the economy—suggesting the media have entered a new phase of the election cycle in which the presidential race is a weekly priority.

Much of the coverage last week hung on the buildup to a big announcement by New Jersey Governor Chris Christie, who—despite a growing clamor for his candidacy—announced on October 4 that he would not run. Former Alaska Gov. Sarah Palin also announced last week that she would not run for president. But the timing of that announcement—the same evening the world learned of Apple CEO Steve Jobs’ death—may have tamped down media attention to her.

Among the other top stories last week was the October 5 death of Jobs, a man who for years had struggled publicly with pancreatic cancer. The next morning, Jobs’ image was emblazoned on major newspapers from The New York Times to The Wall Street Journal.  Fueled largely by his death, news involving Apple—which included the release of the latest iPhone version—was the No. 3 story, at 11% of the newshole.

At No. 4 last week was the dramatic acquittal of an American woman, Amanda Knox, in an Italian court on murder charges. The story was No. 1 on network television at 14% of the airtime studied, and accounted for 7% of the overall coverage.

News about the winners of this year’s Nobel Peace Prize represented the No. 5 story last week, at 4% of the newshole. Among the winners featured in news reports were three women from Libya and Liberia who have advocated peace and women’s rights in war zones.

Media attention to the Occupy Wall Street protests has increased as the protests have gained momentum.

On September 17, demonstrators first set up camp in Zuccotti Park in lower Manhattan, positioning themselves in the city’s financial district. The leaderless group of activists, standing against “corporate greed and social inequality,” generated negligible media coverage during that first week. 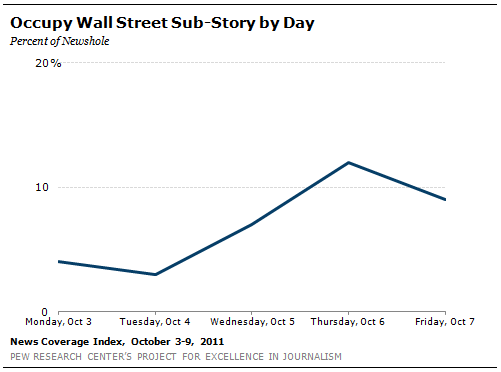 But as the protests grew in size and intensity, as on September 24 when many marched toward Union Square, the press began to take more notice. On October 1, more than 700 demonstrators were arrested as they marched across Brooklyn Bridge. During the week of September 26-October 2, the protests got a little more media traction, accounting for 2% of the overall newshole.

Last week, similar protests emerged in major cities around the country, including Los Angeles, Chicago, Boston and elsewhere. It was at this point that coverage began to spike, with the volume of coverage increasing each day. On Monday, October 3, the protests amounted to 4% of the newshole, and by Thursday, October 6, they accounted for 12%. By this time, labor unions and Hollywood celebrities had joined forces with the crowds.

Early in the week, media outlets were still trying to grasp what the protests were about. ABC’s Dan Harris took a tour of the temporary village set up at the heart of the protests in New York, pointing out an information booth, a media center, and food stands with free, donated goods. “The one thing they don’t have—a clear focus,” he said during a World News Tonight segment on October 3.

The Washington Post on October 4 described the protesters as “having no single leader and no organized agenda.”

Among cable and radio talk programs, where attention to the demonstrations was heavy, the tone of analysis depended on the politics of the outlet or host.

Conservatives jeered the Occupy Wall Street protesters. Bill O’Reilly during his October 3 program described their agenda in his own words: “This is ‘I hate capitalism, I want this socialist nirvana, and I’m going to disrupt everybody’s life to make my point.’ That’s wrong.”

Liberal MSNBC host Ed Schultz defended the protestors in a live broadcast from Wall Street on October 5. “This just might be the movement that starts a major change in this country,” he said.

Campaign: Christie Bows Out Before He Was Ever In

Last week, presidential campaign coverage focused on a handful of developments, including Chris Christie’s and Sarah Palin’s decisions not to run, the problems afflicting Rick Perry’s campaign, and Herman Cain’s moment in the spotlight.

Christie’s October 4 press conference from the New Jersey State House in Trenton was the culmination of weeks of anticipation, and was carried live on all the major cable news channels. It was, in the words of a Wall Street Journal story, a decision that “will dash the hopes of the many donors, operatives and leading figures in the Republican Party who have clamored for him to run.” Christie stated his wishes to finish his work in New Jersey as a major reason for his decision.

Meanwhile, Texas Governor Rick Perry found himself on the defensive after an October 2 Washington Post story reported that a hunting camp he had once leased had a racial slur painted on a rock. It was the latest in a series of setbacks for the Perry campaign. According to CBS political analyst John Dickerson the following day, “If the Perry campaign was running along smoothly and always going well, this might’ve been the kind of thing he could weather. But he’s been having a very rough spot dealing with a number of difficult troubled issues.”

Christie and Perry were the leading figures in campaign coverage last week, each registering as a dominant newsmaker in about one-fifth of all the election stories. (To be considered a dominant newsmaker, a person must be featured in at least 50% of a story.)

One candidate enjoying a boost in the polls and some positive coverage in the news media was Herman Cain. An Oct. 6 New York Times profile suggested that “this could be Mr. Cain’s moment. With Gov. Chris Christie of New Jersey taking a pass and Gov. Rick Perry of Texas struggling, the yearning for a candidate who can combine fiery conservative populism with concrete policy proposals has led a growing section of Republican voters to embrace, or at least take a hard look at, Mr. Cain.”

Apple CEO Steve Jobs’ death at age 56 elicited wall-to-wall news coverage on Thursday and Friday last week, including lengthy obituaries chronicling his impact on the world of technology and consumer behavior. And fittingly, his death generated the most attention, 21% of the newshole, in the online news sector.

A 2005 Stanford commencement address by Jobs in which he meditated on mortality circulated online and on television. Mostly, the “visionary in the black turtleneck,” as an October 5 CNN story put it, was revered in the press for his looming influence and his big ideas. But some reports described his intensity and his demanding nature.

After four years in prison, Amanda Knox was acquitted of murder charges in Italy last week. The onetime American student living abroad in Italy had been convicted and imprisoned on charges of participating in the murder of her roommate. American television networks, especially broadcast, covered the acquittal news, and played and replayed Knox’s emotional speech thanking her family and supporters in the United States. The subject generated its second highest level of coverage (10%) on cable news.

Finally, the Nobel Peace Prize awardees accounted for the No. 5 story last week, generating the most attention in the online and broadcast news sectors (7%). A number of news reports paid special attention to three women who shared the prize for their work on women’s rights:  Ellen Johnson-Sirleaf and Leymah Gbowee of Liberia and Tawakul Karman of Yemen.

From October 3-9, Barack Obama topped the list of newsmakers, appearing prominently in 7% of stories studied last week, the same as the week before.

At No. 2 was Amanda Knox, the 24-year-old American acquitted of murder charges in Italy at 6%. The No. 3 newsmaker last week was Steve Jobs, at 5%.

The No. 4 and No. 5 top newsmakers last week were two key Republican presidential figures, both at 3%. One of them, Chris Christie, announced that he would not enter the race. The other, Rick Perry, was the subject of more controversial stories last week as the press continued to vet the Texas governor and then chronicle his campaign’s stumbles.