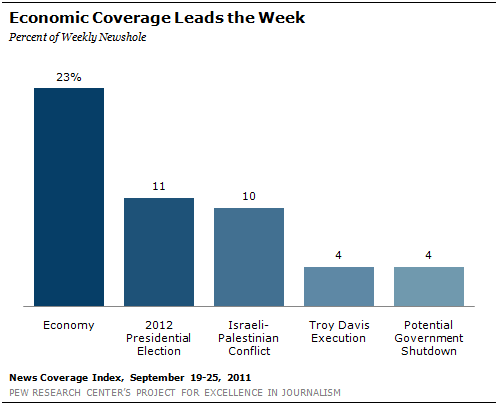 From September 19-25, the economy accounted for 23% of the newshole, up modestly from 20% the previous week, according to the Pew Research Center’s Project for Excellence in Journalism. And half of that economic coverage focused on the jobs and taxes debate set in motion by Obama’s September 8 speech introducing a $447 billion dollar job-creation package.

Last week, the major newsmaking event was the president’s September 19 speech on deficit reduction in which he called for some tax increases targeted at the wealthy. That triggered a fierce ideological battle in which Obama talked about the rich paying their “fair share” while opponents branded the proposal “class warfare.”

A related budget story, and one characterized in the press as another example of Washington’s political dysfunction, was the No. 5 subject, at 4% of the newshole. That is the threat of a looming government shutdown, largely because of a dispute over how to fund the Federal Emergency Management Agency (FEMA).

The No. 2 story last week was the presidential campaign (11%). There was a significant change in the GOP storyline. After weeks of basking in his lofty poll numbers, Texas Governor Rick Perry found himself on the receiving end of coverage questioning his political viability in the wake of a widely panned performance at the September 22 Republican debate.

The No. 4 story (4%) was the September 21 execution of Troy Davis, the man convicted of the 1989 murder of a Georgia police officer. The case was controversial, with some witnesses recanting parts of their earlier testimony while Davis and his supporters maintained his innocence.  In the media, the case also reopened a debate over the death penalty.

A Battle over Taxes

The U.S. economy was the top story in all five media sectors last week, generating the most attention (28% of the newshole) on newspaper front pages. And it was a week defined by Obama’s deficit reduction plan, which was interpreted by some as signaling a new political strategy by the president.

“President Obama struck a combative tone on Monday as he called for $1.5 trillion in new tax revenue as part of a proposal to tame the nation’s rocketing federal debt, drawing a sharp contrast with the Republican vision and resetting the terms of the economic debate in Washington this fall,” declared a September 19 Washington Post piece. “Combined with his call this month for $450 billion in new stimulus, the proposal represents a more populist approach to confronting the nation’s economic travails than the compromises he advocated earlier this summer.”

What followed for most of the week in the media narrative was partisan wrangling, perhaps foreshadowing a debate about taxing the wealthy that will become a defining issue in the 2012 presidential campaign.

Democratic Senator Charles Schumer responded by stating that the Republicans “refusal to address the proposal on the merits is revealing. They know they will lose any argument about the policy itself.”

And on the airways, the pundits picked sides.

On his September 21 MSNBC show, liberal commentator Ed Schultz said Obama has the country on his side on the tax issue: “According to a new Gallup poll, 66 percent of Americans are in favor of increasing income taxes on people earning over $200,000 a year and families earning at least $250,000. Only 32 percent are opposed. The president has Republicans, I think, right where he wants them, if you want to talk about the campaign trail.”

That same night on the Fox News Channel, conservative host Bill O’Reilly countered that, “I’m not going to endorse a huge tax increase on anybody until the spending madness stops. Until the feds and the states demand efficiency and cut the crap, I will oppose targeted tax increases."

Whether his tax proposal was being applauded or panned, President Obama was the major headline maker on the subject last week, showing up as a prominent figure in nearly 40% of all the stories about the U.S. economy studied by PEJ. (To register as a prominent figure, one must be featured in at least 50% of that story.) 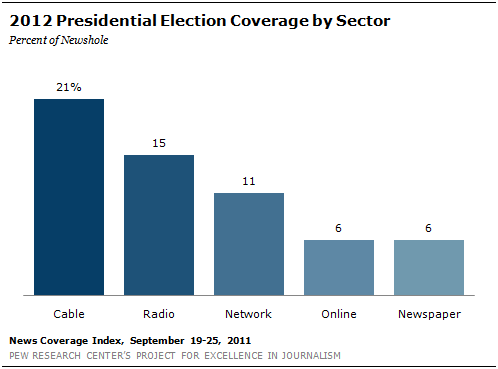 verage of the presidential campaign filled 11% of the newshole last week, down slightly from the week before (12%). And on the ideologically oriented cable and radio talk shows, the topic accounted for more than one-third (35%) of the airtime studied.

As he has in every week since his mid-August entry into the race, Texas Governor Rick Perry registered as the top newsmaker among the Republican hopefuls last week. But this time his debate performance, which included a few notable stumbles, triggered a burst of negative commentary.

On the September 23 edition of PBS NewsHour, senior correspondent Judy Woodruff summed it up this way. “Whether it’s folks who like the other candidates and were inclined not to like Rick Perry’s performance anyway, or people who were supporting Rick Perry, they acknowledge it wasn’t a good night for him.”

The same night on CNN, conservative analyst Dana Loesch echoed the view that Perry had delivered “a pretty bad performance last night…So I don’t know if it’s just the pressure of the debate format or the intense weight of the national scrutiny that’s getting to him. But I mean it’s not just his speech skills. It was his physical body language as well. He looked very uncomfortable.”

By week’s end some pundits were questioning whether Perry, who had quickly zoomed to the top of the GOP presidential polls, would lose his frontrunner status.

The drama at the United Nations, with the Palestinians seeking membership status, drove coverage of their dispute with Israeli to 10% of the newshole last week. For much of the week, the U.S. tried to convince the Palestinians to drop their bid, but when that failed, some of the coverage focused on the prospect for reduced U.S. influence in the region.

The situation “at the United Nations underscored a stark new reality: the United States is facing the prospect of having to share, or even cede, its decades-long role as the architect of Middle East peacemaking,” stated a September 22 New York Times story.

The controversy over the Troy Davis execution was the fourth biggest story in the news last week (4%), with Rhonda Cook of the Atlanta Journal-Constitution — who has been a media witness at 13 executions — setting the scene.

“There was worldwide interest, unlike any other I’ve witnessed,” she wrote. “The number of media outlets and protesters at the prison for Wednesday’s lethal injection was astounding. Chants came from death penalty opponents cordoned off in the staging area. And there were many more state troopers, Butts County deputies and prison guards armed and in riot gear.”

The threat of a government shutdown over funding issues (No. 5, at 4%) offered another partisan narrative pitting the Republican controlled House and against a Senate run by Democrats. An Associated Press story captured some of the weary sense of déjà vu that was present in the media coverage by reporting that “the parties’ latest showdown over spending” helps highlight “the raw partisan rift that has festered all year.” 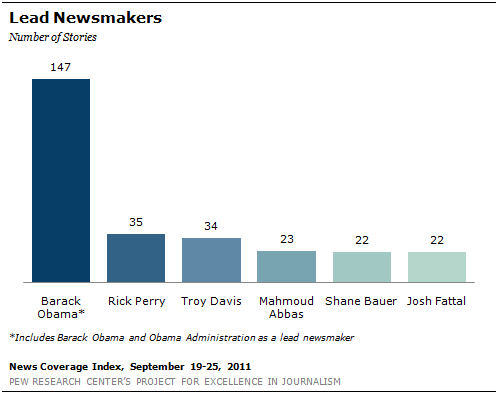 Troy Davis, the convict put to death in Georgia last week, was close behind at No. 3, also at 4%. Palestinian President Mahmoud Abbas, who took his case to the UN last week, was the fourth leading newsmaker, at 3%.

And the two Americans freed from an Iranian prison—Shane Bauer and Josh Fattal—were next, tied as lead newsmakers in 2% of the week’s stories.