Steve Jobs’ announced resignation resonated throughout Twitter last week, making it by far the biggest news story shared on the site. Responses were generally admiring of Apple’s CEO and co-founder with remembered quotes from Jobs and expressions of concern for his health. There also though, many cracked jokes about the change in power with Apple lingo as the punch-line. 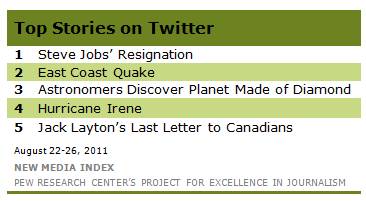 For the week of August 22-26, Steve Jobs’ resignation was the most-discussed subject on Twitter according to the New Media Index from the Pew Research Center’s Project for Excellence in Journalism. The subject so dominated Twitter, that on August 25, the day after he announced his departure, all but one of the links appearing on the top story lists was about the CEO.

Two other stories that did make it on the list of the most linked-to news Twitter for the week were natural disasters that struck the East Coast.

In addition to PEJ’s ongoing (and recently updated) weekly analysis of the most-discussed stories in social media, the examination of Twitter this week utilizes computer technology from the media monitoring firm Crimson Hexagon to examine the key components of the conversation following Jobs’ resignation.

Health problems seem to be at the heart of the CEO’s decision to leave his post. After being diagnosed with pancreatic cancer, Jobs underwent a liver transplant and has been on medical leave for an undisclosed condition since January. In his letter of resignation, widely posted on blogs, Jobs wrote, “I have always said if there ever came a day when I could no longer meet my duties and expectations as Apple’s CEO, I would be the first to let you know. Unfortunately, that day has come.” He goes on to explain that he would like to serve as Chairman of the Board and recommends COO Tim Cook as his replacement-recommendations quickly carried out.

The response on Twitter was huge. Across the millions of twitter feeds followed with the Crimson Hexagon tool, there were more than 50,000 posts in the three days following the announcement.

First and foremost, Twitter users passed the news along. Fully 29% of the conversation about Jobs was sharing the news with others, often as retweets of articles from blogs and news sites like Gizmodo, MacRumors, CNN Money, Los Angeles Times, as well as other sources.

The second most common theme among Twitter posts added a light-hearted tone to the news. Jokes, often using puns of Apple products or Jobs’ name, accounted for 17% of the conversation.

The third most common subject about Jobs, at 11%, focused on the company’s finances, specifically how Apple’s stock price responded to Jobs’ announcement. 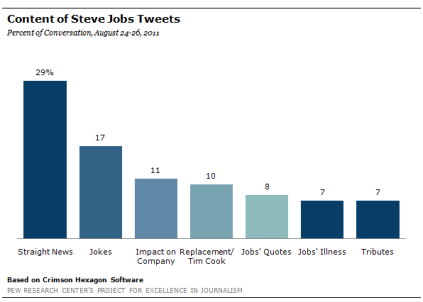 The remaining three areas of conversation were full of admiration for the CEO, from sharing remembered quotes (8%) to concerns for his health (7%), and general tributes, Twitter users expressed their high regard for the Apple co-founder.

The most popular jokes on Twitter were plays on words comparing Jobs’ resignation to Apple products.

“Steve Jobs texted his employees that he would be quitting his job but bc of auto-correct they thought he was just he was quilting with rob,”* tweeted Blake Griffin, a basketball player for the Los Angeles Clippers.

“Steve Jobs resigned as CEO as Apple. I really hope he gave his notice with a note that just said ‘iquit,'” wrote the popular Twitter user @Lord_Voldemort7, who writes as the Lord Voldemort character from the Harry Potter series.

Other posts, like those from Junkboy, Chris D’Elia and Karl Chandler, made jokes based on his name.

Much of the Twitter discussion of Jobs was laudatory, with 8% sharing quotations from him, 7% writing tributes and another 7% sympathizing with his illness.

Many of the quotes shared referenced life, hard work and leadership.

“No one wants to die. Even people who want to go to heaven, don’t want to die to get there. – Steve Jobs,” wrote Lifesfaircom.

“Be a yardstick of quality. Some people arent used to an environment where #excellence is expected.~Steve Jobs,” wrote Deb Spiecer.

Additionally, The Wall Street Journal put together a list of Jobs’ quotes, which was often retweeted.

In discussing his health, those on Twitter were generally concerned for Jobs’ welfare and wished him well.

“Steve Jobs resigning as CEO of Apple and I just hope that he stays healthy. We need to keep as many innovators like him on this earth,” tweeted the actor Harry Shum, Jr.

“It’s so sad about Steve Jobs and I bet he would trade his billions for good health! Be THANKFUL for what you got!” wrote bevysmith.

“If Steve Jobs beats this cancer thing again this man needs to run for president of the US. I’d vote for him,” said Jessica Stone.

Among the other top stories on Twitter were two natural disasters on the East Coast.

The 5.8 magnitude earthquake with an epicenter in Mineral, Virginia was the No. 2 story for the week. People on Twitter were excited by the rare geological event, sharing news articles about the quake and pictures of the effects-mostly photos of small objects that fell down during the quake.

The other natural disaster, Hurricane Irene, which had the potential to cause extensive damage all along the East Coast, was the fourth most popular story on Twitter for the week.

In third place was a story about astronomers discovering a planet made of diamond. The planet is far denser than any other known planet and since it is mostly made of carbon, a large part of it is effectively diamond.

Wrapping up the top stories was a letter written by a Member of Canadian Parliament, Jack Layton, shortly before his death on August 22. Layton suffered from an undisclosed type of cancer and wrote the letter to address a number of topics and to say goodbye to Canadians.

The most-viewed news video on YouTube last week was an exhibition basketball game that ended in a melee.

The August 18 incident occurred on the second day of Vice President Biden’s trip to Beijing during what was billed as the “China-U.S. Basketball Friendship Match” between the Georgetown University Hoyas and the Chinese professional team, the Bayi Rockets.

The amateur footage showed players from both teams exchanging blows, tackling one another, and chairs being thrown, but it was unclear who started the brawl. At one point, a Chinese player could be seen repeatedly punching one of the Georgetown players. As Hoyas coach John Thompson III and the players headed to the locker room, the team had to dodge plastic water bottles hurled at them by the crowd.

The Week’s News on Blogs

The national debt was the most popular subject on blogs last week. Technology stories also drew a lot of attention.

Articles about the national debt increasing $4 trillion during Obama’s presidency had bloggers abuzz. One piece noted 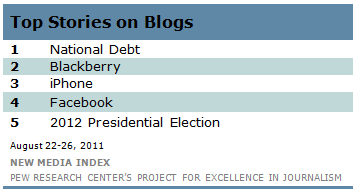 that the national debt was growing about $3 million a minute, even during Obama’s vacation. Much of the response came from conservative blogs, critical of the president’s handling of the economy.

“In half the time Obama will have overwhelmingly outspent Bush’s entire eight years and he is on a straight, narrow path to earn new lows of disapproval in less than half the time it took his well-known scapegoat to achieve such levels of detest,” wrote Running Against Obama.*

“Even Paris Hilton can’t spend money that fast!” wrote The Good Fight, “All joking aside, the rate of spending under this administration is mind boggling and certainly cannot be sustained.”

“Obama is saying yes, we can get control of the national debt,” wrote Now the End Begins, “But ominously every time he says that he adds that trillions of dollars in infrastructure repairs are badly needed across the country.” Competing smart phone technology ranked second and third. Blackberry took second place, with bloggers linking to a review of the new Blackberry Bold 9900 and a Blackberry blog post about a new music app for the device.

Upcoming iPhone 5 features followed close behind at No. 3. One article discussed a new option for Japanese iPhone users, an early earthquake warning notification system, available with the iOS 5 operating system. Another piece examined new parts for the iPhone 5, comparing them with iPhone 4 parts.

New features on Facebook were the fourth most popular story for the week. The updates included tools that allow users to share content with only a select group of individuals.

The fifth topic was the 2012 presidential elections. Bloggers shared news about two GOP candidates: A story about Mitt Romney nearly quadrupling the size of his beach home and a collection of quotes from Jon Huntsman’s appearance on an ABC political talk show, where the presidential aspirant reacts to other GOP candidates.

To see the new methodology for how PEJ arrives at the list of most-discussed stories in social media, click here.

This special edition of PEJ’s New Media Index utilizes computer technology from the media monitoring firm Crimson Hexagon. Based on an examination of almost 30,000 Tweets, this report goes beyond the normal methodology of PEJ’s index to look at the specific themes and tone of conversation related to the Steve Jobs’ resignation.

Crimson Hexagon is a software platform that identifies statistical patterns in words used in online texts. Researchers enter key terms using Boolean search logic so the software can identify relevant material to analyze. PEJ draws its analysis samples from hundreds of millions of publicly available Twitter posts. Then a researcher trains the software to classify documents using examples from those collected posts. Finally, the software classifies the rest of the online content according to the patterns derived during the training.

According to Crimson Hexagon: “Our technology analyzes the entire social internet (blog posts, forum messages, Tweets, etc.) by identifying statistical patterns in the words used to express opinions on different topics.” Information on the tool itself can be found at http://www.crimsonhexagon.com/ and the in-depth methodologies can be found here http://www.crimsonhexagon.com/products/whitepapers/.

The timeframe for the analysis is August 24-26, 2011, which is different than the normal NMI week, Monday through Friday.

PEJ used the following list of keywords in a Boolean search to narrow the universe to relevant posts:

*For the sake of authenticity, PEJ has a policy of not correcting misspellings or grammatical errors that appear in direct quotes from blog and Twitter postings.