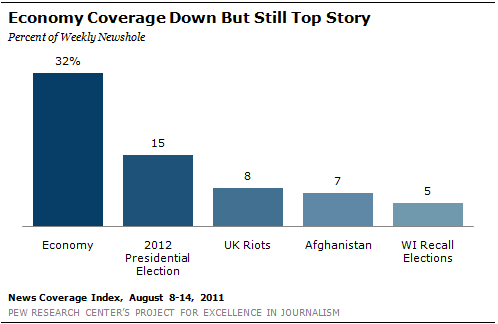 rollercoaster week for the stock market replaced the debt ceiling deal as the driving force in economic coverage last week. And a Republican debate in Iowa helped propel the 2012 presidential contest to its biggest week of coverage so far.

From August 8-14, the economy was the top story at 32% of the newshole, according to the Pew Research Center’s Project for Excellence in Journalism, marking its eighth week in a row as the No. 1 subject. It was the second consecutive week, however, in which economic coverage had dropped—down from 45% the previous week and 52% the week before that.

The week that many in the media called the most dramatic since the economic crash of 2008 had news organizations scrambling to cover and make sense of the gyrations of a stock market that plunged 634 points one day and jumped 430 the next day. But lingering reactions to the federal government’s debt compromise and the downgrade of the U.S. credit rating also made headlines.

The August 11 Republican presidential faceoff in Iowa—two days ahead of the GOP straw poll there—helped drive coverage of the 2012 election (the No. 2 story last week) to 15% of the newshole. That marked the biggest week for coverage of the campaign—a subject the media had devoted relatively little attention to in recent weeks. Indeed, in the five weeks between July 4 and August 7, the campaign had accounted for only 3% of the newshole.

The No. 5 story was another political saga with potential implications for 2012. Coverage of the Wisconsin State Senate recall elections accounted for 5% of news coverage last week. The mixed results—in which Democrats won two seats from Republicans, but the GOP held on to its Senate majority—were seen by the media as a barometer of the political climate in that crucial state.

The No. 3 story last week, the UK riots that were sparked by a police shooting, filled television screens with arresting images of looting and fires in London. The story, at 8% of the newshole, drove home the impact of economic strains and stresses in other parts of the world.

Also among the top stories last week (No. 4 at 7%) was the war in Afghanistan. The coverage focused on the shooting down of a military helicopter that killed 30 Americans, most of whom were Navy SEALs. It was the biggest single loss for U.S. forces since that conflict began in 2001.

A Wild Week on Wall Street

The rapid succession of dips and surges in the stock market last week had the U.S. news media using quasi-apocalyptic language to describe them while also trying to provide some context for their significance.

n Monday, August 8, when the Dow Jones Industrial Average lost over 600 points, the biggest drop since 2008, a CBS News radio broadcast called it a “bloodbath on Wall Street.”

On Tuesday, the tide seemed to shift a little as late gains were made, and the Dow finished the day up over 400 points.

But by Wednesday, CBS Evening News anchor Scott Pelley opened the broadcast by saying “we haven’t seen this since the darkest days of the financial meltdown.” After Wednesday’s Dow drop of over 500 points, Tuesday’s gains had been erased, and then some.

The sense that the country was about to slump into recession yet again was also prevalent in press coverage. A New York Times story from August 11 said: “It feels eerily familiar: Stocks are plummeting. The economy is slowing. Politicians are scrambling to find solutions but are mired in disagreement.”

Later that same day, however, things seemed to be improving, with the Dow again up over 400.  An NPR broadcast said that “the sharp up-and-down turns on Wall Street this week are lurching way up again” in light of some good news on U.S. jobs.

For the week, the Dow was down 1% overall. But it ended Friday on an uptick of 125 points. Brian Williams, on NBC’s Nightly News on August 12, summarized it this way: “What a week it’s been for anybody with money in the market—wild swings every day.”

And for those who did have money in the market, some news organizations also tried to offer practical advice. On the August 9 edition of ABC’s Good Morning America, one segment raised the question, “what does it all mean for your money?” The near universal advice from this and other news organizations: be patient and hold on for the ride.

Last week’s flurry of 2012 election coverage touched on Newsweek’s controversial Michele Bachmann cover, Barack Obama’s re-election prospects in light of the floundering economy, and Texas Governor Rick Perry’s entrance into the GOP race. But most of all, the attention was on Iowa, which played host to an August 11 debate and the August 13 straw poll in Ames. 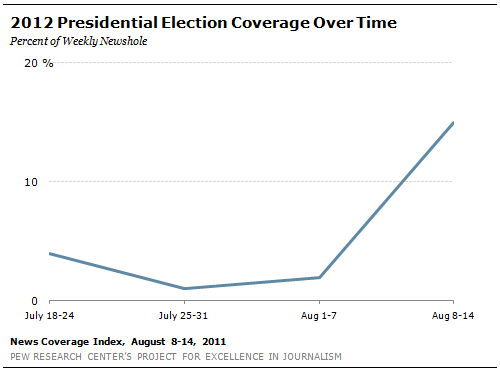 n the lead-up to the debate, an August 11 Associated Press story asserted that seven of the eight contenders who would take the stage would try to “cast themselves as the strongest alternative to one rival: front-runner Mitt Romney.”

The candidates seemed to sense that much was at stake on Thursday’s event as things got heated in the auditorium. The Washington Post reported that “the last vestiges of ‘Minnesota nice’ fell by the wayside during Republican debate here Thursday night,” as two Minnesotans—Tim Pawlenty and Michele Bachmann—sparred about each other’s records.

The straw poll vote was won by Bachmann, who finished narrowly ahead of Ron Paul and well ahead of third-place finisher Pawlenty. On August 14, Pawlenty withdrew from the race, but the poll catapulted Bachmann—who had already emerged as a significant force in the GOP contest—to greater prominence in the national campaign narrative.

“The race, at least in the short term, will focus on [the] trio” of Romney, Bachmann and Perry, declared the New York Times on August 14. Another AP story from August 12 called last week the most consequential week yet in the 2012 Republican nomination fight.

Though not on the campaign trail, Obama found the pundits re-evaluating his chances in light of the bad economic news of recent weeks. CNN’s Jack Cafferty offered this comment on the August 8 edition of The Situation Room: “President Obama’s chances of winning a second term as president may have been downgraded right along with the country’s credit rating.”

The No. 3 story, the riots in the United Kingdom, accounted for 8% of the newshole, although coverage was much higher in the online sector (16%), which generally devotes the most attention to overseas events. There was some debate in the news about what exactly sparked the riots—opportunism and thuggery, a sense of disenfranchisement among the British working class or both. But the consequences of the riots were stark, with many injured and several killed, thousands arrested, and more than $150 million in reported property damage.

The fourth-biggest story was the U.S. conflict in Afghanistan, at 7%. American audiences were given a fresh reminder of the cost of war when 30 U.S. personnel, including 22 Navy SEALS, were killed in a helicopter crash. Much of the news coverage centered on President Obama’s visit to the Dover Air Force base to mourn the deaths, even though media were not allowed to view the return of the military remains.

Finally, Wisconsin politics were once again in the national spotlight as voters took to the polls on August 9 in six State Senate recall elections. The elections were closely followed as Democrats sought to strike back against state leaders who had enacted legislation diminishing the power of the state’s labor unions. The results left Republican incumbents in control of four of the six contested seats. The story was No. 5 for the week, at 5% of the newshole. 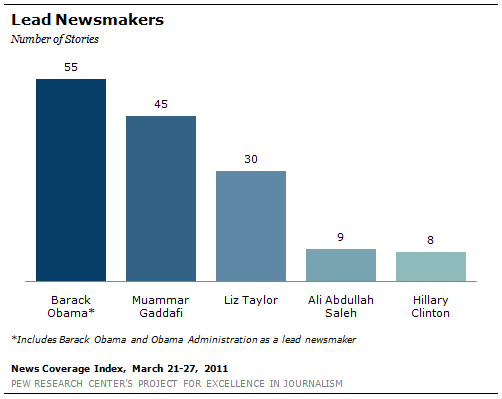 bama was the top newsmaker from August 8-14, a prominent figure in 8% of stories—the same as the week before. (To register as a dominant newsmaker, someone must be featured in at least 50% of a story.)

A number of the other top newsmakers last week were leading figures in media coverage of the 2012 campaign. One of these was Texas Governor Rick Perry, the No. 2 newsmaker last week at 2%. Perry became the center of attention when he officially entered the race, stealing some thunder and media attention from other GOP candidates who were debating and campaigning in Iowa.

At No. 3 (2%) was Minnesota Congresswoman Michele Bachmann, who won the Iowa straw poll vote on August 13. A controversial debate question that focused on Bachmann’s idea about submissiveness in marriage prompted a number of media reports in the following days.

The No. 4 newsmaker last week was former Massachusetts governor Mitt Romney (1%), a leading candidate in most polls.  Romney managed to generate significant media attention even while he downplayed the importance of the events in Iowa and chose not to participate in the straw poll.

The next leading newsmaker, former Alaska governor Sarah Palin (1%), has not yet entered the race, but that has not stopped the media from speculating and following her around as she made an appearance in Iowa.

Tied with Palin among newsmakers was Warren Jeffs (1%), the fundamentalist Mormon leader who was charged with the sexual abuse of minors in his Texas compound. Jeffs, who was recently convicted of sexual assault on two young girls, was sentenced last week to life in prison.