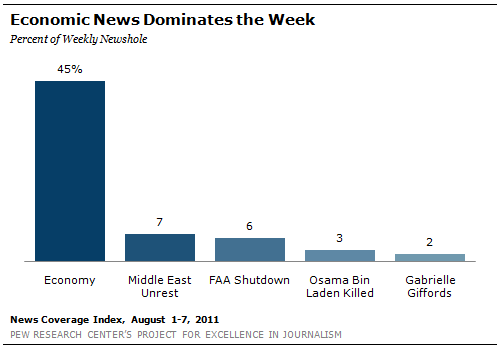 The much disdained debt ceiling deal, followed by a barrage of ominous news from Wall Street and a top credit rating agency, drove coverage of the economy to its second highest level in 2011.

From August 1-7, the economy accounted for 45% of the newshole, according to the Pew Research Center’s Project for Excellence in Journalism—down modestly from 52% the previous week, when the debt debate drama was peaking.

One thing that distinguished last week’s economic coverage was the overwhelmingly negative tone to the news that followed the August 2 debt agreement. That included reports of widespread public dissatisfaction with the deal—and the process that produced it—as well as a 513 point plunge in stock prices on August 4. That was followed by the August 5 bombshell that Standard & Poor’s was downgrading the U.S. credit rating for the first time ever.

Another story that reinforced the sense of gridlock in Washington, the battle over funding the Federal Aviation Administration, was the No. 3 subject last week, at 6%.

The economy was the No. 1 story last week in all five media sectors studied by PEJ, receiving the most attention on cable news (63% of the airtime), which is fueled by the ideological prime-time cable shows. And attention to the deficit and debt ceiling storyline was still high, accounting for almost 60% of all the economic coverage. But the stock market travails and more news on the employment picture combined to account for about another quarter of the economic newshole.

The week’s No. 2 story (7%) was the continuing unrest in the Middle East. The key newsmakers included the Syrian government’s assault on the city of Hama and former Egyptian President Hosni Mubarak’s appearance—infirm and caged—in an Egyptian courtroom, an event that seemed to symbolize the sweeping change underway in that region.

The week’s fourth and fifth stories revisited two of the biggest newsmaking events in 2011. The No.  4 story (3%) focused on Osama bin Laden after a New Yorker magazine piece provided a minute-by-minute account of the May 1 raid on his Pakistan compound that killed the al Qaeda leader. The aftermath of bin Laden’s death had accounted for 69% of the newshole from May 2-8, 2011—making it the single biggest story since PEJ began tracking the news in January 2007.

The No. 5 subject (2%) was Arizona Congresswoman Gabrielle Giffords’ dramatic return to Congress—eight months after she was gravely wounded in an assassination attempt—to vote on the debt ceiling agreement. That shooting rampage had accounted for 57% of the newshole from January 10-16, 2011.

The Debt Deal and Economy: A Grim Media Narrative

In the weeks leading up the eleventh-hour agreement on raising the debt ceiling, the press was consumed with the ups and downs of the negotiating process, often alternating between hopeful and pessimistic coverage as the chances for a significant deal waxed and waned.

But almost as soon as the ink dried on President Obama’s signature, the storyline turned relentlessly negative as various parties—from the man in the street to the Wall Street investor—weighed in on the deal.

of the first tidings of bad news was a CNN poll that surfaced on August 2 and reported that 77% of the respondents believed elected officials had behaved like “spoiled children” during the debt negotiations.

That same day, the Atlantic Journal Constitution sampled public opinion in that region. And the verdict was thumbs down.

“Washington may expect people to cheer the debt ceiling deal negotiated over the weekend, but Georgians such as Beth Gray are still disgusted that partisan rancor brought the country to the brink of crisis," the story stated. “Our government should be fired. Every single one of them," said Gray, 23, a technical writer from Alpharetta. "The Democrats say they won. The Republicans say they won. They’re all idiots."

The August 3 Washington Post made it clear that investors weren’t pleased with the agreement either: “The package did not cheer the stock market, where the major indexes tumbled more than 2 percent on worries that the U.S. economic recovery is stalling and that the debt plan might even undermine it by weakening demand in the next year or two. These fears…have discouraged some investors, especially after political leaders in Washington raised expectations in recent weeks that they would reach consensus on putting the nation’s financial house in order.”

One day later, a USA Today poll put some numbers behind the sour public sentiment.

“The hard-won, last-minute agreement to raise the debt ceiling and cut the deficit gets low ratings from Americans, who by more than 2-to-1 predict it will make the nation’s fragile economy worse rather than better,” the paper reported.

Of the key players in the process, none of them fared well with the public, with President Obama doing the best by getting a 41% approval rating for his role in the negotiations. That topped the ratings for House Speaker John Boehner, Senate Majority Leader Harry Reid and congressional Tea Party members.

Amid all this naysaying came another major event: on Thursday August 4, the stock market plunged perilously, falling 513 points.

“What began as a weak day in the stock markets ended in the worst rout in more than two years, as investors dumped stocks amid anxiety that both Europe and the United States were failing to fix deepening economic problems,” declared the New York Times. “With a steep decline of around 5 percent in the United States on Thursday, stocks have now fallen nearly 11 percent in two weeks.” 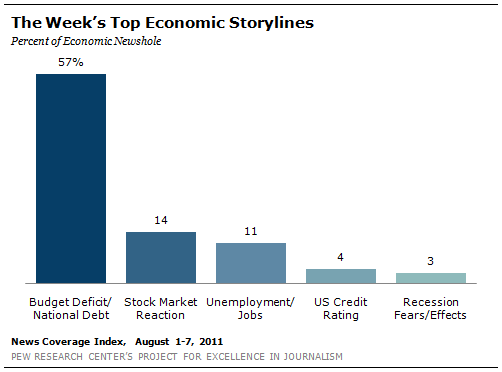 The next shoe dropped on August 5 when Standard & Poor’s registered its dismay with the debt deal by downgrading U.S. credit.

“The credit rating agency on Friday lowered the nation’s AAA rating for the first time since granting it in 1917,” the Associated Press reported. “The move came less than a week after a gridlocked Congress finally agreed to spending cuts that would reduce the debt by more than $2 trillion—a tumultuous process that contributed to convulsions in financial markets….The promised cuts were not enough to satisfy S&P.”

In a week that started with a sense of some relief that a debt agreement had avoided default, the story quickly went downhill from there.

While unrest in the Middle East was the dominant story in the first quarter of 2011—accounting for one-quarter of the newshole—media attention has dropped so significantly since the beginning of the “Arab spring” protests that last week’s coverage (7%) represented the highest level in two months. It was driven by the increasingly bloody conflict in Syria and Mubarak’s courtroom appearance. At the same time, the continuing fighting in Libya has virtually dropped off the media radar screen.

The third-biggest story, (6%) was about the political battle that resulted in a partial shutdown of the Federal Aviation Administration until a compromise was reached late in the week. Much of the media coverage suggested the dispute was another example of a dysfunctional Washington.

On the August 4 edition of ABC’s evening newscast David Muir noted that the FAA showdown resulted from an effort by “some lawmakers…to stop subsidies to small airports [in order] to save some sixteen million dollars a year in taxpayer money…The problem is, while trying to save that $16 million, they were actually costing taxpayers $30 million every day” in lost airport tax revenues and fees on tickets.

The detailed New Yorker piece on the bin Laden raid triggered media reaction to the story and accounted for 3% of the newshole. Perhaps the biggest revelation in the piece was the assertion that the elite team of Navy Seals was clearly on a mission to kill the al Qaeda chief, with capturing him not deemed a viable option.

Finally, the return of Arizona Democratic Rep. Gabrielle Giffords to Congress (2%) prompted an outpouring of emotion.

“U.S. Rep. Gabrielle Giffords received a standing ovation as she entered the floor of the U.S. House of Representatives today to vote in favor of legislation to avoid a default by the U.S. government,” reported the Arizona Daily Star. “Wearing a blue jacket and smiling, Giffords hugged colleagues as she prepared to cast her first vote since January.” 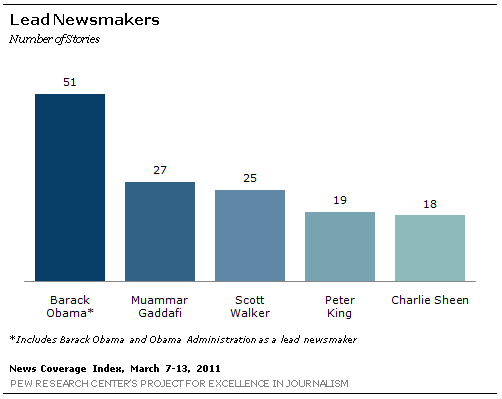 The second leading newsmaker, at 2%, was Gabrielle Giffords as she re-emerged in the public spotlight following her arduous recovery from the shooting attack.

Next, at 1% came two people who were in trouble with the law for very different reasons. One was polygamist sect leader Warren Jeffs, who was convicted of sexually assaulting two young girls. The other was former Egyptian President Hosni Mubarak, whose trial on murder and corruption charges began last week.

The fifth leading newsmaker, also at 1%, was Casey Anthony who had been acquitted in early July after a high profile trial.  Much of the public was outraged that Anthony was not convicted for the murder of her two-year-old daughter Caylee and last week, there was some legal skirmishing over her probation status.