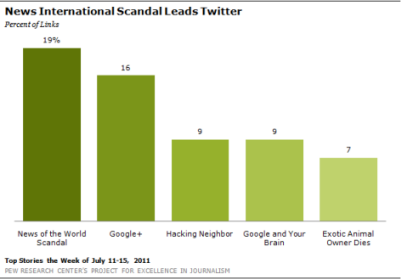 The intensifying phone hacking scandal enveloping Rupert Murdoch’s media empire was the top story on Twitter for the second week in a row, with Twitter users once again aiming sharp criticism at the media mogul’s company.

For the week of July 11-15, 19% of the news links on Twitter were about the scandal, according to the New Media Index from the Pew Research Center’s Project for Excellence in Journalism. While still the top story, that is down considerably from the previous week when the subject accounted for 53% of news links-more attention than any topic has generated in the NMI in the past 10 months.

Twitter users commenting on the scandal showed little sympathy for Murdoch or his employees. “My condolences to the #NOTW workers who’ve lost their jobs. I’m off to hack their relatives’ phones to see how they’re coping,” wrote Fort Knox.

The phone hacking furor generated significant headlines in the mainstream news as the No. 2 story from July 11-17, filling up 12% of the newshole. And a discussion of the scandal on a BBC talk show proved to be the second most popular news video last week.

As is often the case, news about Google also figured prominently in the Twitter news agenda. The No. 2 subject, at 16% of the links featured stories about the demographics of Google+ users, a new social networking site that is expected to compete with Facebook. One story found that early users were overwhelmingly male.

Another story about Google, specifically how search engines may be changing the way our memories work-by altering the way our brains organize and store information-came in fourth with 9% of links. The findings suggested that people have less short-term recall of information that can be accessed online.

The No. 3 story, at 9%, was about a man who hacked into his neighbor’s wi-fi and tried to frame the family for various offenses. And wrapping up the top five, at 7%, was a story about an exotic animal owner who choked to death on a sex toy.

News of the World Hacking

Tweeters focused on several story lines related to the rapidly evolving hacking scandal that led to the closing of the News of the World tabloid, Murdoch’s dropping his bid to buy the BSkyB television operation and the resignation of several of his key employees.

One such storyline was former News of the World reporter Robert Fisk’s essay in The Independent on why he felt he had to leave the Times. Fisk wrote that editors rewrote his stories, and while Murdoch did not personally interfere, his regime changed the paper’s ideology and curtailed its independence.

“Must read,” tweeted FAIRmediawatch, a liberal organization that monitors the media.

One of the other stories that gained attention was about how News International initially tried to thwart the original inquiry into phone hacking. Again, responses were not supportive of Murdoch and News International.

“Lots of talk about how bad it is for MPs and police cosy up to Press. But it’s also bad for Press to cosy up to ANYONE,” wrote fleetstreetfox, speaking of the scandal in general.*

“So #NOTW journalists can’t get into my bank account i now have a security question they won’t be able to answer…how do you sleep at night?” tweeted comedian Jack Whitehall.

A Marijuana Debate Leads on Blogs

The top story on blogs for the week, with 22% of links, was about a federal government ruling that marijuana has no accepted medical use and should remain classified as a highly dangerous drug, despite some states’ approval of marijuana as a treatment for illnesses.

Much of the response to the story was in support of legalizing marijuana and belief that the ruling was misguided.

“It’s such an open-and-shut case, even Jeff Spicoli could comprehend it,” wrote Andrew Belonsky at death + taxes, referring to the stoner character from the 1982 teen movie, Fast Times at Ridgemont High. 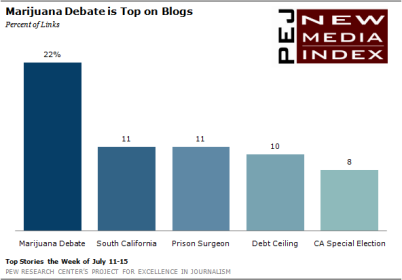 In second place (11%) was a story about a politician in California proposing that 13, mostly conservative counties, break away to form a separate state of “South California.” Bloggers were generally conservatives who supported the idea, although a few liberal bloggers found it comical.

In third place (11%) was a story about a California state prison surgeon, Dr. Jeffrey Rohlfing, who has an annual salary of $777,423, despite not being allowed to treat inmates because medical supervisors do not trust him. Instead he has been relegated to reviewing paper medical histories. Most of the responses were from bloggers who focused on government waste and were angry about Rohlfing’s compensation.

The No. 4 story was about the debt ceiling debate in Washington D.C., a subject that has been a major one in the mainstream news for the past month, but has not garnered much attention on blogs or on Twitter. It generated 10% of blog news links for the week, the first time the debt ceiling debate has made the NMI since May 30-June 3, when it accounted for 8% of the links.

Bloggers were not very vocal about the issue. Many of them posted, without comment, an article about President Obama saying that he won’t sign a bill that will only raise the debt ceiling for a short time-frame.

The most notable response came from PunditKitchen, which was excited that the Debt Ceiling Cat meme could once again return. “In other news, this meme is totally relevant again! Yay!”

Debt Ceiling Cat is a derivative of Ceiling Cat, a lolcat who is seen as a benevolent being, as opposed to the evil Basement Cat. A lolcat is an image of a cat with text indicating what the cat is thinking. It is a prevalent internet meme.

Wrapping up the top five subjects, at 8% of links, was a story explaining the results of a special election in California’s 36th Congressional District where Democrat Janice Hahn defeated Republican Craig Huey. Much of the response was from liberal bloggers who drew attention to an ad run against Hahn that featured a pole-dancing stripper.

Despite topping the Twitter agenda for the past two weeks and registering prominently in the mainstream media, the Murdoch media scandal has not been among the top stories on blogs in that period, according to the NMI. An additional PEJ check of several other blog tracking sites also revealed minimal to modest interest.

The federal government’s decision to keep marijuana classified as a highly dangerous drug provoked an angry reaction among bloggers.

“Talk about being a buzzkill. The federal government really knows how to ruin a good time,” wrote HAHA, JK.

Others took a more serious look at the issue, including the economic implications.

“It could bring in so much revenue, it’s being smoked anyways by a huge section of the population, and it’s MUCH less worse than smoking cigarettes or pounding beers… Plus, the Fed would then be able to move law enforcement money in the War on Drugs to fighting the drugs that are actually super harmful, like all your snorting powders and injectable fun times. Yeah?” wrote Byron Kho at Chatting Uncontrollably.

“The government claims that marijuana lacks safety under medical supervision but that’s because it’s been ruled an illegal substance. You can’t put it under medical supervision if mere possession will land your ass in prison for many years. The thing I never understood was the simple fact that most research indicates that marijuana is less harmful than alcohol. To me it would only be logical if a substance less dangerous than another currently legal substance were also legal,” wrote Christopher Burg at A Geek With Guns.

“Still, if an appeals judgment were based on scientific evidence, rather than political considerations this time around, it’s easy to imagine a very different outcome,” wrote Maia Szalavitz at Fraternal Order of The Dragon.

On YouTube, a tragic accident during a game at the Rangers Ballpark in Arlington, Texas, drew the most attention last week. Fan Shannon Stone fell out of the stands head-first while trying to catch a foul ball tossed by Rangers outfielder Josh Hamilton and later died.

The No. 2 video featured a discussion from the BBC program Newsnight focusing on the British phone hacking scandal, which was the top story on Twitter last week. During the heated debate, comedian Steve Coogan accused former News of the World deputy features editor Paul McMullen of being “morally bankrupt” and “a walking PR disaster.” McMullen was trying to defend the tabloid newspaper.