The continuing drama over

the debt standoff in Washington last week drove coverage of the economy to its second highest mark in 2011 and the highest level in three months.

Meanwhile press attention to a mushrooming media scandal also doubled in the past week.

From July 11-17, the U.S. economy—driven by the stalemated talks over the budget deficit and debt ceiling—accounted for more than a third (37%) of the newshole, according to the News Coverage Index from Pew Research Center’s Project for Excellence in Journalism.

That marks the fourth consecutive week that the subject has been the No. 1 story. In that span, coverage has more than doubled—jumping from 16% to 37%.

In the past two weeks, the skirmishing between the White House and Republicans over the debt ceiling has eclipsed the 2012 presidential race as the nation’s top political story, with campaign coverage slumping to low single digits.

In particular, the economic debate has supplanted the election as the political wedge topic. The subject consumed nearly three-quarters (74%) of the airtime studied by PEJ on the ideological cable and radio talk shows last week. And there were some dramatic twists and turns in the storyline.

“With just weeks remaining before the debt-ceiling deadline, this week in Washington played out like five days of  ‘General Hospital,’” declared the July 16 Washington Post. “There were plenty of theatrics—raised voices, name-calling, even a dramatic exit by President Obama.”
Attention to the No. 2 story, the metastasizing phone hacking scandal in Rupert Murdoch’s media empire, doubled to 12% last week—up from 6% the previous week when it was the third-biggest story.

It is unusual for a media story to have significant staying power in the news narrative. But more dominos fell last week—including the company abandoning efforts to buy the BSkyB television operation and the resignations of former News of the World editor Rebekah Brooks and Dow Jones CEO Les Hinton, two of Murdoch’s closest confidants. For the week, Murdoch himself was the second most prominent newsmaker, behind only President Obama. And last week’s coverage did not include the arrest of Brooks and resignation of top officials at Scotland Yard.

The war in Afghanistan was the No. 3 story (at 5%), with coverage focusing on the assassination of President Hamid Karzai’s half brother and the awarding of the Medal of Honor to Leroy Petry for his valor during combat in Afghanistan.

Next, at 4%, was the 2012 presidential race, which only two weeks earlier had registered at 13% of the newshole. The major newsmakers were reports that Obama had raised a whopping $86 million in the second quarter and controversy over whether Michelle Bachmann’s husband Marcus runs a counseling service that tries to change homosexuals into heterosexuals.

The fifth-biggest story, 3%, was the continuing unrest in the Middle East. Last week, the U.S. waded further into the violence and instability plaguing Syria by declaring that President Bashar Assad had lost the legitimacy as a result of his crackdown on protestors.

Not only has the economy become a much bigger story, it is a bigger story no matter where one looks. The topic was the No. 1 subject in all five media sectors studied by PEJ. And while not all of that coverage was related to the debt/deficit battle, a huge majority 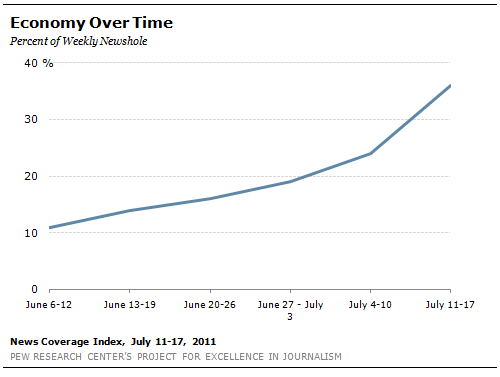 —about 85%—was focused on that issue.

The week started with news reports of the demise of the so-called big deal—an ambitious effort to save as much $4 trillion by tackling such sensitive political hot buttons as taxes and Medicare.

“In a rare Sunday meeting in the White House Cabinet Room, Obama continued to push for a ‘grand bargain’ in the range of $4 trillion worth of deficit cuts over the coming decade, but momentum is clearly on the side of a smaller measure of perhaps half that size,” noted a July 11 AP story.

The next turn in the narrative was a complex proposal introduced by GOP Senate Minority Leader Mitch McConnell that would essentially allow the president to raise the debt limit even as Congress voted its disapproval of such a move.

The initial reaction in the media was tinged with some skepticism. On July 12, NBC correspondent Chuck Todd characterized it as a “bizarre proposal…that could actually be a backdoor way to resolve this crisis…It’s the new backup plan.”

When a number of Republicans objected to McConnell’s plan—a Washington Post headline declared that “Debt plan splits Hill GOP leaders”—he took to the airwaves to warn his party of the political costs of not raising the debt limit.

A July 13 New York Times story quoted McConnell saying in a radio interview that if the government defaults, Obama “will say Republicans are making the economy worse…It is an argument that he could have a good chance of winning and all of the sudden we have co-ownership of the economy. That is a very bad position going into the election.”

Meanwhile speaking on CNN on July 13, Robert Reich, the Labor Secretary under Bill Clinton, warned that a failure to resolve the issue would damage the White House too.

“I don’t think anybody comes out a winner,” he said.  “I think the American public is disgusted, frankly, with all this political maneuvering, they want the debt ceiling raised to the extent that most people are looking at the debt ceiling at all. They want the budget deficit dealt with.”

While some players in the drama were issuing warnings to their side of the political spectrum last week, the ideological talk shows were busy hammering the enemy with overheated rhetoric.

On his July 11 radio show, conservative host Rush Limbaugh was conjuring up comparisons between Obama and a dictator. Complaining about the president’s press conferences on the debt issue, Limbaugh declared that he should “go the full dictator route, just show up as Castro. Do one eight-hour speech once a month and be done with it.”

On the same day on the opposite side of the spectrum, a caller to liberal Ed Schultz’s show evoked comparisons with enemies abroad. “These are extremists that we are dealing with,” he said of the Capitol Hill Republicans. “They want to do what the USSR and al-Qaeda have been unable to do…destroy the U.S. economy.”

For the second week in a row, the more internationally oriented online sector devoted more attention than any other media to the events surrounding the UK hacking scandal. Online the subject filled 21% of the newshole studied (PEJ studies the top stories on any webpage).

The broadcast network morning and evening newscasts devoted the next highest level of attention to the story (13%). It was a particularly hot topic on the network morning shows (17%).

There was one major subtext to th

e Murdoch coverage last week—that the scandal was widening and broadening and creating ever more peril for Murdoch’s media holdings.

In an interview on the July 12 PBS NewsHour broadcast, NPR reporter David Folkenflik described it as “the grand unification theory of scandals here in England. You have got the political establishment back on its heels. You have got the media empire of the most important media player in the country by far, Rupert Murdoch, enmeshed in controversy. And now you have got the question of the police.”

Then came news of the move to cancel the BSkyB bid. “The decision was a humiliating turnaround for Murdoch and for News Corp., which has been seeking government approval for months to take control of BSkyB. Owning the broadcast company would have represented a major expansion of Murdoch’s already-large media empire in Britain,” stated a July 13 Los Angeles Times story.

One day later, the CBS evening newscast reported on another shoe that had dropped, this one on the other side of the Atlantic.

“The FBI has opened an investigation of Rupert Murdoch’s News Corp,” said anchor Scott Pelley. “The bureau is looking into allegations that reporters from the News of the World tabloid were looking for ways to hack into the phones of victims of 9/11.”

Late in the week, there was another bombshell. “Rebekah Brooks, former editor of the News of the World tabloid, resigned Friday as head of the British newspaper division of Rupert Murdoch’s media empire…” stated a Washington Post story. “Brooks has long been one of Murdoch’s favorites, a woman with trademark flaming red hair whom he once described as being like a ‘daughter’ to him.”

Two days later, Brooks was arrested, although coverage of that event occurred too late to be captured in this week’s News Coverage Index.

There was moderate coverage of the war in Afghanistan last week (5%) and much of that focused on a killing with potentially significant implications.

“Ahmed Wali Karzai, the Afghan president’s younger half-brother and southern Afghanistan’s most influential power broker, was assassinated Tuesday by a trusted security aide, dealing a major blow to the region’s stability,” reported a July 13 Wall Street Journal story. “The killing eliminated a man who had earned U.S. praise and condemnation alike, as he helped to combat the Taliban while also allegedly fostering graft and benefiting from the opium trade.”

The summer doldrums may have set in for the 2012 presidential campaign, which finished as the fourth-biggest story last week at only 4%, a minor uptick from the previous week (3%). Michelle Bachmann—who has emerged as a surprisingly potent force in the GOP field in the early media narrative—was the leading campaign newsmaker last week. But the scrutiny of her husband’s counseling practice was unlikely to be welcome.

And events in the Middle East that had riveted the U.S. media earlier in the year have now fallen largely off the news radar screen (3% last week)—despite the ongoing civil war in Libya and the bloody conflict between the Syrian regime and anti-government protestors. 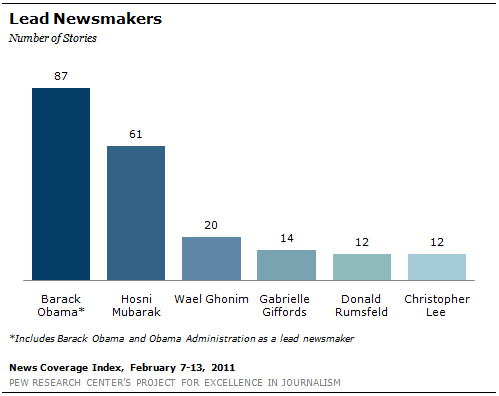 From July 11-17, the leading figure in the news was the man at the center of the deficit faceoff. Barack Obama was a prominent newsmaker in 11% of the week’s stories, up from 8% the previous week. One other key figure in the debt drama, Republican Mitch McConnell, was the No. 3 newsmaker, prominent in 2% of the stories. (To register as a dominant newsmaker, someone must be featured in at least 50% of a story.)

The No. 2 newsmaker was beleaguered media mogul Rupert Murdoch (4%), quadrupling the 1% from the previous week.

The fourth leading newsmaker was Leiby Kletzky (2%), the eight-year-old Brooklyn boy who disappeared on his way home from day camp and was tragically found murdered. Three other figures tied for No. 5, also at 2%.  Former First Lady Betty Ford, who died on July 8, was buried last week. President Karzai’s half brother Ahmed Wali  Karzai, was assassinated last week and Leroy Petry was awarded the Medal of Honor.

For a Second a Week, it’s Debt Crisis and Tabloid Scandal

Weiner’s Bad Week is the No. 1 Story

The Pope Meets the Press