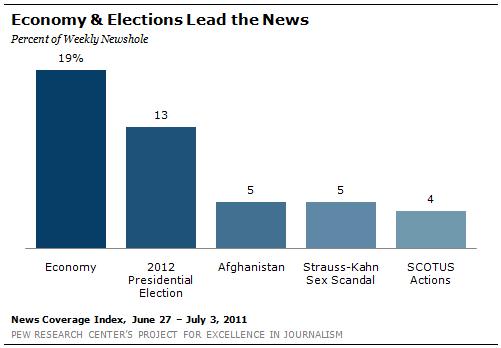 The struggling U.S. economy and the unfolding 2012 presidential race accounted for about one-third of the newshole, further evidence that these two domestic issues have become for now the dominant narratives in the U.S. mainstream media.

From June 27-July 3, the economy accounted for 19% of the newshole, according to the Pew Research Center’s Project for Excellence in Journalism. That marked the second week in a row that economic coverage—driven by the partisan differences stalling deficit reduction talks—has been the No. 1 story.

That was followed, at 13%, by the presidential campaign, which was fueled by GOP Rep. Michele Bachmann’s official announcement of her candidacy. Bachmann was the major player in last week’s campaign coverage, appearing as a prominent newsmaker in more than 40% of the stories about the race. (To register as a prominent newsmaker, someone must appear in at least 50% of a story.)  And in recent weeks, the media narrative has helped elevate Bachmann from the ranks of the long shots to a significant figure in the Republican field.

Last week’s coverage of the economy and election reinforced a trend that emerged in PEJ’s News Coverage Index in late spring. After the first part of the year was marked by major media attention to such international events as the earthquake in Japan, the turmoil in the Middle East and the killing of Osama bin Laden, the press has pivoted to a domestic, and largely Beltway-centric, media agenda. Indeed in the past six weeks, the No. 1 story (the economy at 15%) and the No. 2 story (the election at 11%) have become the staples of the news diet.

In another sign of that turn homeward, last week marked the first time in more than five months that events related to the Middle East did not make the list of top five stories.

The conflict in Afghanistan was the week’s No. 3 story (at 5%), but that actually served to illustrate how difficult it is to sustain significant coverage of the war. Only one week earlier—with President Obama announcing plans to bring home 30,000 troops by next year—coverage reached its peak for the year, at 14%. Only one week later, it dropped by nearly two-thirds.

The fourth-biggest story, also at 5%, was the case involving former International Monetary Fund head Dominique Strauss-Kahn, which took a dramatic turn last week with reports that the woman accusing him of sexual assault had significant credibility problems that undermined the case.

Rounding out the roster of top five stories (4%) was the U.S. Supreme Court, with coverage driven by the 7-2 decision—one that reached across ideological lines—striking down a California law that had banned the sale of violent video games to children. Not everyone was pleased with the ruling.

“Gamer ruling a win for violence,” was the headline atop one Chicago Tribune column.

The U.S. economy was the top story in four media sectors last week, generating the most attention (23%) on cable news.

The majority of last week’s economic coverage, about 60%, focused on the continuing impasse over the country’s debt limit. And the catalyst for much of that coverage was a June 29 press conference in which an unusually aggressive Obama went after the Republicans on the deficit.

“He accused Republicans—no fewer than six times—of favoring corporate-jet owners over average folks in the party’s refusal to consider tax increases as part of a deficit deal,” reported the Washington Post the next day. “And, showing a combative side that Americans rarely see, he said that Republicans ‘need to do their job.’”

If the president’s rhetoric got harsher, that tone was also picked up by the cable commentators who weighed in on the issue from their sides of the partisan divide.

“There he goes again, stoking class warfare to score political points,” she asserted. “Does this president not get America…that all of us actually aspire to be the rich?”

On the other side of the ideological spectrum, MSNBC host Lawrence O’Donnell took aim at the Republicans’ unwillingness to raise taxes.

“The current [GOP] position on tax revenues including the refusal to close tax loopholes is too extreme even for Republicans formerly thought of as conservative,” he said, segueing into remarks by debt commission co-chairman and former Republican Senator Alan Simpson, who suggested that top wage earners need to pay more of their share of taxes.

The next biggest economic storyline, accounting for about one-fifth of last week’s coverage, was the impact of the economy on state and local governments. The major news here was the government shutdown in Minnesota caused by an impasse over that state’s budget.

Bachmann is the Catalyst for Campaign News

Even as the economy was the top story in the media overall last week, it was the presidential election that finished No. 1 on the radio and cable talk shows—accounting for 32% of the airtime studied by PEJ.

And much of that focused on Michele Bachmann, who formally announced her candidacy last week, but who had been prominent in the election coverage since what was widely hailed as a strong debate performance on June 13.

A few months ago, it was Donald Trump who seemed to be the star in the media coverage of the GOP hopefuls. But much of that attention—focused largely on Trump’s questions about Obama’s citizenship and his unorthodox policy pronouncements—seemed to convey his candidacy as quixotic.

The response to Bachmann’s announcement last week was not all positive, as the media reported on some of her controversial positions and verbal gaffes. But in general, it conveyed the sense that she was emerging as a more serious force in the campaign than perhaps previously thought.

A June 27 New York Times story  noted that “Mrs. Bachmann, who has gone from a little-known member of Congress to a nationally known figure in the Tea Party movement, suddenly faces higher expectations in Iowa. Her high name recognition helped propel her into a statistical tie with Mitt Romney in a weekend Iowa Poll by The Des Moines Register.”

That same evening, a report on the CBS newscast stated that “her early rise in the polls suggests she’s striking a chord with people who are sick of Washington.”

And several days later, in a segment on the PBS NewsHour, liberal commentator Mark Shields acknowledged Bachmann’s strong performance out of the starting blocks. 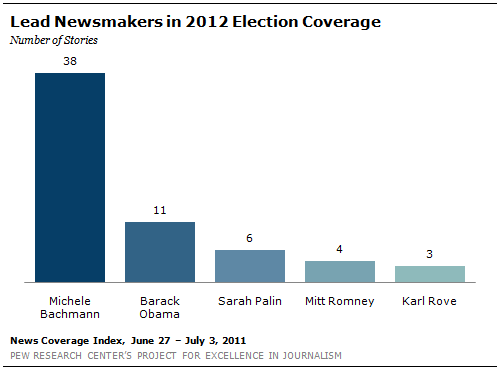 “She has had a…. great introduction,” he ventured. “I think she’s a natural candidate…She has got a natural identification with much of the Iowa Republican Party, which is, culturally and religiously, a conservative party, a party….where Mike Huckabee did very well in 2008, won the caucuses over Mitt Romney.”

Coverage of Afghanistan fell to 5% last week as the focus of attention shifted from Washington—where Obama laid out his troop withdrawal plan—to events in the war zone. Last week’s biggest news was an attack on Kabul’s well fortified Intercontinental Hotel that left about 20 people dead, including the attackers.

A number of news reports stressed that the attack raised new questions about the ability of Afghan forces to maintain security as NATO and U.S. troops withdraw.

Also at 5% was the plot twist in the Dominique Strauss-Kahn story after the case against him was imperiled by credibility problems with the New York hotel worker accusing him of rape.  For much of the media, including the New York tabloids that had a field day with the story, the turn of events might have proved a cautionary tale about a rush to judgment and a premature conviction in the court of public opinion.

But a Washington Post story suggested that that kind of a message was not being heeded in media circles.

“Now that the district attorney’s investigation has yielded information about their star witness’s past that deeply erodes her credibility and seems likely to kill the case, Strauss-Kahn’s camp would like to see the New York media display some compunction,” the story noted, before adding: “That is not how it works.”

The Supreme Court ruling that violent video games were protected by the First Amendment was the key storyline in the No. 5 story, at 4%.  Coverage of the High Court generated the most attention in the radio news sector, accounting for 10% of the airtime studied. 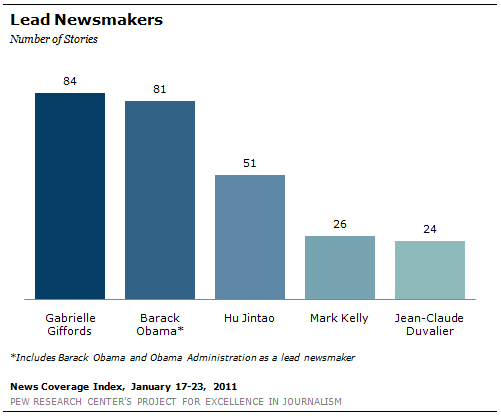 Given his prominent role in the debate over deficit reduction last week, President Obama once again led the competition for media exposure. He appeared as a dominant newsmaker in 8% of the week’s stories, down from 11% the week before.

Someone hoping to take Obama’s job, Michele Bachmann, was the No. 2 newsmaker, registering in 4% of the stories.

Bachmann was followed by two men who had very different experiences with the criminal justice system last week. Dominique Strauss-Kahn (3%) saw the case against him appear to collapse while former Illinois Governor Rod Blagojevich (2%) was convicted on a series of corruption charges last week, including trying to sell the U.S. Senate seat once filled by Barack Obama.

The fifth-leading newsmaker last week was also a defendant in a major criminal case. Casey Anthony, on trial for killing her two-year-old daughter, was a dominant newsmaker in 2% of the stories from June 27-July 3. She was acquitted of that murder on July 5.