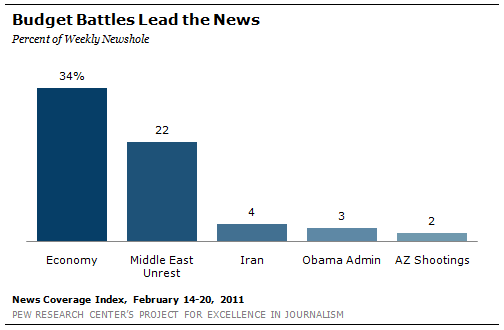 After several weeks of being overshadowed by Mideast turmoil, domestic policy and politics returned to the news with a vengeance last week.

At the same time, coverage of the often violent unrest in the Muslim world fell by almost half, even as democracy movements spread from Egypt to Bahrain and Libya.

For the week of February 14-20, two pitched budget battles—one in Washington, the other in Madison, Wisconsin—drove coverage of economic issues to 34% of the newshole, according to the Pew Research Center’s Project for Excellence in Journalism. That marks the most economy-related coverage in a single week since December 6-12, 2010, when it reached 40% of the newshole studied by PEJ’s weekly News Coverage Index.

Taken together, three storylines—Obama’s $3.73 trillion budget, the deficit and state budget crises highlighted by Wisconsin protests over the governor’s attempt to cut union benefits and bargaining power—accounted for more than 80% of the week’s economic coverage.

Meanwhile, protests in the Middle East continued to generate major attention for the fourth week in a row, although that coverage was diminished and the venues shifted. At 22% of the newshole, coverage was down from 40% the previous week and 56% the week before that. The unrest in Egypt—which dominated recent coverage and resulted in President Hosni Mubarak February 11 departure —accounted for less than half of last week’s Mideast coverage.

Instead, as the democratization drive in Egypt turned from dramatic protests to a political process, the cameras moved to the streets of Benghazi, Libya and Manama, Bahrain where demonstrations provoked violent reactions from authorities.

Coverage of another country in the region, Iran, accounted for an additional 4% last week. Much of that also involved anti-government rallies, including major demonstrations on February 14. But some included assessments of Iran’s nuclear program as well as the sailing of two Iranian ships through the Suez Canal for the first time in more than three decades—a development Israel viewed with alarm.

The week’s No. 4 story (3%) was coverage of the Obama Administration itself, including his awarding of the Medal of Freedom to 15 recipients, including former President George H.W. Bush.

The week’s fifth-biggest story, at 2%, was continuing coverage of the January 8 Tucson shooting that killed six and seriously wounded Congresswoman Gabrielle Giffords. Some of last week’s coverage included the revelation that one firefighter, since resigned, declined to go to the crime scene that day, reportedly because had some political differences with other firefighters.

One bellwether of the media’s interest in a story is the talk show-driven cable news universe populated by Fox News, CNN and MSNBC.

Two weeks ago, events in the Mideast dominated the airwaves on all three channels. Last week, as the protests abroad spread, two of the channels largely switched their attention to economy-related issues. The economy and its various storylines accounted for more than one-third of the time studied on Fox and more than half on MSNBC. Only on CNN, with its greater emphasis on international coverage, did the Mideast remain the No. 1 story, accounting for nearly 40% of its coverage.

The budget stories at the heart of the economic coverage were triggered last week by Obama’s unveiling of  his $3.73 trillion blueprint, a document that was criticized by “Republicans and Democrats alike…for cutting too little,” in the words of Fox News anchor Shannon Bream.

Some of the criticism stemmed from what was seen as the president’s unwillingness to talk about the hard deficit-reduction choices—entitlements such as Social Security and Medicare. The GOP in particular, was critical.

“The White House projected Monday that the federal deficit would spike to $1.65 trillion in the current fiscal year…adding pressure on Democrats and Republicans to tackle growing levels of debt,” reported the Wall Street Journal on February 14. “But Mr. Obama’s plan is likely to be rewritten by Republicans who control the House, as proposed spending cuts in his budget fall short of the reductions congressional Republicans are seeking.”

Some of the coverage also focused on the delicate political game being played by both parties concerning the more painful choices for shrinking the deficit.

On the February 15 broadcast of PBS’s NewsHour, anchor Judy Woodruff noted that Obama said “he’s not taking on the entitlements, Social Security, Medicare and Medicaid, because he wants to wait until everybody can sit down at the table, Democrats and Republicans, and talk about it like adults.”

To which PBS political editor David Chalian added: “I spoke to a Republican aide on Capitol Hill that said, ‘yes, we all have to jump into the pool at the same time.’ But nobody wants to be that first person in, because they’re afraid that there will be sort of demagoguing against what they present.”

If the nation’s finances triggered some rather careful political sparring in Washington last week, bruising all-out budgetary battles were already in full swing in other parts of the country. Nowhere was this more evident than in Wisconsin, with the eruption of large and emotional protests and some counter protests over Republican Governor Scott Walker’s proposal for public union concessions that would eliminate collective bargaining rights.

Unions make up a key pillar of the Democrats’ electoral and fundraising base and some commentators have depicted the Wisconsin battle not only as a crucial test of union muscle, but as a pivotal battle that could determine the broader course of U.S. politics.

“We are on the front line for the ideological fight for America,” declared liberal MSNBC host Ed Schultz who hosted his February 18 show from Madison. The unions “aren‘t asking for more money,” he declared. “They‘re fighting to hold on to the American dream…They want the right to negotiate, the right to hang on to their hard-earned money.”

From the other side of the political spectrum, the view was different. On his February 17 radio show, conservative talker Rush Limbaugh put the blame for what was happening in Wisconsin squarely on liberals and President Obama.

At week’s end, there was no end in sight to the impasse as 14 Democratic state senators continued their self-imposed exile in Illinois in an effort to block consideration of the governor’s proposal.

The Mideast: From Egypt to Libya

In the wake of President Hosni Mubarak’s decision to step down on February 11, some of the media attention on Egypt naturally shifted to the more subtle and slowly developing pace of political reform and restructuring.

“The army has kept the population on its side during the turmoil and promised to lift a decades-old emergency law, but is under pressure from activists who spearheaded the revolution to act swiftly to advance civil freedoms in the new Egypt,” noted a February 18 story on MSNBC.com.

And with the Egyptian storyline shifting from the Tahrir Square to the backrooms, more of the week’s coverage shifted to the street protests spreading to other countries. While about 40% of the Mideast unrest coverage still focused on Egypt last week, another 40% involved the anti-government protests in Bahrain and Libya.

Indeed, dramatic events occurred last week in Bahrain, the small Shi’ite dominated Persian Gulf state where demonstrations erupted against the Sunni monarchy. As was the case with Egypt, a good deal of the media narrative focused on the U.S. trying to balance democratic ideals with its strategic interest in a country that acts as headquarters for the U.S. Fifth Fleet.

“The free flow of oil, the containment of Iran and the defeat of al Qaeda…those are the stakes in the Persian Gulf,” declared CBS correspondent David Martin last week.

Violence also erupted in the North African country of Libya, where dictator Muammar Gaddafi made news by responding forcefully against anti-government protests. But with a government that has traditionally been hostile to the U.S. and inhospitable to foreign reporters, covering the upheaval there was more daunting.

“The heart of the revolt in Libya is in the eastern city of Benghazi, where dozens of people have died in recent days and tens of thousands of protesters have taken control of many neighborhoods,” stated the Los Angeles Times on February 20. But as the story notes, the challenge of dislodging Gaddafi is a daunting one given the “police state” he has established there.

Coverage of the Islamic Republic of Iran generated another 4% of last week’s coverage. Some of that coverage examined the progress of that nation’s nuclear program as well as its naval foray through the Suez Canal. But most was focused on internal unrest, as the protest movement that emerged in the wake of the disputed June 2009 presidential elections re-established itself. Even so, Anderson Cooper’s February 14 report on CNN suggested some of the difficulties facing demonstrators in that country.

“Hundreds of thousands of Iranians reportedly took to the streets today. The Iranian regime doesn’t want you to know about it, though, doesn’t want you to see the pictures… Iran is more efficient in their crackdown than the Egyptian government was,” Cooper said. “They won’t allow foreign reporters in the country. They reportedly shut down train service, cell phones and responded to protesters with tear gas, beatings and arrests.” 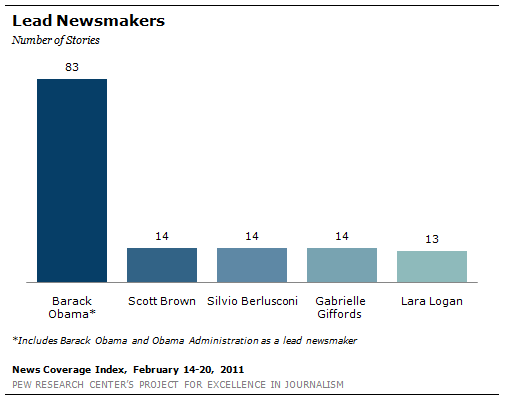 In the week in which he rolled out his budget, Barack Obama generated the most media attention, registering as a prominent newsmaker in 9% of the week’s stories, the same number as the previous week. (To be considered a prominent newsmaker, a figure must be featured in at least 50% of the story).

No one else came close to matching the president’s coverage. The next three newsmakers, (all at 1%) were three public officials in very different circumstances.  Scandal-plagued Italian Prime Minister Silvio Berlusconi has been in the news for allegations that, among other things, he paid a minor for sex. Scott Brown, the new Republican Senator from Massachusetts, released a memoir that detailed the very difficult childhood he had to surmount to become a lawyer, a Massachusetts state senator and eventually, a U.S. senator. And Arizona Congresswoman Gabrielle Giffords continued her remarkable progress from brain injury in the wake of the January 8 shootings.

The next leading newsmaker, also at 1%, was CBS correspondent Lara Logan, who was sexually assaulted and beaten on February 11 while covering the demonstrations in Cairo. The incident triggered a rash of commentary, not all of it illuminating, about the balance between a reporter’s need to cover a story and the risk of putting oneself in harm’s way.

O.J. Leads the Way in a Week of Déjà Vu News