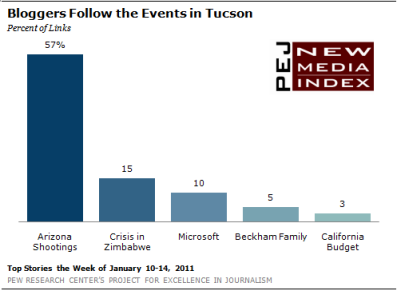 The January 8 shootings in Tucson that killed six and severely injured Congresswoman Gabrielle Giffords drew more attention in the blogosphere than any subject in the past eight months.

From January 10-14, the tragic event received 57% of the news links on blogs, according to the New Media Index from the Pew Research Center’s Project for Excellence in Journalism. (In a clear indication of the international flavor of blogging, the last time a subject attracted more interest was May 10-14, 2010, when the UK elections generated 61% of the links.)

The shooting story was also a major event in the mainstream media last week, where it filled a whopping 57% of the newshole.

Earlier this week, PEJ produced a detailed look at both the mainstream media coverage of the event as well as the subjects and tone of the discussion on blogs and Twitter. To help examine the conversation about the shootings in social media, that report employed Crimson Hexagon, a technology that analyzes online media by identifying statistical patterns in the words used to express opinions on different topics.

While the events in Arizona far outpaced all other subjects, the next largest stories in the blogosphere were a mix of politics, celebrity, and technology.

The No. 2 subject, with 15% of the week’s links, was the violence in Zimbabwe that was blamed on followers of President Robert Mugabe. According to the BBC, the situation reached a crisis point amid escalating political violence.

A video of a BBC interview with Microsoft chief executive officer Steve Ballmer was the third biggest story at 10%. The major piece of news from the interview was the hint that Microsoft will support the use of Kinect motion controllers with PCs in the near future.

The news that soccer star David Beckham and his equally famous wife Victoria are expecting their fourth child was the fourth story last week, at 5%.

And an interactive Los Angeles Times web page where visitors could try their own hand at trying to balance California’s state budget was fifth, at 3%.

On Twitter, last week, there was significant activity related to the shootings in Arizona as users shared their thoughts and spotlighted new developments. (See PEJ’s analysis here). But the subject did not register as one of the top five stories in PEJ’s NMI. This is because the NMI is based on a measurement of links to news stories as identified in the tracking site Tweetmeme, and most tweets about the shooting did not include links to news reports, but were rather an expression of ideas or retweets from other sources.

The subjects on Twitter that generated the most news links last week were largely focused on the business aspects of technology as a number of these stories received virtually equal attention. 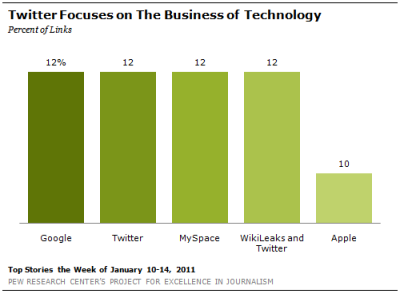 New Google products, at 12% of the links, were the top subjects as two articles drew interest. One was a Mashable piece about the expansion of the company’s URL shortener called goo.gl. The other was a TechCrunch story about Google’s new conversation mode for Google Translate which allows users to speak one language into their phone and have the app read it aloud in another language.

Business stories about Twitter itself were No. 2, also at 12%, including a report that the company’s new CEO Dick Costolo has nailed down a long-term vision for the site and a story that the company was considering a move of their headquarters to Brisbane, California.

Financial problems for MySpace, which have led to a 47% reduction in staffing, were the third- largest subject, also at 12%.

That was followed (12%) by an opinion piece by Wired’s Ryan Singel applauding Twitter’s response to a court order from the U.S. government in the investigation into the WikiLeaks scandal. Twitter challenged the court order and, in doing so, stood up for the user according to Singel.

Stories about Apple were fifth, at 10%, led by a piece by Mashable’s Ben Parr predicting that even though Verizon is about to end AT&T’s exclusive deal with the iPhone, it will not be the major blow to AT&T’s business that many are predicting.

Four of the five top news videos on YouTube last week were the same as the previous week. To see the list and view the BBC’s footage of polar bears playing with spy cameras, click here.

A prominent Web tracking site Icerocket, which monitors millions of blogs, uses the links to articles embedded on these sites as a proxy for determining what these subjects are. Using this tracking process as a base, PEJ staff compiles the lists of links weekday each day. They capture the top five linked-to stories on each list (25 stories each week), and reads, watches or listens to these posts and conducts a content analysis of their subject matter, just as it does for the mainstream press in its weekly News Coverage Index<. It follows the same coding methodology as that of the NCI. Note: When the NMI was launched in January 2009, another web-tracking site Technorati was similarly monitoring blogs and social media. PEJ originally captured both Technorati’s and Icerocket’s daily aggregation. In recent months, though, this component of Technorati’s site has been down with no indication of when it might resume.

In the Blogosphere, Calls for Bipartisanship and Confrontation

A Special Report on the Media and the Tucson Shooting