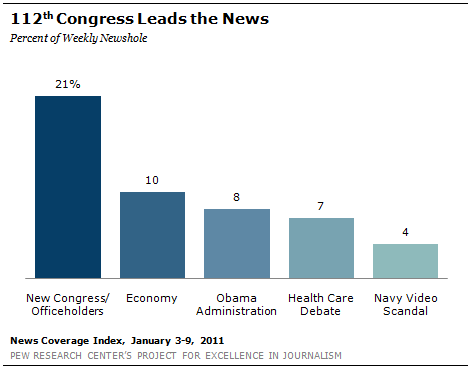 At least until the shocking weekend shooting of an Arizona Congresswoman dramatically altered the narrative, the prospects of political conflict from a new Congress and changes in the White House dominated last week’s news agenda.

For the week of January 3-9, coverage of the 112th Congress—with a GOP-led House—as well incoming officeholders around the country filled 21% of the newshole, according to the Pew Research Center’s Project for Excellence.

One related subject (the No. 3 story at 8%) involved changes in the Obama Administration, most notably the naming of former Commerce Secretary William Daley as chief of staff. Another (No. 4 at 7%) was the health care debate, with most of the coverage focused on now-postponed Republican plans to introduce a bill to repeal last year’s health care reform law.  Taken together, coverage devoted largely to the political realignment in the wake of the November 2 elections accounted for more than one-third (36%) of the overall newshole last week.

But the political world, along with the rest of the country, was rocked by the January 8 shootings in Tucson that killed six people, including U.S. District Court Judge John Roll, and critically wounded Democratic Congresswoman Gabrielle Giffords. The first hour of coverage included conflicting reports with a number of news organizations erroneously reporting that Rep. Giffords had died (see sidebar for more).

The tragedy occurred too late in the week to register as a top story in PEJ’s News Coverage Index, accounting for 1% of the coverage examined. But a rapidly developing storyline examined whether it would serve to moderate the angry and polarizing rhetoric surrounding public policy issues. In that respect, the Tucson rampage altered a narrative that, for much of the week, had focused on the prospect of heightened tensions and partisanship between a Democratic president and a Republican House.

Indeed one of the events expected to trigger such a clash, the scheduling of a January 12 House vote to repeal the health care bill, was delayed in the wake of the Arizona carnage.

The week’s No. 2 story, at 10% of the newshole, was coverage of the economy, which ranged in subject from new unemployment numbers and grim state finances to the debate over whether to raise the debt ceiling. Rounding out the top five list, (No. 5 at 4%) was the fallout from the controversial videos made by Navy Captain Owen Honors, who was relieved of command last week.

A New Day in Washington

Last week’s coverage of the changing of the guard in Washington was part pomp, part circumstance and part substance.

The formal symbol of the new political environment was the swearing in of new Republican House Speaker John Boehner. The Washington Post noted the stylistic differences between Boehner and his predecessor, Nancy Pelosi:

“Nancy Pelosi brought camera crews and dignitaries into her childhood Baltimore neighborhood where a street was being renamed in her honor, while John Boehner is bringing his 11 siblings from working-class Ohio to Washington for a private reunion,” a January 3 story noted. “Austerity is the theme of Boehner’s ascendancy to House speaker this week…in stark contrast to the more lavish festivities that accompanied Democrat Pelosi’s swearing-in four years ago.”

It took only hours for the narrative to move to the potential for increasing conflict between the new Congress and the White House. On John King’s January 3 CNN program, pundit Roland Martin dismissed fellow commentator’s John Avlon’s suggestion that the productive lame duck session of Congress might presage cooperation and bi-partisanship to come.

“I think John Avlon’s theme song is ‘we are one.’ It’s like ‘oh, it’s so wonderful and nice’”… But come January 5th, it ain’t happening,” Martin asserted.

The looming prospect of House investigations that would embarrass the White House was another theme. A January 5 report from Andrea Mitchell on the NBC newscast examined incoming chairman of the House Committee on Oversight and Government Reform, Darrell Issa, who on Rush Limbaugh’s radio show called Obama “one of the most corrupt presidents of modern times.”

“He’s the new cop on the beat, Darrell Issa, the Republican’s top watchdog, potentially the Obama Administration’s worst nightmare,” Mitchell reported. Issa, she said, planned “as many as 280 hearings in the first year,” on subjects ranging from the stimulus package to WikiLeaks.

Not all of the stories suggested Democrats would be merely reacting. A January 6 New York Times article reported Democrats planned to “mount a vigorous defense of President Obama’s health care legislation” in response to Boehner’s decision “to schedule a vote next Wednesday on a complete repeal of the health care law…Senior Democratic officials said their effort would be managed by a rapid response operation [that will] monitor Republican claims, send out fact-checks and deploy a team of surrogates to get their views on television.”

A good deal changed on Saturday. The Arizona shootings prompted Republicans to push back that scheduled health care vote, and on the weekend TV talk shows, representatives from both sides talked about the need for more civility in politics. But there was plenty of skepticism that a kinder gentler dynamic would take hold for long.

As early as Sunday, January 9, a posting on the Wall Street Journal site reported that “Former House Majority Leader Dick Armey, a Texas Republican, threw doubt on lawmakers’ promises to restore civility to the debate because they have a tendency to fall aside once the news fades. ‘It’s sort of like New Year’s resolutions,’ he said on ‘This Week.’”

A White House Shakeup and a Battle Rejoined

The No. 3 subject, at 8%, was coverage of the Obama administration—which focused largely on a series of personnel moves, such as the appointment of William Daley as chief of staff, the naming of Gene Sperling to head the national economic council and the announced departure of press secretary Robert Gibbs.

The White House changes got the most attention in the two media sectors that include the ideological talk shows, cable (12%) and radio (16%).

Daley’s selection got the most coverage. A media consensus quickly formed that Obama was trying to shore up his centrist credential and rebuild bridges. “With extensive experience as a businessman and Wall Street executive, Daley comes to the administration positioned to help the president rebuild his frayed relationship with the corporate world,” the January 7 Washington Post declared.

Coverage of health care reform, the week’s No. 4 story at 7%, focused in large part, on plans to introduce a bill in the House to roll back the controversial legislation that passed in March of 2010.  The subject generated the most attention, 14%, in the cable sector.

An Associated Press story on January 4 noted that a Republican repeal effort would face significant legislative obstacles and entail some political risk.

“Ultimately, Obama still has his veto pen, and Republicans aren’t anywhere close to the two-thirds majorities they would need to override,” the story stated. ‘Repeal and replace’ worked as a campaign slogan to motivate voters concerned about the growing reach of government under Obama. But a single-minded focus on repeal could backfire as a Republican governing strategy. Polls show that some parts of the law are popular, and many Americans would have wanted even bigger changes.”

Two men whose relationship may well determine what happens in Washington in the next two years were the leading newsmakers last week. New Republican House Speaker John Boehner was a dominant newsmaker in 5% of all the stories studied last week, followed closely by President Obama (also 5%). To register as a dominant newsmaker, a figure must be featured in at least 50% of a story.

The third-biggest newsmaker (4%) was Navy Captain Owen Honors, who was relieved of his command of the aircraft carrier USS Enterprise following the discovery of videos he had made featuring lewd and crude content.

Also making the top five list were two more key players in last week’s Washington reshuffling. Newly named Obama chief of staff William Daley was No. 4, registering in 3% of the stories, followed by outgoing Speaker of the House Nancy Pelosi, at 2%.  John Wheeler, a former Pentagon official whose body was found in a Delaware landfill, was also at 2%.