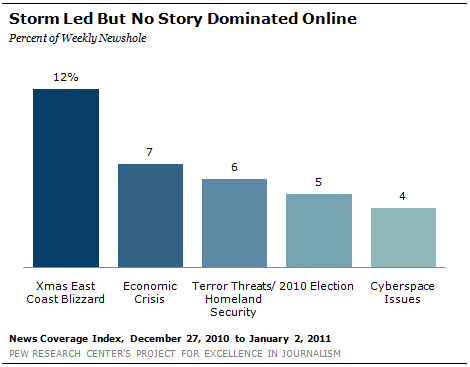 werful East Coast winter storm—and complaints about the cleanup effort that followed it—topped the online news agenda last week, according to a special News Coverage Index from the Pew Research Center’s Project for Excellence in Journalism.

No single subject really dominated the news websites during the week of December 27-31. But the story that led—the first Eastern “snowpocalypse” of the season—managed to surpass coverage of the U.S. economy, a story that had recently led the news overall, as well as in the online sector. The storm filled 12% of home page coverage on the 12 websites studied in PEJ’s weekly index. Although PEJ’s weekly NCI normally includes more than 50 media outlets in five different sectors, this report focused solely on the news agenda in the nation’s most-viewed news websites. PEJ’s index studies news websites that attract the largest audiences of their kind.

The snowstorm, which struck along the coast from Philadelphia to Boston on December 26—dropping as much as 20 inches of snow—snarled the Eastern Seaboard as holiday travelers tried to make their way along busy and treacherous highways. But unlike the Midwestern storms of mid-December, which among other things, caved in the roof of the Minneapolis Metrodome, online sites devoted a significant portion of their coverage to the Eastern event. (During the week of December 13-19, that storm did not even make the top 10 stories on the web).

The No. 3 subject last week, at 6% of online coverage, was an amalgam of stories about U.S. efforts to prevent terrorism. News websites posted stories about the Transportation Security Administration’s efforts to increase security on airplanes, the U.S. terror watch list, and the absence of major terrorist threats on New Year’s Eve.

At No. 4 was the aftermath of the November 2 midterm elections, with some winners sworn in and one loser—Delaware Senate candidate Christine O’Donnell—the subject of federal scrutiny over her use of campaign funds. That story made up another 5% of the week’s news on the web.

At No. 5 was another subject that was an assortment of storylines around the common theme of cyberspace. Those stories—which included coverage of hackers and online security and trend pieces on the use of social media—accounted for 4% of the web newshole.

Bad weather—and its impact on daily life—frequently makes for big news. And last week, the most popular news websites devoted the most  coverage to what the Associated Press called a “powerful East Coast blizzard” that “menaced would-be travelers by air, rail and highway” in a story on the AOL News site on December 26.
The storm, which hit as many travelers were returning from holiday destinations, dropped more than a foot of snow in many locations. And web-based news outlets gave the dramatic display by Mother Nature their own unique coverage.

On December 28, CNN.com posted a slideshow depicting images of New York City under a blanket of the white stuff. That same day, the site posted an amateur contributor’s—or iReporter’s, in CNN parlance—time-lapse video of the snowfall outside his New Jersey home. The Huffington Post over the course of the storm (Dec. 26-27) live-blogged the snowfall, linking to news reports and posting photos. MSNBC.com on December 28 posted a video of a New York City plough accidentally hitting a Ford Explorer.

In New York City, where the storm’s impact was greatest, the online coverage quickly turned to the bungled emergency and cleanup efforts.

December 29 NYTimes.com story reported on Mayor Michael Bloomberg’s address to the city, in which he said he was “extremely dissatisfied” with its handling of the emergency.
The mayor’s assessment was conveyed by Bloomberg News, part of the mayor’s  financial information company:  “New York City’s emergency system was ‘overwhelmed’ by the Dec. 26 blizzard that dumped 20 inches of snow, leaving vehicles marooned and ambulances unable to reach the sick, injured and dying, Mayor Michael Bloomberg said.” (The Bloomberg News story was published on the home page of Google News on December 29, the day of Bloomberg’s debrief with the people of New York.) The mayor also attributed the mess to uncooperative residents, but some online stories noted that he was not escaping blame.

“Under fire for what some perceived as the city’s sluggish response to the blizzard that dropped 20 inches of snow on the city and surrounding area, Bloomberg on Wednesday deflected some of the criticism,” read an Associated Press article that appeared on Yahoo News on December 30.

News about the economy, the No. 2 story on leading news websites last week, was mostly upbeat. The leading economic storyline involved the employment situation with CNN.com and MSNBC.com among those reporting that new jobless claims had fallen below 400,000 for the first time since the summer of 2008. Other sites ran stories about heavier consumer spending and an increase in bank lending. Foxnews.com and the Huffington Post, however, also focused on a weak spot—the anemic housing market—and pointed to new fears of a double-dip housing crisis.

A collection of unrelated stories about terrorism threats and prevention ranked at No. 3 for the week. On December 27, WashingtonPost.com featured two stories on its home page about TSA security efforts—one about the debate over vetting air passengers and cargo, another about Secretary of Homeland Security Janet Napolitano’s commitment to press on with full-body scans and pat-downs.

The liberal site Huffington Post ran a New York Times article about Daily Show host Jon Stewart’s advocacy on behalf of September 11 responders in the face of a Republican filibuster of a bill to provide them with health care. (The measure eventually passed.)  And the Fox News site published a story on December 28 about a Midwestern grandmother, a Muslim convert, who is being investigated for links to terrorism.

A handful of stories following up on the 2010 mid-terms made up the No. 4 topic online last week. Several sites reported on a federal inquiry on unsuccessful Delaware Republican Senate candidate Christine O’Donnell, a tea party favorite. Other stories focused on the inaugurations that were being celebrated at the turn of the year.

The end of 2010 also gave some outlets reason to reflect on issues in cyber space, which was the No. 5 story last week on major news websites.  MSNBC.com pointed to the online security issues that the world may face in 2011, including “hacktivists.” USAToday.com also published a story about how people are increasing their connectivity with new technologies, such as smart phones, and social media platforms like Facebook and Twitter.

The lead newsmaker last week among top news web sites was a former Russian oil tycoon who was sentenced to six more years in a Siberian prison camp (To register as a lead newsmaker, a figure has to appear in at least 50% of that story.) Mikhail Khodorkovsky, registering in 4% of all stories examined, was an early challenger to Prime Minister Vladimir Putin. And according to a December 30 story posted on the Wall Street Journal site, his imprisonment is “widely seen as retribution for the billionaire’s efforts to challenge the Kremlin’s control.”  Khodorkovsky, who has already served seven years, is in prison on embezzlement charges.

Barack Obama, normally the top newsmaker of the week, appeared at No. 2, in 3% of all stories. The president and his family spent the week vacationing in Hawaii and made every effort to maintain a low profile, with the press corps restricted to a safe distance from the first family.

Also tied for No. 2 was the former Delaware Senate hopeful Christine O’Donnell, who attracted copious national media attention with her dramatic upset of establishment Republican Mike Castle in the state’s fall primary. O’Donnell’s campaign foibles and personal idiosyncrasies were well documented throughout the campaign, and new charges that she misused her campaign funds returned her to the spotlight last week.

Israel’s former president Moshe Katsav ranked as the No. 3 newsmaker last week after being convicted on Dec. 30 of rape, sexual assault and harassment.

Two other top newsmakers (at 1%), the second-chance football player Michael Vick and conservative commentator Tucker Carlson, found their fates intertwined last week. Carlson made headlines when he said, on the Fox News Channel, that Vick “should have been executed” for killing dogs. Carlson was reacting to Vick’s return to professional football as a Philadelphia Eagles quarterback after his stint in prison for running a dogfighting operation.

About this Special NCI

Typically, PEJ’s News Coverage Index examines 52 different outlets across five media sectors. However, this week’s NCI is a special edition focusing solely on news websites. Specifically, PEJ examined the home pages of the 12 biggest news websites by audience. The percentages are based on "newshole," or the space devoted to each subject in print and online and time on radio and TV. Our methodology for the typical NCI is available here. (See List of Outlets.)

Nature, Crime, and Politics Challenge Iraq in the News