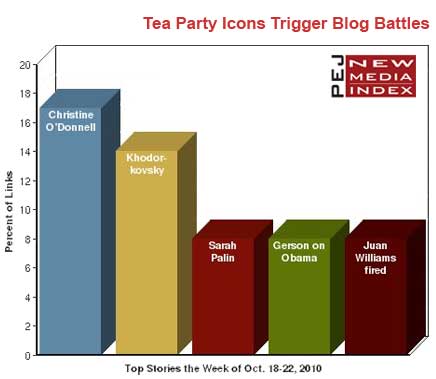 The No. 1 topic, at 17% of the links from October 18-22, stemmed from O’Donnell’s comments during an October 19 debate, according to the New Media Index from the Pew Research Center’s Project for Excellence in Journalism.  In the debate she questioned an aspect of the First Amendment, asking, "Where in the Constitution is separation of church and state?"

A day before, in Reno, Nevada, Palin proclaimed that her supporters couldn’t "party like it’s 1773" until Washington is full of like-minded conservatives. Those remarks ranked No. 3 for the week at 8% of the links.

Both quotes provoked pointed and partisan commentary from bloggers. Liberal bloggers belittled O’Donnell’s question about church and state, saying it illustrated her ignorance of the Constitution. The blog response in this case came primarily from conservatives rising to Palin’s defense. After a few commentators on Twitter mocked Palin’s reference to the year 1773, conservative bloggers jumped in, accusing Palin’s critics of not knowing that that was the year of the Boston Tea Party.

The election was also the biggest story in the mainstream media, but with a focus on campaign strategy surrounding individual races rather than choice quotes.

The second-biggest topic on blogs last week, at 14%, was an op-ed in the Los Angeles Times by Mikhail Khodorkovsky, the former head of Yukos, the Russian oil company, who has been in prison since 2003 on fraud charges. Khodorkovsky wrote of hopes for a new political generation in Russia that will not accept corruption. Numerous Russian-language blogs picked up on the story, offering a Russian translation and adding their thoughts.

Tied for third place was an op-ed by Michael Gerson in the Washington Post deriding President Obama as an "intellectual snob" who "resorts to reductionism, explaining his opponents away." Bloggers from both the left and right chimed in, disagreeing about the merits of the column.

And the No. 5 story last week, receiving 8% of links, also generated substantial coverage in the mainstream media-NPR’s firing of Juan Williams for his remarks about Muslims on Fox News. Most of the response to Williams’ comments-that he gets "worried" and "nervous" when seeing people in "Muslim garb" on planes-came from liberals critical of Williams.

With 11% of links, the most popular story on Twitter last week demonstrated a homemade technological feat: an iPhone and HD video camera launched 100,000 feet into the atmosphere by a weather balloon.  Cinematographer Luke Geissbuhler and his son launched the device and then tracked it till it landed in a tree 30 miles from its launch location.

"Wow!" said @NickJunior and @dylan_jones noted, "Such a cool dad, video is wicked." 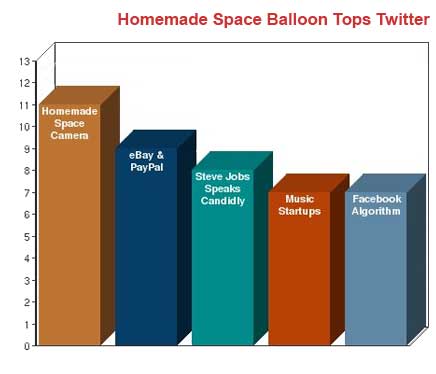 Another Mashable article that quoted Steve Jobs talking candidly about the state of Apple and its competitors attracted 8% of the links.

The No. 4 story (7% of links) evaluated why most music startups are destined to fail.  Some twitterers found the news bleak: "This is really depressing but spot-on," wrote @gwachob while others saw it as a call to rally, "Someone needs to stand up for startups!!!" said @chaitters.

And in fifth place (7% of links) was Mashable’s report that Facebook changed its algorithm so that former romantic partners no longer show up in its "Photo Memories" box.

O’Donnell and the Constitution

During a campaign debate in Delaware, Republican Senate candidate Christine O’Donnell asked her Democratic opponent Chris Coons: "Where in the Constitution is separation of church and state?"

Coons responded that O’Donnell’s question "reveals her fundamental misunderstanding of what our constitution is." Bloggers were quick to agree.

"This is embarrassing," wrote Pendulously.

"We have naturalized citizens who have not lived here since birth nor graduated from college or high school who know more about our Constitution that it appears [O’Donnell does]," wrote Jill, a freelance political analyst from Writes Like She Talks.

"Those Tea Partiers who love their Constitution so much might want to learn what it actually says," wrote Steve Greene, a professor of political science at North Carolina State University and self-described liberal, on his blog Fully Myelinated.

"This is what happens when a person is raised by religious fanatics to believe nonsense, and this disturbing ignorance is by no means unique in the modern GOP; in fact, it’s nearly universal" wrote Charles Johnson of Little Green Footballs.

At least one blogger defended O’Donnell.  "I think it’s pretty clear from the part of the exchange I have seen…that she had in mind the argument by some conservatives that the intent of the First Amendment was never to prohibit the insertion of some religious elements into public schools and public life, and that the courts have gone too far in that regard" wrote Neo-Neocon.

Across the country, in Reno, Nevada, Sarah Palin gave a speech to her supporters, telling them that they couldn’t "party like it’s 1773" until conservatives were in the majority in Washington.

A handful of people tweeted her quote (including Markos Moulitsas of the liberal Daily Kos), making fun of Palin’s use of the year 1773. Conservative-leaning blogs picked up on this; agitated that "intellectually superior leftists" (in conservative pundit Michelle Malkin’s words) were unaware that the Boston Tea Party occurred in 1773.

"The problem is, as everyone with a fifth-grade level of historical literacy knows, that 1773 was the year of the Boston Tea Party," scolded Atomic Nerds.

"The lesson we can learn from libs," explained Van Helsing at Moonbattery, "Don’t sneer until after you’ve figured out what you’re talking about."

There were a few liberal bloggers who opined on the backlash that came from the conservative blogosphere.

"And if we are going back to 1773, does that mean Russia gets Alaska back?" joked Jamie at Intoxination, "Hey – at least Sarah Palin could truthfully say she ‘can see Russia from her house.’"

The most popular news video on YouTube last week, with more than two million views, was purported footage of UFOs over Manhattan.  Later in the week, there were reported sightings of similar lights in the night sky in both El Paso, Texas and Phoenix, Arizona.

The second most-viewed video on YouTube, also with more than two million views, was a speech from openly gay Fort Worth City, Texas Councilman Joel Burns. In the speech, Burns spoke of the challenges he faced growing up gay, but then explained how his life eventually improved, imploring LBGT youth to resist suicide.

"Give yourself a chance to see how much life will get better," pleads Burns in the video, fighting his way through tears.

The third most-viewed video on YouTube last week was a set of several clips from the New York state gubernatorial debate in which fringe candidate Jimmy McMillan of the Rent is Too Damn High party rants that…rent is too damn high.

A special thanks to Vadim Nikitin for his translation assistance.