A midterm election cycle quickly becoming known for harsh rhetoric and sharp personal attacks once again finished as the No. 1 story last week. But it had to share the media spotlight with a live dramatic rescue that became the ultimate reality show.

For the week of October 11-17, the 2010 campaign accounted for 28% of the newshole, according to the Pew Research Center’s Project for Excellence in Journalism. That is up slightly from the previous week (25%) and marks the fifth consecutive week in which the election has been the No. 1 subject, confirming its dominance as the fall’s top news story.

Last week, the news was driven by several crucial debates among Senate candidates—including Christine O’Donnell versus Chris Coons in Delaware and Sharron Angle versus Harry Reid in Nevada. New York gubernatorial candidate Carl Paladino generated headlines with disparaging remarks about homosexuals, and an underlying theme of the coverage last week was that the 2010 campaign has been distinguished by a particularly pungent brand of politics.

The week’s No. 2 story (filling 21% of the newshole) was the rescue of 33 Chilean miners who had been trapped underground for 69 days. The res

cue proved to be one of the rare mega-stories that offered nothing but good news, and it was viewed live around the world. In the U.S., the story filled one-third of the airtime studied on cable news for the week.

The third-biggest story was the economy (12%), which last week focused on the housing crisis and particularly on charges of fraudulent foreclosure practices. One key element of the narrative was the news that the 50 state attorneys general were opening an investigation into those allegations.

The No. 4 story was the conflict in Afghanistan (4%) with something of a twist. There was coverage of more violence on the ground, but the news also broke that the U.S. was allowing Taliban officials to travel to Kabul to participate in talks with the Karzai government—a development treated in the media as a faint glimmer of hope.

And with a federal judge ordering the Pentagon to halt its current “Don’t Ask Don’t Tell” policy, the issue of gays in the military registered as the fifth-biggest story, filling 3% of the newshole.

Now securely the No. 1 subject in the news for more than a month, the 2010 elections were the No. 1 story in three media sectors last week—newspapers (28%) and the two sectors that include the ideological talk shows, cable (36%) and radio (39%).

A leading figure in that coverage was New York gubernatorial candidate Carl Paladino, who registered as a lead newsmaker in 10% of all campaign stories. (To qualify as a lead newsmaker, someone must be featured in at least 50% of a story.) The outspoken Paladino has displayed a knack for making news, which inc 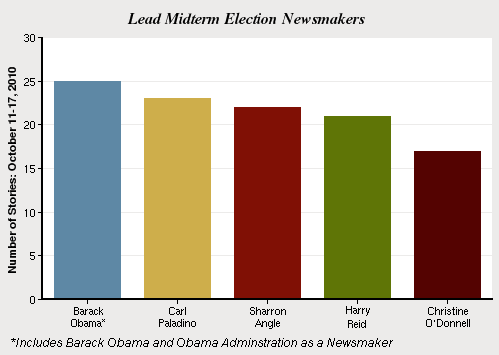 luded a face-to-face confrontation with a New York Post reporter.

Last week, he triggered a controversy by declaring, at a New York synagogue that “I don’t want [children] to be brainwashed into thinking that homosexuality is an equally valid or successful option” as heterosexuality.

In an October 11 report on ABC, anchor Diane Sawyer declared: “Republican Carl Paladino…a tea party favorite…is now taking on the gay community.” In an interview on the network, former New York Mayor Ed Koch added that “this campaign has sunk to the lowest level in the last 50 years.”

Several debates that generated attention last week also were distinguished by their nasty tone. The California gubernatorial race between Democrat Jerry Brown and Republican Meg Whitman has already produced controversies over Whitman’s use of an undocumented housekeeper and an overheard conversation in which someone on Brown’s campaign described Whitman as a “whore.”

An Associated Press story reported that in their third debate last week, the two “resorted to many of the personal attacks that have dominated the last few weeks of the campaign,” with Brown accusing Whitman of trying to enrich her wealthy friends and Whitman calling Brown a careerist old-style pol.

Another debate that got plenty of attention, and was televised by CNN, featured tea party candidate Christine O’Donnell and Democrat Chris Coons vying for the Delaware senate seat. One clip of that faceoff, shown on MSNBC’s Hardball program, included sparring over O’Donnell’s controversial comments of a decade ago on Bill Maher’s Politically Incorrect show and allegations of a socialist influence in Coons’ background.

One much-anticipated debate last week featured Sharron Angle, the tea party-backed Republican hopeful and Senate Majority Leader Harry Reid. The tightness of that race was illustrated by several polls. One showed Angle up by two points, while the other had Reid winning by three.

While that debate may not have produced many notable moments, one that reverberated throughout the media landscape was an Angle remark that seemed to suggest weakness on her opponent’s part. In the midst of a discussion of Social Security, Angle snapped, “Man up, Harry Reid.”

The happy ending to the Chilean mine cave-in was the No. 1 subject in two sectors last week, online news (19% of the newshole) and network news (27%).  It also accounted for 33% of the airtime studied on cable news, where millions of Americans watched the men being freed from their lengthy underground confinement.

And on the day of the rescue, October 13, that event dominated the media, accounting for almost half (46%) of all the coverage studied by PEJ and filling more than 60% of the airtime on cable and network news.

Anchoring CNN’s live coverage of the miners’ lengthy journey back up to the surface, John King called the effort “methodical but magical.” Scenes of men returning to teary-eyed loved ones were commonplace and the emotional impact on viewers was undeniable.

“It was like a moon landing or the Super Bowl or the most gripping reality TV show you’ve ever seen,” concluded an October 14 USA Today story. “The rescue of 33 miners from what had seemed like their tomb below the Chilean desert was the culmination of a mythic tale of death and resurrection that briefly unified the world in awed delight.”

Once the men were returned, details about their lives below began to emerge. An October 15 story posted on FoxNews.com reported that Luis Urzua, “who was foreman at the San Jose mine quickly imposed his authority after the cave-in on Aug. 5 left the men trapped deep underground. A topographer by training, Don Lucho—as his men called him—mapped out the area where they were trapped, sorted the men into three eight-hour shifts and organized the rationing of food—two spoonfuls of tuna and half glass of milk every 48 hours. “

The story also noted that the miners voted on their underground decisions and that they only joked about the idea of cannibalism after they returned home.

At 12% of the newshole, the troubled economy was the No. 3 story last week generating the most attention in the online sector (17%) and on newspaper front pages (15%).  In the past month, the level of economy coverage has been very consistent, ranging from 9% to 13% of the newshole. Last week, the top storyline was related to allegations that some loan foreclosures were processed without a proper review of the documents.

The war in Afghanistan accounted for 4% of the newshole last week, down slightly from 5% the week before. The media treated the news that U.S. was helping facilitate negotiations between the Taliban and Afghan government as a mildly hopeful sign, but also as a first tentative step down a long, hard road.

And for the second time in a month, the subject of gays in the military finished among the top five stories. A judge’s ruling that the military must end enforcement of the “Don’t Ask, Don’t Tell” policy, and the Pentagon’s subsequent suspension of the policy, accounted for 3% of the newshole.  The DADT policy was the No. 3 story (at 4%) the week of Sept. 20-26 when Senate Republicans blocked a repeal effort. 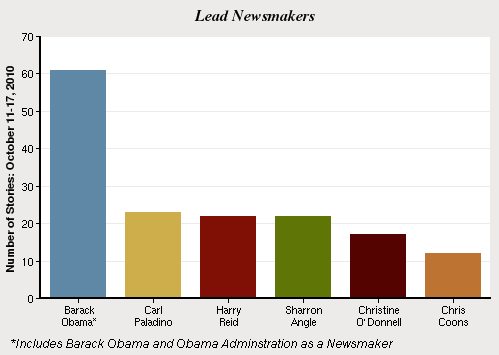 As someone who also figured prominently in election coverage last week, President Obama was the No. 1 newsmaker from October 11-17,  registering as a lead newsmaker in 6% of all the stories studied by PEJ. That’s up slightly from 5% the previous week.

And in another sign of the campaign’s dominance, the week’s top five newsmakers were all midterm election figures. Carl Paladino was No. 2, registering in 2% of all stories studied. He was followed closely by Nevada senate hopeful Sharron Angle (2%) and her opponent, Majority Leader Harry Reid (2%)

The No. five newsmaker was another candidate who hasn’t had much troubled getting the media’s attention lately—Delaware GOP candidate Christine O’Donnell, also at 2%.