Even without major new developments to report, the 2010 midterms dominated last week’s news—another indication that the crucial elections are likely to drive coverage for the next month.

From October 4-10, the elections accounted for 25% of the newshole, according to the Pew Research Center’s Project for Excellence in Journalism. That was down just slightly from the week before, when the subject made up 26%.

Last week marked the fourth straight one in which the elections registered as the top story. And from September 13 to October 10, the subject has accounted for 27% of the newshole—easily outdistancing the No. 2 story in that period, the economy, at 12%. That amount of attention has been fairly consistent, whether there was a tight primary contest  being decided—such as Delaware’s GOP Senate race—or, as was the case this past week, candidates trading barbs and accusations in the long march to November.

Coverage of the midterms more than doubled that of the next biggest story—the ailing U.S. economy. Last week, the focus of the economic news was less about underwater homeowners than about the banks that were doing the paperwork. Scrutiny of questionable foreclosure practices helped make the economy No. 2 for the week, with 11% of the coverage.

The ninth anniversary of the U.S. involvement in the war in Afghanistan lifted that conflict to the No. 3 spot last week (5%). Sober reflections on the years of war were coupled with fresh reports of NATO casualties.

It was also the week that Nobel prizes were announced. The media chose to focus especially on two of the recipients—British scientist Robert Edwards, an in vitro fertilization pioneer, and the Chinese dissident Liu Xiaobo. Coverage of the awards and the honorees accounted for 4% of the week’s news.

Finally, continued coverage of the somewhat vague intelligence warning that U.S. tourists should be careful when traveling in Europe—because of fears of a terrorist attack—rounded out the top five stories of the week. Coverage of this and the broader war on terror occupied 4% of the newshole.

The Midterms Story—Here to Stay

Even though they did not really heat up until the spring, the midterm elections now constitute the third-biggest story of the year to date (8%) and are closing in on the No. 2 story (the Gulf oil disaster at 9%.). The economy remains the No. 1 story of 2010, at 12%.

In another sign of the staying power of the campaign story, the midterms were the No. 1 story in all but one media sector last week. And they dominated the cable and radio talk shows, accounting for 63% of the airtime studied. The elections made up 51% of the overall cable coverage, 21% of the coverage in radio, 19% of network news airtime, and 18% of newspaper front page coverage.  Online news websites were the only sector to devote more coverage to the economy than the campaign, although both subjects registered at 13% of the newshole.

Last week, there were no truly dramatic events propelling the coverage as the media spent considerable time following—and analyzing—the tactical dimensions of campaigns around the country.

Several races seemed to draw special attention. In the New York gubernatorial contest, tea party favorite Carl Paladino and Democrat Andrew Cuomo continued to duke it out. (After an exchange of words between Paladino and a New York Post reporter, Fox News Channel host Bill O’Reilly invited Paladino onto his program to give his side of the story).

In California, Attorney General Jerry Brown (D) got into trouble over an incident in which someone in the Brown campaign was overheard describing his Republican opponent Meg Whitman, a former eBay CEO, as a “whore”—a reference to that campaign’s charge that she supposedly made a “secret deal” with the police unions to preserve their pensions in exchange for endorsements. Whitman called the accusation a slur.

News outlets also followed the high-profile Connecticut senate contest between Republican Linda McMahon and Democrat Richard Blumenthal, who debated twice last week. And the three-way race in Florida between Republican Marco Rubio, Democrat Kendrick Meek, and Independent Governor Charlie Crist generated some media interest. There, the candidates continued on the attack, portraying each other as an extreme choice for voters (Rubio, who has the backing of the tea party, is the favorite in that race).

In his October 5 radio broadcast, conservative talk host Sean Hannity declared: “It’s getting ugly out there all across the board, I gotta tell you.” Hannity singled out Crist for his attacks on Rubio over Social Security, suggesting that the governor was trying to scare seniors.

Delaware Republican candidate Christine O’Donnell, also backed by the tea party, continued to make headlines as analysts discussed the controversial statements that have dotted her record. On MSNBC daytime programming, anchor Tamron Hall posed a question about her ability to present a better image to voters: “We know what happened in 1999 [referring to her dabbling in witchcraft], and now she’s got pearls, soft music in the background, and she says ‘I’m just like you. I’m you.’ Does that work?” 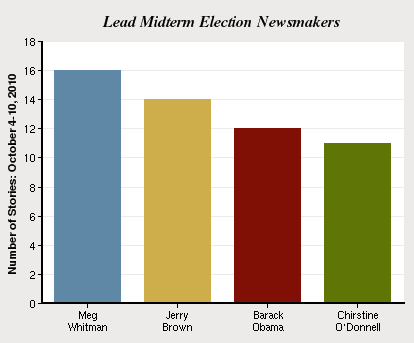 A look at the leading newsmakers in the election coverage helps to illustrate the media’s focus last week. Out of the top 10 election newsmakers, four are tea party-backed candidates. These included O’Donnell (a lead newsmaker in 6% of all campaign stories studied), Paladino (4%), Nevada Republican Senate candidate Sharron Angle (4%), and Alaska Republican Senate candidate Joe Miller (3%). (To be a lead newsmaker, someone must be featured in at least 50% of a story).

News about the economy, particularly questionable banking practices related to foreclosures, represented the No. 2 story for the week, at 11% of the newshole. That was up modestly from 9% the week before.

A September jobs report (the unemployment rate held steady at 9.6%) and also the California state budget crisis accounted for some of the economic news last week. But the housing crisis made the biggest splash with further revelations about dubious foreclosure practices by banks. The Bank of America halted its foreclosure sales in all 50 states on October 8 and one day later, the Washington Post reported that “Senior Obama administration officials said Friday that a nationwide moratorium on foreclosure sales may be inevitable.”

Last week also marked nine years of war in Afghanistan, and the news media used the opportunity to assess the state of the conflict thus far. Coverage of this war filled 5% of the newshole, making it the No. 3 story of the week.

The October 7 broadcast of ABC’s World News Tonight featured a segment that attempted to provide some perspective on the longevity of the conflict. Anchor Diane Sawyer introduced the report by saying of the soldiers: “We learned that many of them were just kids—elementary school kids—when the war began. And they’re still so young.” The segment also featured interviews with some U.S. soldiers saying where they were when the war began—6th grade, 8th grade, in English class or with their parents at home.

Also last week, at No. 4 (4% of the newshole), were the annual Nobel Prize awards. While there were 11 honorees in total, several drew special attention, in part, for the controversy surrounding their selection. NBC Nightly News was one of the outlets to report that the committee’s choice to honor British biologist Robert Edwards, who pioneered in vitro fertilization, was condemned by the Vatican. And an October 4 New York Times story offered a theory about the delay in giving the honor to Edwards, since the first test tube baby was born in 1978.

“The Swedish committee is believed to avoid controversial people and issues,” the story stated. “The ethical objections to in vitro fertilization may have been one reason for the long delay. Scientists speculated that Dr. Edwards’s political views—he has been a committed socialist—may have been another.”

Another Nobel winner, Chinese dissident Liu Xiaobo, drew coverage when China denounced the award. (Xiaobo will be unlikely to personally accept the award due to his ongoing 11-year imprisonment).

Stories having to do with the war on terror also filled 4% of last week’s newshole. Much of that coverage focused on the U.S. warning to American tourists in Europe advising them to beware of an increased terrorism threat. But with little detail about the nature of the threat, news outlets had little of substance to actually report. 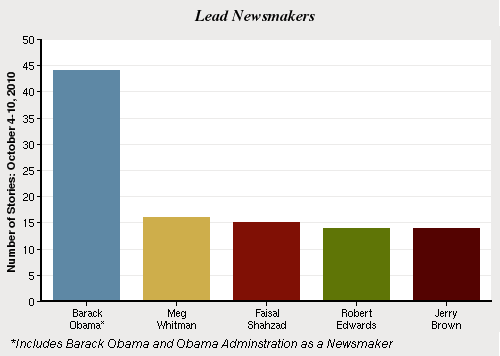 While President Barack Obama remained the top lead newsmaker last week, appearing prominently in 5% of all the stories studied, that was down from the week before when he was featured in 8%.

The No. 2 newsmaker overall was California Republican gubernatorial candidate Meg Whitman, the focus of 2% of all stories. The contest between her and Democrat Jerry Brown took an ugly turn when someone working for Brown was inadvertently caught on tape characterizing Whitman with a crude term for prostitute. For his part, Brown was tied for the No. 4 newsmaker slot, at 1%.

The third-biggest newsmaker (2%) was Faisal Shahzad, the Pakistani immigrant whose unsuccessful May attempt to detonate a bomb in Times Square earned him a life sentence in prison last week.

The No. 4 newsmaker (1%) was the British biologist Robert Edwards, whose groundbreaking work on in vitro fertilization won him the Nobel Prize in physiology or medicine.