Two potential disasters and an almost forgotten war helped drive the mainstream news agenda in a week in which a number of events vied for the media’s attention.

The top story from August 30-September 5 was Hurricane Earl, which accounted for 13% of the newshole, according to the Pew Research Center’s Project for Excellence in Journalism. The huge storm triggered FEMA warnings, evacuations and at times, near apocalyptic media coverage. But by week’s end, Earl ended more with a whimper than a bang as the East Coast dodged a meteorological bullet.

Another dramatic event that ended far less disastrously than it could have was the No. 5 story. The September 1 hostage situation at Discovery’s Maryland headquarters—an event that played out for an afternoon cable audience—filled 5% of the total newshole. The crisis ended after a few hours when police shot and killed the perpetrator, James Lee. But no one else was injured.

The week’s No. 2 story was the economy, which filled 9% of the newshole, the same level as the previous week. News about the employment situation was the top storyline, with a mixed jobs report that wasn’t as bad as feared, but failed to reverse the gloomy tenor of late.

The third-biggest story (also 9%) was the 2010 mid-term election cycle, which is clearly linked to the fragile economy. It is also a subject that is quickly becoming a staple of the media menu. While coverage was down from the previous week (14%), this marked the fifth straight week that it finished among the top five stories as bad tidings for Democrats and a shaky GOP debate performance helped fuel coverage.

The week’s fourth-biggest story was a new chapter in a war that seems to have gradually slipped from public and media consciousness. With President Obama announcing the end of the U.S. combat mission in Iraq during an August 31 speech, coverage of the conflict filled 8% of the newshole. However temporary, that marks a significant spike in attention to Iraq, which in 2010 has accounted for only 2% of the coverage monitored by PEJ.

In a sign of a busy news week, two stories that might have normally generated more coverage finished outside the roster of top five stories. The re-start of crucial Israeli-Palestinian peace negotiations in Washington was No. 6, at 5% of the newshole. And the fallout from radio and Fox talk host Glenn Beck’s large and controversial August 28 rally at the Lincoln Memorial was next, at 4%.

Two Near Disasters: Hurricane Earl and the Discovery Drama

The path of Hurricane Earl, which roared along the eastern seaboard last week, was the top story in two media sectors. It filled 18% of the online newshole and 24% of coverage studied on network news, the sector that often devotes the most attention to major weather events.

Early in the week, coverage of the storm was both breathless and ominous. On the August 30 ABC evening newscast, anchor Diane Sawyer and weather editor Sam Champion used the term “monster storm” at least three times in the program’s opening minutes as they painted a grim picture of a hurricane threatening the Carolinas, Philadelphia, New York and New England.

A few days later, on September 2, the Washington Post website ran a series of almost four dozen photos showing people preparing for the worst along the East Coast, including evacuations, boarded up properties, and signs declaring: “Don’t Swirl Here Earl.”

But in the end, Earl packed considerably less of a wallop than anticipated. 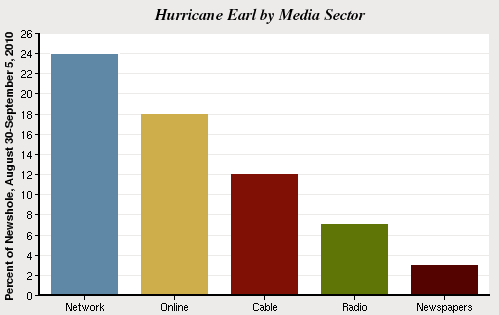 A September 4 story on AOL News declared that “far from the powerful hurricane forecasters and residents feared, Tropical Storm Earl made landfall in Nova Scotia this morning after spoiling weekend beach plans but wreaking less damage than expected in battened-down U.S. towns.” On North Carolina’s Outer Banks “none of the catastrophic damage feared in early forecasts was seen” and in Massachusetts, “there were no reports of injuries, major damage and scarcely even a tree toppled.”

If anything, last week’s coverage proved again that meteorology is tricky and the media walk a fine line between legitimate concern and excessive hype in a story of this type. While Earl clearly posed a significant threat, some of the language and images associated with the coverage heightened an already high level of anxiety.

Another frightening situation unfolded on September 1 with the hostage episode at the Discovery Channel headquarters in Silver Spring, just outside of Washington D.C. On the day that the roughly four-hour incident occurred, the story filled 38% of the cable airtime studied.

For those watching CNN, news of the end of the drama came from Wolf Blitzer on the Situation Room, who reported that, “It looks like this hostage crisis situation in Silver Spring, Maryland has been resolved. We just heard from the Montgomery County police chief, saying that the suspect, James Lee, 43 years old, has been shot…. We also have been told…that the three hostages are safe. They are fine.”

In the aftermath of the event, the story became somewhat more political as some observers labeled Lee an “eco terrorist,” in an apparent effort to link him to liberal environmental views.

A Milestone in Iraq

The conflict in Iraq generated the most coverage last week on network news (18%) as Obama’s speech marked an official end to the U.S. combat role in a war that began more than seven years earlier.

But recently, with the formal end to the U.S. combat role, Iraq has once again been in the news.

Reporting on Obama’s August 31 speech, a Washington Post story stated that he  “declared the U.S. war in Iraq over Tuesday night, telling the nation that he was fulfilling his campaign pledge to stop a war he had opposed from the start…Obama spoke against a backdrop of uncertainty in Iraq over whether the government and its security forces can keep the country from becoming further destabilized."

A September 1 story in the Los Angeles Times reinforced that sense of uncertainty by quoting a number of Iraqis who were fearful of their country’s future and concerned about the decreasing U.S. role.

One such citizen asked, "How can the Americans leave when we don’t have a government, don’t have a state?” Added another: "We thought things were really going to be better when the Americans came, and instead they brought us only sorrow. But if they leave now, there will be no Iraq."

And given the significance, at least symbolically, of the end of the U.S. combat role, last week’s level of coverage was still relatively modest—given that this was a war that once dominated our headlines and foreign policy.

The Economy and Elections

The state of the U.S. economy was the No. 1 story last week in the radio sector, at 17% of the airtime studied. And more than a third of the week’s economic coverage was devoted to the troubling jobs picture as a new report showed the unemployment rate inching up to 9.6%, even as job losses were not as steep as had been expected.

But that did not change a media narrative that has increasingly sounded alarms about the economic recovery. As a Wall Street Journal story stated last week, “Job losses continued to mount in the U.S. economy last month, though at a more modest pace than expected, putting further pressure on policy makers to take action to spur growth and employment.”

The other big domestic story of late, the 2010 midterm election cycle, was the top story last week in the politically oriented cable sector, at 20% of the newshole. A number of developments helped drive that coverage.

There was more evidence of the economy’s impact on the elections in a USA Today/Gallup Poll that found, among other things, that more than 80% of Americans believe we are in a recession and that voters are more inclined to vote for a Republican than a Democrat. That brought more gloomy projections for the Democrats, who “face a political landscape even rockier than those in 1994 and 2006 that ended with election upheavals that changed control of Congress,” USA Today reported.

Some of the news about Republicans highlighted a shaky debate performance by Arizona Governor Jan Brewer that became a widely circulated video clip.  A CBS blog commenting on Brewer’s opening statement, which included some lengthy pauses and several stumbles, called it “cringe-worthy.” 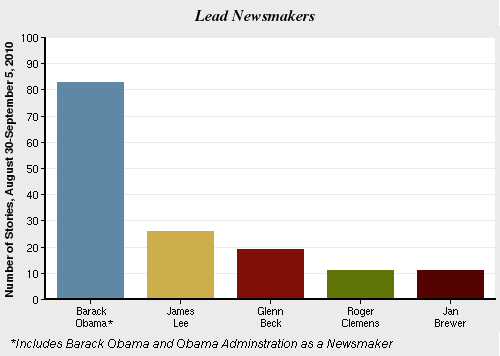 With Obama delivering a significant speech on Iraq last week, the president was a lead newsmaker in 8% of the week’s stories, twice as much as the previous week when he registered in 4%. (To be a lead newsmaker, someone must be featured in at least 50% of a story.)

The week’s other top newsmaker were an eclectic mix of people. No. 2, at 3%, was James Lee, the hostage taker who was eventually killed in the Discovery drama last week. He was followed by Glenn Beck, (2%), the host of the big Washington D.C. rally that was described in many media accounts as more religiously than politically oriented.

The top five list was rounded out by two figures who registered in 1% of the stories. One was former pitching great Roger Clemens, who in a Washington courtroom last week pled not guilty to charges that he lied to Congress when he denied using performance enhancing drugs during his baseball career. The other was Arizona Governor Jan Brewer, who had some rocky moments during her televised debate.

From Tripoli to the East Coast, a Week of Big Events