A volley of primaries put the mid-term elections in the media foreground last week. At the same time, two sobering assessments—one of post-Katrina New Orleans and the other of the nation’s economy—followed close behind in a week where no story clearly dominated the news. And the controversy surrounding the New York Islamic center and a massive egg recall were also among the top stories.

Primary elections in five states—with at least one surprise outcome—made politics and the mid-term elections the No. 1 story for the week of August 23-29, according to the Pew Research Center’s Project for Excellence in Journalism. At 14% of the newshole, it was the second time in three weeks that the mid-terms were the top story in PEJ’s weekly News Coverage Index, which analyzes the media agenda of the mainstream press. Much of the debate centered on the advantages of insider versus outsider candidates, but by the week’s end, pundits were left with a challenge to the conventional wisdom.

Last week was also the five-year anniversary of the arrival of Hurricane Katrina in the Gulf of Mexico, and many media outlets sent personnel to New Orleans to assess the progress of the region’s recovery. The story was No. 2 for the week, accounting for 11% of the newshole studied.

The third-biggest story of the week was the state of the U.S. economy. Last week, a series of dismal economic reports seemed to confirm worries that the recovery had slowed to nearly a halt. Coverage of these, the reaction of the stock market, and the Federal Reserve chief’s speech signaling that the Fed was prepared to act to stimulate the economy if necessary, made up another 9% of the newshole studied.

Coverage of the proposed Islamic Center near the World Trade Center site in New York, the lead story two weeks ago, dropped to No. 4 (from 15% of the newshole to 6%), but the story did not disappear.

A nationwide recall of more than 500 million eggs due to fears over salmonella contamination rounded out the top five stories of the week. The media devoted 4% of the newshole to reporting on the recall, tracing the implications for public health and the impact on business.

Voters Go to the Polls

While the media generally focused intently on the primaries last week and their implications for the mid-term elections in November, none were as focused on the subject as cable and talk radio, sectors that are often given to political fervor.

On cable, nearly a quarter of the airtime studied—24%—dealt with the races, their outcomes and what they foretold. On radio, the number was smaller, 16%, but when straight-news radio programming is removed, the number was much higher. 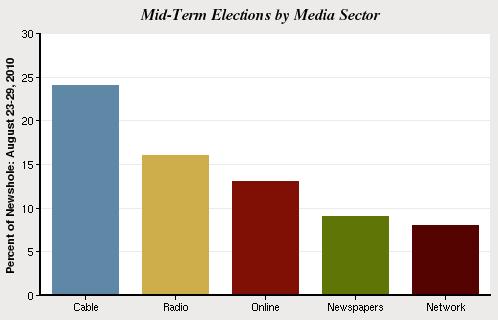 In other media, the story got less attention. On newspaper front pages, for instance, the story was No. 2, filling 9% of the newshole, while among the top five stories on the most popular news websites it was also No. 2, at 13%. On network TV, the story peaked at only No. 5 (8%). The networks were more heavily focused on the economy and Katrina remembrances.

Much of the week’s election coverage centered around the GOP primary votes that occurred in Alaska, Arizona, Florida, Oklahoma and Vermont.

From the outset, the races were framed almost as a David and Goliath contest: “It’s the political establishment vs. the outsiders in Tuesday’s primaries,” read an Associated Press article from August 24, “and the establishment has the better odds.”

Closely watched was the Republican senatorial primary race in Alaska between a Sarah Palin-backed Tea Party favorite Joe Miller and his well-known opponent Senator Lisa Murkowski. It was not only viewed as a test of the Tea Party movement but of its champion Sarah Palin in particular. “Republican Joe Miller’s upstart primary bid against Ms. Murkowski looked like a long shot, but it didn’t scare away Ms. Palin,” said the same AP story.

In the end, the primary results were a mix. The Alaska race was deadlocked. An outsider won in Florida, but analysts noted that looking across all races this primary season incumbent candidates almost always had won. At least some media, particularly in the talk world, took from the results what they wanted to see.

Rush Limbaugh, for instance, on August 25 saw Tea Party triumph and a reason to further attack what he calls the drive-by media: “Sarah Palin has had at least 11 of the candidates she endorsed go on to win—often against very long odds—and don’t forget, ‘cause the drive-bys are out there saying that Palin’s lost her power.”

From the left, MSNBC’s Rachel Maddow made a point of not prognosticating based on the previous day’s results. “We are not going to address the question of what last night’s results tell us about the influence of the Tea Party movement. We are not going to weigh whether anti-incumbent is in fact sweeping the nation… and at least for the moment, we are not going to look at what this will all mean when the votes are eventually counted 69 nights from now in the big enchilada.”

One incumbent victory over a political outsider received a large portion of the GOP primary coverage, and that was Arizona Senator John McCain’s win over J.D. Hayworth. McCain outspent his opponent dramatically and won by a substantial margin. But Limbaugh pointed out, “let’s not forget that one of the candidates that Palin endorsed was McCain.”

Five years after Hurricane Katrina touched down in the Gulf Coast, it was in the news again as media outlets took stock of recovery and rebuilding efforts. While much of the news was grim, there were occasional portrayals of a hopeful situation.

Anderson Cooper, one of the anchors who spent the week in New Orleans, summarized the situation this way on the August 25 CNN prime-time program: “Crime is still a major problem, yes, and many city-owned properties are still in ruins, but there is new life here. Local restaurants are rebounding, tourists are coming, and the schools here are improving. A lot of people are working very, very hard. Human spirit here is something they’ve never been short of.”

At No. 3, coverage of the U.S. economy was fueled by bleak new housing numbers, a weak gross domestic product rate, and a restrained speech by Fed chief Ben Bernanke.

New York Times’ Peter Goodman assessed the situation in an August 28 analysis. “Despite an aggressive regimen of treatments from the conventional to the exotic—more than $800 billion in federal spending, and trillions of dollars worth of credit from the Federal Reserve—fears of a second recession are growing, along with worries that the country may face several more years of lean prospects.” Faced with dwindling policy options, “The situation has left American fortunes pinned to an uncertain remedy: hoping that things somehow get better.”

The previous week’s top story—the debate over a proposed Islamic center a few blocks from the site of the World Trade Center—fell to No. 4 story, about a third of the amount one week before. No major developments appeared as the story diffused. There was little left to report other than the lingering protests, outcries and pundit reactions.

Finally, at No. 5 (4%), was a massive recall of eggs, due to salmonella, from two major American farms. A cause of the salmonella, which triggered the August 13 recall of hundreds of millions of eggs, still has not been determined. 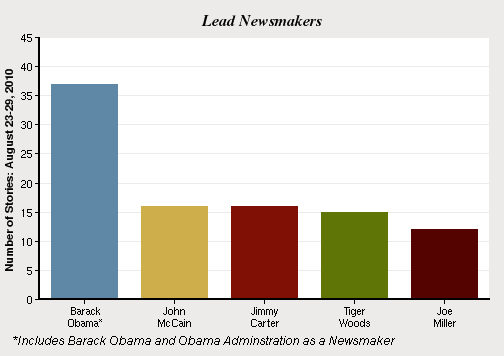 President Barack Obama remained atop the list of newsmakers last week, appearing as a main focus of 4% of all stories, but that was down from 10% when he fueled the Mosque controversy with remarks he made at a White House dinner. (To be a lead newsmaker, someone must be featured in at least 50% of a story.)

He was followed by two individuals who were featured in an equal amount of stories. One was former President Jimmy Carter (2%), who made the news after he secured the release of an American prisoner from North Korea.

The other was Arizona Senator John McCain, also at 2%, who won handily in his Senate primary race against J.D. Hayworth. McCain was the No. 1 newsmaker in stories just about the mid-term elections, where he was featured in 12% of stories.

Pro golfer Tiger Woods was the No. 4 newsmaker of the week, at 1% of all stories. Woods’ and Elin Nordegren’s divorce papers were finally signed, after which a People Magazine interview with Nordegren appeared.

Also at 1% was Joe Miller, the proclaimed underdog in the Alaska Republican senate primary race against Lisa Murkowski. The media clung to the story once it appeared that the election would be too close to call.