A week that began with an old-media stalwart prompting a policy debate with an in-depth investigation ended with a vivid illustration of the perils of the rapid-fire nature of modern cable and the edges of internet news.

But even with that, the economy nevertheless dominated the week’s news, edging out the Washington Post’s two-year investigation of America’s intelligence-gathering apparatus and the firing of an Agriculture Department employee named Shirley Sherrod.

Economic news accounted for 17% of the newshole from July 19-25, its highest level in nearly three months, according to the Pew Research Center’s Project for Excellence in Journalism. Driving the story last week were partisan debates over a pair of Washington-centric items: the merits of extending unemployment insurance benefits and Wall Street regulatory reform.

The No. 2 story of the week was the forced resignation of Sherrod after a conservative activist posted clips of a speech she gave to the NAACP in March. The story, which garnered 14% of the newshole, was picked up by a few cable talk shows but quickly mushroomed when it was revealed that the brief clips distorted the meaning of her remarks. That is the subject a special reconstruction by PEJ this week, which traces the arc of the story point by point and explains the questions raised by the incident.

At No. 3, filling 12% of the newshole studied, the spill in the Gulf of Mexico remained a major story, but the media’s attention also appeared to be ebbing as the flow of oil spilling out appeared to be under control. Coverage early in the week was dominated by technical issues involving a containment cap that had succeeded, for now, in stopping the leak. As the week went on, a tropical storm forced repair and clean-up ships to temporarily abandon the site.

The series in the Washington Post series, entitled “Top Secret America,” was the result of a two-year investigation by the newspaper. The series documented the rapid growth in private contractors as the government’s counter-terrorism efforts since 9/11 increased and raised questions about whether the sheer size and decentralization of the intelligence-gathering bureaucracy hampers its effectiveness. Coverage of the series and homeland security was the fourth-biggest story of the week and accounted for 7% of the newshole.

News related to November’s elections – and the prospects for Republican gains – was the fifth biggest story of the week with 4% of the newshole.

With several economic stories emanating from Washington during the week, the topic topped the overall newshole as well as that of four of the five media sectors: newspapers (19%), radio (24%), online and network TV (17% for both).

Economic news has proven the biggest story so far this year (with 12% of the newshole since January), and many of its peaks have come when the issue found its way to Washington. Last week’s 17% (up from 14% the week before) represented the highest level since the week of April 26-May 2 when Goldman Sachs executives were pilloried by a Congressional committee.

A debate over how to pay for unemployment checks for millions of Americans drove the coverage last week. Republicans demanded that the cost be covered by cuts elsewhere in the budget. The matter wasn’t settled in the Senate until Carte Goodwin, the replacement for the late West Virginia Senator Robert Byrd, was sworn in and gave Democrats enough votes to cut off debate and pass the measure along to the House of Representatives.

Much of the media saw the debate in the context of politics, rather than economics. The New York Times, for example, concluded a July 20 web story on the Senate’s passage of the measure with this observation: “Both parties expect the fight over the unemployment extension to figure in midterm election campaigns in the fall. Republicans say they believe their stand will strengthen them with voters worried about the rising deficit. Democrats will criticize Republicans’ willingness to set aside deficit concerns when they pushed through tax cuts for the affluent, but not when unemployment pay for ordinary workers was at stake.”

By the time the president signed the long-debated Wall Street reform bill last week, the story had lost much of the rancor that had propelled it in previous weeks. The signing merited, for instance, just a brief “tell story” narration by ABC World News anchor Diane Sawyer July 21: “President Obama signed into law the most sweeping overhaul of financial regulations since the Great Depression. We’ve told you a lot about it in recent days but today was a legislative victory for the president who vowed to tighten restrictions on banks after the financial system nearly collapsed two years ago.” 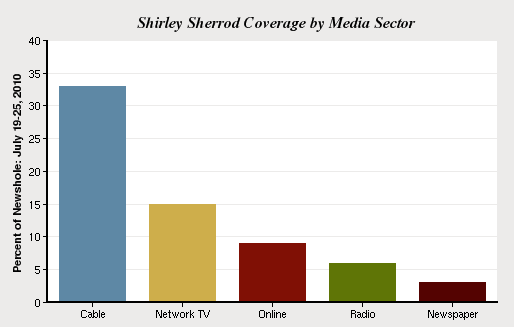 The racially charged resignation of Shirley Sherrod from the Agriculture Department, while coming in at No. 2 overall last week with 14% of the newshole, dominated cable news. The story accounted for 33% of the airtime studied, twice as much as the second-biggest story for the sector, the oil spill. During the last half of the week, from July 21-July 25, the story consumed 41% of the cable airtime, quickly overtaking developments in the oil rig disaster and a well-orchestrated rollout of the Washington Post’s series on the nation’s intelligence-gathering bureaucracy.

The treatment of Sherrod touched off much soul searching among the media, as well as finger-pointing, when it was revealed that the clips posted online by a conservative activist had been edited in a way that obscured the actual meaning of her talk. (Click here to read PEJ special report, a chronology of how it spread through the media.)

Before the full context of the clips emerged, Fox talk show host Sean Hannity cited the story as another example of the power of new media (the clips were obtained and first aired on the conservative website, BigGovernment.com). Left-leaning hosts, such as MSNBC’s Rachel Maddow, later jumped on the incident as an example of conservative news outlets rushing to report news disparaging of liberals before checking the facts. She also excoriated the Obama administration for demanding Sherrod’s resignation before investigating, and asserted it was a reflection of the administration’s skittishness on discussing race (click here to read more on coverage of race during Obama’s first year as president).

With 12% of the overall newshole, the gulf oil spill remains a major story. But it has fallen far from the peak of 44% it hit June 14-20, a week in which the president addressed the topic in a speech from the oval office and oil industry executives appeared before Congress.

With its fast-changing developments and visual elements, the story has been especially prominent on television. Last week, the spill accounted for 13% of the airtime on the cable programs in PEJ’s sample, and 16% of network news airtime. It garnered 9% in newspapers, and 12% both online and on radio.

About 45% of the oil spill stories concerned the efforts to stop the leak and clean up the oil. Another quarter related to Tropical Storm Bonnie forcing a temporary evacuation of the site.

Despite the emergence in the scientific consensus last week that the containment cap was holding and the well had been tamed, the coverage was far from celebratory. Many of the stories focused on oil pressure and the relative merits of various ways of sealing the well for good, with names such as topkill, static kill and bullheading.

Good Morning America’s July 20 report captured the technical nature of many of the stories. An expert brought into the studio to discuss the latest developments, City University of New York physics professor Michio Kaku, said “I think we should stay with plan A for the time being. Pressures are low, which could indicate a leak…I think we should keep the cap in place and keep our fingers crossed that the pressure doesn’t drop any further. A sudden drop means a heart attack, a crack in the pipe.”

In what some may consider a sign of the times, the Washington Post began its series on intelligence gathering on Monday, July 19. The paper explained that this was done, in part, to take advantage of higher weekday web traffic. Newspapers have traditionally showcased ambitious projects on Sundays to take advantage of peak circulation of the printed paper.

The story demonstrated the power of resource-rich traditional media to still set the agenda with deeply reported pieces. The topic of homeland security accounted for 7% of the newshole during the week – virtually all of it related to the Washington Post series – and represented the fourth-most covered storyline. The series took nearly two years to produce and touched off a debate across media sectors about the adequacy of the nation’s counter-terrorism efforts. As a result, homeland security was a top story last week in newspapers (No. 2), on the network news programs and online news outlets (No. 4 for both) and cable news (No.7).

Rounding out the top five stories for the week was coverage of the 2010 elections (4%). No one topic dominated the coverage, but the prospects of Republican gains, especially in the House of Representatives, was the subject of many stories. One theme that emerged from some of the analysis was why Obama was not getting more support from liberals because of his legislative successes. 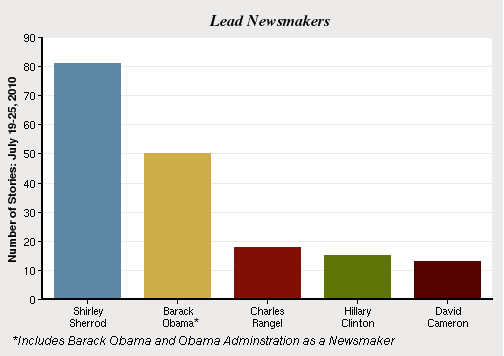 Shirley Sherrod, the woman forced to resign her job at the Agriculture Department, was the top newsmaker of the week, topping even the President who almost always leads the list. She led in 8% of the stories (To register as a lead newsmaker, a figure must appear in at least 50% of that story.) That was well above the percent of stories in which Obama and his administration led (5%). New York Rep. Charles Rangel was No. 3, at 2% of the stories. A House panel concluded that he broke ethnics rules and announced that the charges would be the subject of a rare Congressional trial. Secretary of State Hillary Clinton was No. 4, also with 2%, after she exchanged sharp words with North Korea during a visit to South Korea. British Prime Minister David Cameron was the No. 5 newsmaker, leading in 1% of the stories. He met with Obama in Washington last week.

With the Election Over, the Economy Tops the News