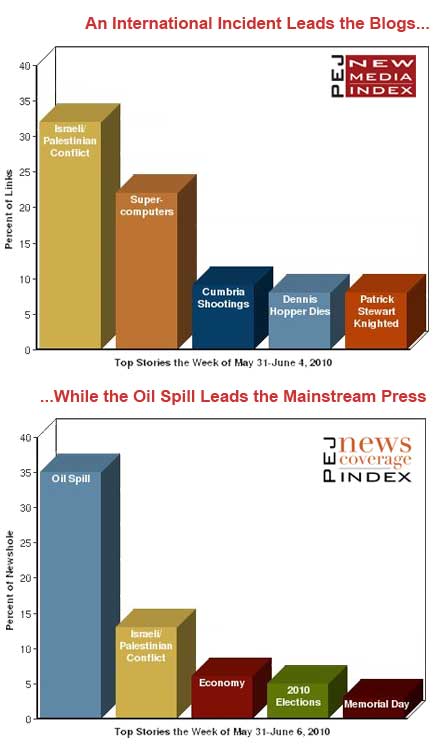 The May 31 clash in which Israeli soldiers killed nine people on a Turkish ship carrying supplies to the Gaza Strip triggered a passionate blogosphere response focused largely on who was to blame.

For the week of May 31-June 4, nearly a third (32%) of the news links on blogs were about this latest outbreak of Mideast violence, according to the New Media Index from the Pew Research Center’s Project for Excellence in Journalism.

In a debate that reflected the passions surrounding the Israeli-Palestinian conflict, a majority of bloggers expressed outrage over Israel’s actions, saying it had improperly attacked a peaceful aid ship in international waters. A vocal minority, however, defended Israel, declaring that the country acted in legitimate self-defense.

Indeed, three out of the five most-viewed news videos on YouTube last week were scenes of the violence aboard the ship, Mavi Marmara, provided by the Israeli Defense Forces in an effort to defend their actions.

That story also generated significant attention in the mainstream press last week, although not to the extent that it did on blogs. It was the second-largest story of the week filling 13% of the media newshole, behind only news about the oil spill along the Gulf coast.

The second-largest story on blogs last week, at 22%, was an interactive graphic on BBC’s website highlighting the world’s 500 fastest supercomputers. The web page included illustrations of the list produced by a project called TOP500. Many tech-focused bloggers shared their observations gleaned from the graphic such as which operating systems were most common.

The No. 3 subject, at 9%, was the shooting rampage by a self-employed taxi driver in Cumbria, England, which killed 12 people and injured 25.

The next two stories (tied at 8%) both involved famous actors. One was the passing of Dennis Hopper, best known for his role in the landmark 1969 counter culture film “Easy Rider.” The other was the knighting of Sir Patrick Stewart at Buckingham Palace where he paid tribute to an English teacher who first encouraged him to perform. Stewart’s most prominent role may have been as Captain Picard in the TV series “Star Trek: The Next Generation.”

Although technology-related subjects frequently dominate the top stories on Twitter, last week was different. With the World Cup looming, the No. 1 topic was European soccer, at 13% of the week’s links. (That marked only the seventh time in 2010 that a non-tech topic finished first.)

Two separate BBC stories accounted for the soccer coverage. One was a report that a wealthy group of investors known as the Red Knights had temporarily deferred plans to bid on the powerhouse team Manchester United. The other was an announcement that Rafael Benitez was leaving as manager of Liverpool by mutual consent.

Two stories about AT&T made up the second-largest subject at 12%. One was a Wired report about a customer who was met with a legal threat after emailing the company’s CEO. The other was a CNET story about AT&T’s new set of data pricing plans for mobile devices such as iPhones and iPads. 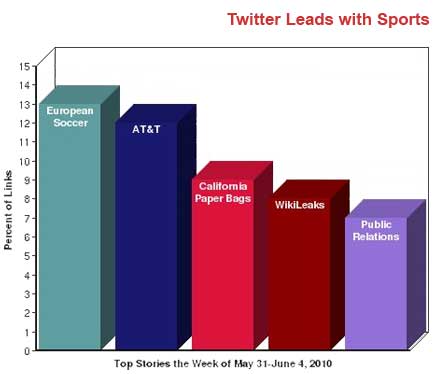 A bill passed by the California Assembly to charge customers for using store-issued paper bags at grocery stores was third at 9%. A story about the creation of the whistle-blowing website WikiLeaks, which exposes government and corporate secrets, was fourth at 8%. And fifth, at 7%, was a report by Britain’s The Independent about companies and public relations professionals who use new forms of communication to reach mass audiences.

In the hours following the May 31 Israeli interdiction of the Gaza-bound ships that ended in violence, a number of bloggers used their sites to chronicle breaking news as it became available.

The blog Liberty Pundits, for example, updated several times during the day. “Israel stops a pro-Palestinian flotilla on its way to support Gaza, with who knows what on board,” reported the blog. Later, the blog added notes such as, “Turks trying to storm the Israel consulate in Turkey,” and “Israel reporting ten dead.”*

Some of the early online commentary focused on how specific media outlets covered the event.

“The New York Times makes no mention of the Israeli soldiers being attacked by the flotilla participants. Despicable,” added Liberty Pundits.

Even as details remained sketchy, bloggers expressed strong opinions as to who was at fault in the incident. Many blamed Israel.

“I am sick and tired of the excuses coming from Israel concerning their reasons for constantly choking off food, water and other resources from the Gaza strip,” added Carrie Cann. “But this just takes the cake.”

“Israel illegally boarding NATO-inspected aid ships in international waters and then shooting unarmed people, who it claims were wielding knives and clubs, is perhaps the perfect analogy for Israel’s continued occupation of Palestine,” argued Faridon Abida at the Black Iris.

“These people [on the flotilla] knew they were going to be boarded. I almost wonder if they carried any aid at all, since they knew carrying any would be a waste of time,” wrote scrubone. “Had they complied with orders, they might still be able to claim a peaceful protest, and their claims that they didn’t fire on the solders might have some weight.”

In an attempt to defend themselves from some of the mounting international criticism, the Israeli Defense Forces released video footage of the incident that they said proves Israeli soldiers were attacked once they tried to board the ship.

The videos, which were immensely popular on YouTube and other places online, became the focus of much of the subsequent debate on the blogs.

“This is not a case of testimony vs. Israel’s account—Israel has video and pictures,” wrote Daled Amos as he criticized the BBC’s coverage of the event. “In fact, only Israel is forced to videotape their operations, because of the inevitable criticisms and accusations. And only Israel finds that visual proof is considered ‘doubtful’.”

The BBC’s interactive graphic representing the list of the world’s 500 fastest supercomputers drew a lot of interest from technology-focused bloggers.

“This may be one of the coolest info­graph­ics we’ve ever seen,” shared Ernie Smith at shortformblog.

Some explained how these supercomputers were relevant to the average person.

“Now most of use are never going to see a super computer, or get to use one, just like most of use are never going to get to drive a Formula One car,” posted Wayne Borean at Through the Looking Glass. “But like with cars, the technology used in super computers will trickle down to the business and consumer markets at some point—In fact it already has.”

Others noted tidbits of information gleaned from the graphic, such as where the computers were located or what operating systems are used.

“Which country has the most powerful supercomputers?” asked Stan Schroeder at Mashable. “If you trust the annual top 500 list…it’s the U.S., followed by China, Germany, United Kingdom and France. The list is voluntary and thus doesn’t include classified supercomputers owned by governments, which means that the real list can be quite different, depending on your favorite conspiracy theory.”

“It is not surprising that Linux is generally preferred in supercomputers but the percentage (91%) is surprising,” observed Ricky Laishram at Techie Buzz.

The most popular news clip (viewed more than 2.5 million times) as well as the No. 5 clip were about an Indonesian toddler who is said to be addicted to nicotine. The ITN News report claims the 2-year-old child smokes 40 cigarettes a day and has become a tourist attraction. His father, who introduced the boy to smoking, asserts that he is in good health.

The ” target=”_blank” rel=”noopener noreferrer”>confrontation on the aid ship bound for Gaza was the subject of the three of the top five most-viewed videos last week. Combined, the three videos were viewed almost 4 million times as YouTube became an integral part of the public relations battle that ensued about the incident.