Six weeks after the explosion of the Deepwater Horizon oil rig, the Gulf disaster generated its highest level of coverage since the story broke, completely dominating the news agenda.

As the drama of devastation, containment and finger-pointing continued to unfold, the mainstream media devoted 38% of its newshole to the spill during the week of May 24-30, according to the Pew Research Center’s Project for Excellence in Journalism. This marks the sixth week in a row the disaster has made the roster of top stories. And last week’s coverage easily exceeded the previous high water mark (20%) during the week of May 3-9.

Moreover, it represents the most attention to any subject since the week of March 22-28, when Congress passed the health care bill and that story filled 45% of the newshole.

Last week the term “top kill” entered the lexicon, as BP tried again—unsuccessfully—to stop the flow of oil from the undersea well. It was also the week when the Obama administration took formal responsibility for mistakes along the way. But even with the president’s press conference as a significant newsmaker, the biggest chunk of the coverage still focused on the growing dimensions of the spill and the sputtering effort to stop the flow of crude into the Gulf of Mexico.

No other story came close to matching the spill coverage. The No. 2 story was the 2010 mid-term elections (10%) with much of the attention focused on revelations about White House efforts to get Pennsylvania Democratic Senate candidate Joe Sestak to back off of a challenge to incumbent Arlen Specter. (Sestak defeated Specter in the May 18 Democratic primary.)

The No. 3 story was the economy, as global jitters revolving around fragile European markets impacted stock values at home. It generated 6% of the week’s coverage.

That was followed closely by the No. 4 story, the ongoing debate about immigration reform. That subject, at 5% of the week’s coverage, was driven by President Obama’s decision to send an additional 1,200 troops to the U.S. border with Mexico.

Finally, at No. 5 for the week (3%) was the continuing fallout from South Korea’s announcement that North Korea had sunk one of its warships, which triggered new tension in the volatile region.

Coverage of the Spill Spikes

The biggest oil spill in U.S. history was again the top story in the news last week. At 38% of all coverage, the spill generated about twice the amount of media attention as the previous week (18%).

The spill saga is also notable for its continuing hold on the media’s sometimes short attention span. The amount of new information, the ups and downs of the unfolding narrative, may partially explain the story’s staying power.

Last week, BP announced it would attempt to mount a “top kill” operation, one of s 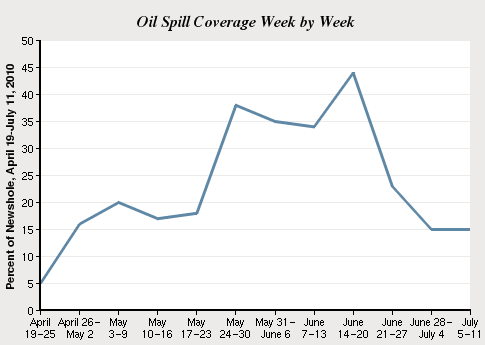 everal highly technical procedures designed to stanch the flow. That procedure, by the end of the week, had failed to produce any lasting effect. Meanwhile, the Obama administration, facing criticism for its handling of the situation, took steps to show it was in charge. The president issued a frank apology for missteps during a May 27 press conference. The next day, he visited the Gulf.

Overall last week, the media continued to focus mostly on unfolding events such as the impact on the environment and the economy, as well as the containment and cleanup of the oil. About half the coverage went to these matters, while about one-third dwelt on the government’s role in managing the crisis and about one-sixth focused on BP’s culpability.

Last week not all media sectors conveyed the same level of interest as the spill proved to be, first and foremost, a TV story.

Broadcast news, which often devotes major coverage to disasters with a strong visual component, focused more attention to the spill than print, online or radio sectors. The broadcast networks devoted fully half—50%—of the airtime studied to the spill last week as viewers were again confronted with the sobering ecological impact of the millions of gallons of spilled crude.

The May 24 CBS Evening News broadcast showed anchor Katie Couric in Grand Isle, Louisiana, discussing  the scope of the damage over images of coated wildlife and polluted coastline. Though Couric rattled off a series of statistics, some uncertainty remained about the true scope of the devastation to date.

“No one knows how much oil has leaked into the Gulf over the past thirty-five days,” she said. “The most conservative estimate is six million gallons. But some scientists believe the spill has already surpassed the eleven million gallons that leaked from the Exxon Valdez in Alaska.”

And on ABC’s Good Morning America, Democratic pundit and Louisiana resident James Carville called for stronger White House involvement, declaring that “…these people are crying, they’re begging for something down here. And, it just looks like he’s not involved in this.”

The cable channels devoted even more of their coverage (57% of the airtime studied) to the story, often homing in on the question of who is to blame.

On the May 24 edition of MSNBC’s Countdown with Keith Olbermann, the liberal host delivered a scathing report, assigning guilt to the Obama administration and especially to BP for the catastrophe.

“BP is not yet capping its oil spill nor its release of toxic oil dispersants, even after the government ordered it to. And the government is not capping, as it promised, flow of new permits for new drilling … No one seems capable of doing one damned thing.”

Right-leaning cable hosts talked about the spill too—though not as much as their liberal counterparts. On May 26, Fox News Channel’s Sean Hannity portrayed the president as a detached leader in a time of crisis, narrating over video of Obama getting some exercise.

“The president wasn’t about to let the biggest environmental disaster in American history keep him off the golf course,” Hannity said. “Now, he hit the links at least twice in the last two weeks alone. And in between golf outings White House pool reports indicate that the president has been working on his basketball game.”

While other sectors of the media did not devote as much coverage to the spill as television, the story was still No. 1 in newspapers (26%), online (26%), and on the radio (32%).

The 2010 midterm congressional elections followed the Gulf  story in a distant No. 2 position, accounting for 10% of the newshole last week. Much of that coverage focused on claims made by Democrat Joe Sestak, winner in the recent Pennsylvania primary against incumbent Arlen Specter, that the White House had offered him a job in exchange for bowing out of the race.

A story published on USAToday.com on May 28 summarized new information about the deal, based on a disclosure by White House Counsel Robert Bauer that Sestak had been offered an unpaid position on an advisory board if he would bow out of the race: “The key question: Was the offer legal? Was it ethical? Was it in keeping with the open, transparent government Obama has pledged to run? Bauer’s answers: yes, yes and yes.”  Across the aisle, some Republicans called for an investigation into the episode.

Once again, foreign economic concerns became domestic worries, as the slumping stock market was the biggest theme in the week’s economic news coverage. Media attention to the lingering economic tremors made it the No. 3 story, at 6% of the week’s news.

The national debate about immigration policy was among the top stories last week. The media devoted 5% of the week’s newshole to that topic, much of it focused on the Obama administration’s decision on May 25 to send 1,200 troops to the Mexican border.

The No. 5 story involved the new fissure in relations between North and South Korea. Though the story had international diplomatic and security ramifications and involved the U.S.—which has nearly 30,000 troops stationed in South Korea—coverage faded quickly as other concerns crowded the media’s agenda. It occupied 3% of the newshole. 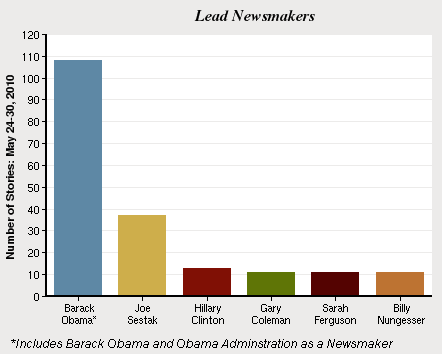 Political figures dominated the news during the week of May 24-30, along with one erstwhile member of the British royalty.

Leading the ranks of the week’s newsmakers was President Obama, who was a lead newsmaker in 11% of all stories. (To be a lead newsmaker, a figure must appear in at least half of a story.) That marks a significant increase over the previous week’s total (5%) as the media closely analyzed the administration’s response to the crisis in the Gulf.

The No. 2 newsmaker (4%) of the week was Joe Sestak, a central figure in the saga of the White House’s role in trying to pre-empt his challenge to Specter.

Secretary of State Hillary Clinton found herself at the center of a challenging diplomatic situation—and among the top newsmakers—when relations between North and South Korea took a precarious turn. The chief diplomat’s visit to China was eclipsed by coverage of her statements about North Korea. Clinton was a lead newsmaker in 1% of all stories last week, making her the No. 3 newsmaker.

Tied as lead newsmakers in the same number of stories last week, at 1%, were Gary Coleman, Sarah Ferguson and Billy Nungesser.

Coleman was the one-time child actor who died of a brain hemorrhage on May 28. He was famous for his role as Arnold in the 1980s sitcom “Diff’rent Strokes.”

Duchess of York Sarah Ferguson made some unwelcome and embarrassing news when she was caught by News of the World in an undercover sting. The former member of British royalty, once married to Prince Andrew, was caught trying to sell access to the prince for £500,000.

Finally, Nungesser, president of Plaquemines Parish in Louisiana, made the news for his vocal advocacy on behalf of the Gulf region, now threatened by oil residue.