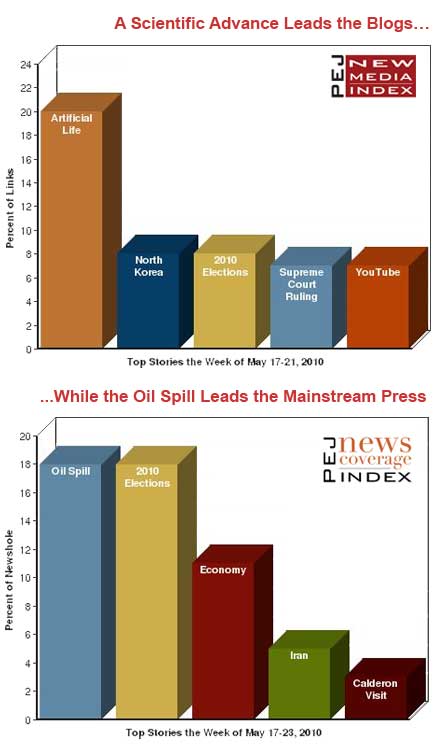 Bloggers often seem more interested in scientific discoveries than the traditional press. And last week, one such scientific achievement led the online conversation despite receiving very little coverage in the mainstream media.

For the week of May 17-21, fully 20% of the news links on blogs were about the American scientists who developed the first living cell to be controlled entirely by synthetic DNA, according to the New Media Index from the Pew Research Center’s Project for Excellence in Journalism.

The nuanced discussion of so-called "artificial life" centered on three major themes: the importance and potential of the breakthrough; whether the act of creating synthetic cells is ethical; and the significance of the achievement in our understanding of God and religion.

The bloggers’ curiosity about science reflects a trend we have seen repeatedly in the New Media Index. A recent study by PEJ that looked at a year’s worth of subjects discussed in the blogosphere found that 10% of the top stories in a given week were about science-far greater than the 1% of the overall newshole devoted to such topics in the traditional press.

The second largest story on blogs, at 8%, was the announcement that South Korea was formally implicating North Korea in the March 26 torpedo attack on one of its warships that killed 46 sailors. Bloggers expressed concern that the action could escalate the decades-old conflict. The growing tension on the Korean Peninsula proved to be a major story on Twitter as well last week, accounting for 7% of the links there.

A Washington Post column by Dana Milbank asserting that recent GOP conventions in Utah and Maine signaled an increasingly radical Republican Party was third, also at 8%. Most bloggers who linked to the piece agreed with Milbank’s criticisms.

That was followed by a Supreme Court ruling (at 7%) that federal officials can indefinitely hold inmates considered "sexually dangerous" even after they complete their sentences. Also at 7% was YouTube’s ascendance to more than two billion hits a day as it reaches its fifth anniversary. 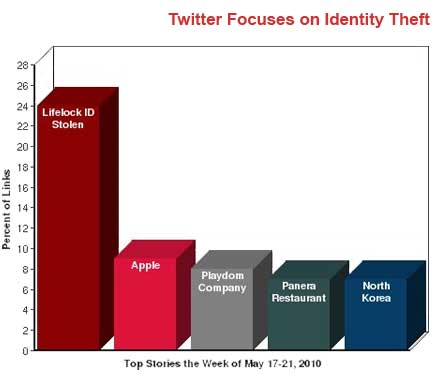 On Twitter, the saga of a corporate ad campaign gone bad overwhelmed all other stories. Nearly a quarter of the links (24%) last week were to a single Wired story about LifeLock, a company that claims to protect its clients from identity theft. According to the report, the CEO of that company had his identity stolen at least 13 times after he prominently included his social security number on many of the company’s ads.

Twitterers found the news ironic, and their messages reflected an anti-corporate sentiment that often permeates the online community.

For the second week in a row, Apple was the second largest subject on Twitter, this time at 9%. Two stories received attention: one about an iPhone enthusiast named Billy Hime who filmed himself getting an Apple logo as a tattoo, and the other that Apple will soon supply a longer-lasting battery with its MacBook computer.

News that the software company Playdom bought popular social game publisher Acclaim Games was third at 8%. An MSNBC story that the Panera Bread Company launched a "pay what you want" nonprofit restaurant in Clayton, Missouri, was fourth at 7%. The BBC report about the escalating hostilities between North and South Korea was fifth, also at 7%.

After reading about the creation of the first living cell to be controlled by synthetic DNA, many bloggers pondered the significance of the advancement.

"This is like the most important scientific news…ever," pronounced Mr. Neil. "And the only thing more astounding than this achievement is that it took me two whole days before I realized that it had happened. What’s wrong with me?"

"This is HUGE," exclaimed Chrystine at Liberated Mind. "This gives scientists the capability to make ANY protien. Some of the possibilties include: Making organs from scratch that fit a person’s individual DNA with the ‘bad’ parts replaced with ‘good’ code; creating a new biofuel that is genetically designed to be as efficient and clean as possible…"*

But as with many scientific discoveries, much of the debate centered on the
ethical implications.

"One can see many potential benefits-and ethical perils-of this advance, including in human medicine," wrote Wesley J. Smith at First Things. "But for now, it seems to me the primary concern is safety and the need to protect the environment. But we had better start thinking about how to regulate the technology. The last thing we need is a synthetic life wild, wild, west."

"Someone, somewhere, somehow will use the fruits of this research and development for selfish, maybe nefarious, gain with possibly deleterious effects on our environment and ourselves," warned XY08’s blog. "There is no way to know the long-term effects of unleashing a created bacterium into the environment, whether intentionally or accidentally. No doubt there will be mutations that the creation creates to sustain itself if that happens."

"There will be Luddites and Primitivists…wringing their hands and wailing and gnashing their teeth about people ‘Playing God,’" predicted The Tarquin at The Blag Switch. "I have news for them. People have been playing God since people were people. Part of human nature is an insatiable curiosity to discover and to create and to engineer our world and our environs to better suit us…But we human beings ‘play God’ because doing so is a natural human behavior. And when we play God, just us squared off against an uncaring world and an apathetic universe, we play to win."

Others saw it as bad news for religious believers.

"The creationists time is over. The theologians have been relegated to historians of mythology," declared Jorma Jyrkkanen. "Man has become God except for the mortal bit… Islam, Christianity, Hinduism, etc etc are undone today by the creation of life. It is science that triumphed over theology."

And some saw the development as proof of the existence of a divine being.

"I have little doubt that humans will probably achieve the capacity to manufacture forms of fully synthetic life…but what will be most fascinating about this synthetic life is that it will have begun as a creation, not as an accident," argued Dennis L Hitzeman at The Worldview Weblog. "Creation testifies to the Creator, even when it is creating its own creations."

On May 18, Wired published an article featuring LifeLock CEO, Todd Davis, who became famous for publishing his social security number as part of the company’s ad campaign. However, the story did not appear for a reason Davis would have wanted. According to reporting done by the Phoenix New Times, Davis’ identity had been stolen at least 13 times.

Almost all of the comments showed that twitterers felt LifeLock deserved what it got for such an ill-conceived marketing campaign.

"#LifeLock’s #CEO has his identity stolen. Thats got to burn after all those commercials," tweeted Ryan Dickerson.

"LifeLock CEO Todd Davis gets what he asked for," added TheBestJams.

"Hilarious," wrote Howard Buddin. "#LifeLock CEO had his ID compromised. That’s what happens when you flaunt your #SSN on TV."

On YouTube last week, the most viewed news video was an unusual minute-long campaign ad for Dale Peterson, a Republican running for the Alabama Agriculture Commission.

The ad, which features the rugged-looking Peterson riding a horse, carrying a gun, and forcefully denouncing his opponents in blunt language, was viewed almost a million times last week.

"I’ll name names and take no prisoners," Peterson promises. "Give me the Republican nomination for ‘Ag Commish’ and let’s show Alabama we mean business!"