As the rig—leased by British Petroleum—continued to leak millions of gallons of oil, the saga accounted for 17% of the newshole from May 10-16, according to the Pew Research Center’s Project for Excellence in Journalism. And in a week in which oil company executives appeared before Congressional hearings, the biggest storyline focused on who was responsible for the disastrous accident.

Since the April 20 explosion of the oil rig that triggered the spill, the story has continued to display strong staying power. While coverage was down modestly from the previous week (20%), this marked the fourth consecutive week the subject was among the top five in the mainstream media, according to PEJ’s News Coverage Index.

The second-biggest story of the week was the nomination of U.S. Solicitor General Elena Kagan to the Supreme Court, at 13% of the newshole. While her nomination generated coverage and commentary, it lagged well behind the attention paid to Obama’s selection of Justice Sonia Sotomayor last year.  Driven by attention to her Latina heritage and the emergence of race as an issue, the Sotomayor nomination filled 24% of the newshole from May 25-31, 2009.

Last week’s No. 3 story was the economy, at 11%. At the start of the week, the focus was on Europe’s move to stabilize Greece’s debt. But coverage shifted to domestic concerns, such as the employment picture, as the week went along.

Despite several attempts to contain the oil, no solution appeared to be imminent. The media narrative began to focus more on finger-pointing, often aimed at British Petroleum. Some of the criticism focused on BP’s competence. “They’re winging it,” declared Mike Papantonio, an environmental lawyer and guest on the May 10 edition of MSNBC’s Ed Show. A CNN story posted on Google News quoted Democratic Congressman Ed Markey’s remarks at the May 12 Congressional hearings in which he urged BP to do more to resolve the problem.

“The American people expect a response on par with the Apollo Project, not Project Runway,” Markey said. 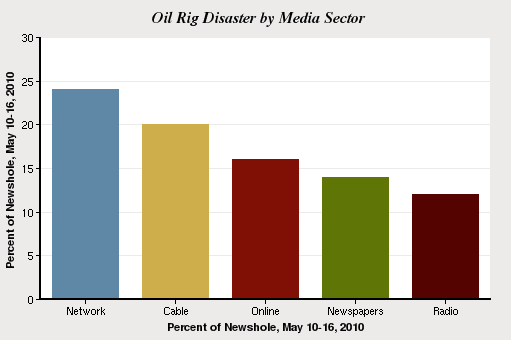 And with most of the frustration aimed at BP, the administration seemed relatively unscathed by the search for culpability, at least to this point.  On the May 14 “Good Morning America” program, ABC’s George Stephanopoulos said, “So far President Obama is largely escaping blame for his handling of the crisis. A new poll shows more Americans approve of the way the president’s handled the crisis than don’t.”

Much of the rest of the week’s coverage—about one-third—focused on the growing dimensions of the spill. By the end of the week, a new and sobering report emerged that the government may have vastly underestimated the amount of oil leaking into the Gulf. The May 14 New York Times quoted Ian R. MacDonald, a Florida State University oceanographer, who estimated that the leak could “easily be four or five times” the size of the original estimate of 5,000 barrels a day.

The nomination of New York native and former Harvard Law School Dean Elena Kagan generated significant coverage last week, as the media focused not so much on her views, but on her lack of a lengthy track record.

Only one sector of the media made the story its top focus during the week of May 10-16, and that was radio, which includes the ideological talk shows that thrive on political debate. The Kagan nomination was No. 1 here, at 15%.

Kagan was never a judge and the lack of a paper trail became a major element of the story. “That lack of time on the bench may both help and hurt her confirmation prospects,” reported the New York Times on May 10, “allowing critics to question whether she is truly qualified while denying them a lengthy judicial paper trail filled with ammunition for attacks.”

On John King’s May 10 CNN show, Harvard professor Charles Ogletree, a former Kagan colleague at Harvard, stressed her moderate views. “She’ll be a centrist, she’ll be someone who can hopefully influence a fifth vote, but she’s not going to be out to the left and different from anyone else on the court right now,” predicted Ogletree.

At the same time, critics questioned her resume. Fox News’s Sean Hannity opened his May 10 broadcast by asking “who is Elena Kagan? If confirmed, Kagan will be the youngest Supreme Court Justice, and the first member of the Court without any—any—judicial experience in four decades.”

News about the economy remained focused on overseas events last week. Fully 36% of that coverage examined the debt crisis in Europe, sparked by troubles in Greece. When the European Union injected a nearly $1 trillion package to shore up the weaker economies in the region, the faltering global markets stabilized. Later in the week, the storyline shifted as the media turned to more domestic concerns, such as persistent unemployment and the ups and downs of the stock market.

Overall, the economy was the No. 3 story of the week, generating 11% of all coverage, down from 13% the week before. And it was the top story in newspapers (16%), the media sector that traditionally devotes the most attention to the subject.

The 2010 mid-term elections were the No. 4 story last week, filling 4% of the newshole. The story touched on a number of races around the country, including the bitter Democratic Senate primary battle in Pennsylvania, where incumbent and former Republican Arlen Specter was being challenged by Joe Sestak

One week after registering as the biggest terrorism-related story since the News Coverage Index began in January 2007, the failed New York car bombing attempt fell to the No. 5 slot, at 5%. Last week, in the wake of the apprehension of chief suspect Faisal Shahzad, news outlets followed a series of additional arrests made by the FBI in connection with the case. 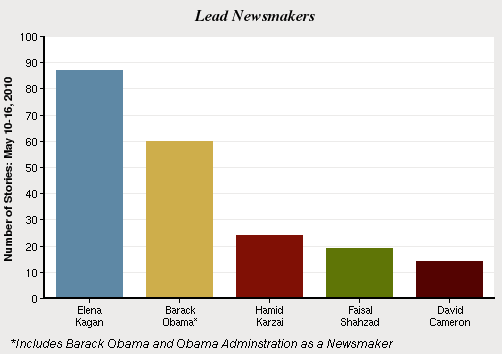 May 10-16 marked the second week in a row that Barack Obama was not the No. 1 lead newsmaker.

That position was occupied by Supreme Court nominee Kagan, who was a lead newsmaker of 9% of the week’s stories. (To register as a lead newsmaker, someone must be featured in at least 50% of the story.)  Despite that attention, it was still less than the coverage garnered by Sotomayor during the week of her nomination, when she was a lead newsmaker in 14% of all stories.

Obama was the No. 2 newsmaker, though, featuring in 6% of the stories. It was a series of different events—the conflict in Afghanistan, the oil spill, the economy, and the 2010 elections—that brought Obama into the narrative.

Afghan president Hamid Karzai visited the U.S. last week, sparking analysis of the Obama administration’s apparent pivot to a more conciliatory approach toward the Afghan leader. Karzai was the No. 3 newsmaker of the week, the focus of 2% of stories.

The No. 4 newsmaker, Faisal Shahzad, made a precipitous drop from the No. 1 spot the week before. The attempted Times Square bomber was a lead newsmaker in 2% of the stories from May 10-16, down from 13% the previous week.

Finally, in the aftermath of British parliamentary elections, the U.S. media began turning to the new Prime Minister, David Cameron, who ushered in the first Tory administration in 13 years. The leader of the Conservative Party was the No. 5 newsmaker last week, at 1% of all stories.

The Spill Leads the News in a Balanced Week

A Failed Terror Attack Tops a Grim Week of News