In a week dominated by disasters and near disasters, the New York bomb plot led the news, registering as the biggest terrorism story in the past three years.

From May 3-9, the failed attack in the heart of Manhattan accounted for 25% of the newshole, according to the Pew Research Center’s Project for Excellence in Journalism.

The media narrative on the plot was fueled by a series of quickly unfolding events including the arrest of suspect Faisal Shahzad and evidence apparently linking the Pakistani Taliban to the attempted attack in America’s largest city.

But the bomb plot was only part of a week filled with ominous events. The No. 2 story, at 20%, was the crisis in the Gulf of Mexico where oil continued to leak in the wake of the April 20 rig explosion. Last week, coverage began to touch on areas of politics and policy—including the culpability of the BP energy company and the potential impact on prospects for offshore drilling.

The week’s third-biggest story (13%) was the economy. Here too, coverage was fueled by a near cataclysmic event. On May 6, the Dow briefly fell 1,000 points before rebounding to recoup about two-thirds of that loss. While investigators focused on whether trading or computer errors contributed to the plunge, investors were clearly worried about the European debt crisis.

Another disaster, the Southeast flooding that left a reported 31 people dead and ravaged country music capital Nashville, was the No. 4 story (4%). Some of the commentary about that tragedy speculated that it would have received significantly more coverage had it not been for the newsworthiness of the terror plot and Gulf spill.

The fifth-biggest story (2%) was the hotly contested May 6 election in the United Kingdom that ended with no party winning an outright majority of seats. But it spelled the end for the Labour Party Prime Minister Gordon Brown.

Coverage of the New York car bomb attempt, which occurred on May 1, mushroomed last week with the arrest of Faisal Shahzad, a 30-year-old U.S. citizen born in Pakistan. It was more of a television story than anything else, accounting for 38% of the airtime studied on cable news and 33% on broadcast network news.

Indeed, it was the biggest single terrorism story since the News Coverage Index began in January 2007. The other major newsmaking events include the failed Christmas 2009 airline bombing near Detroit (23%) and the 2008 Mumbai assault that killed nearly 170 people (also 23%). The controversy over memos detailing the Bush administration’s harsh interrogation techniques helped terrorism account for 22% of the newshole from May 11-17, 2009. The Fort Hood shooting came next (20%) the week of November 9-15, 2009. And from May 18-24, 2009, when President Obama and former Vice President Dick Cheney delivered dueling speeches on national security, terrorism filled 19% of the newshole.

Last week, events moved quickly with the dramatic May 3 arrest of Shahzad, who was pulled off a plane about to leave New York for the United Arab Emirates. The media immediately began to flesh out his portrait.

On the May 4 ABC newscast, correspondent Chris Cuomo asked:  “Why did someone with apparently so much to live for simply decide to throw it all away?” Cuomo reported that Shahzad seemed to be living the “American dream” with a wife (who apparently enjoyed “Friends” and “Everybody Loves Raymond”), two children and a nice house in the Connecticut suburbs. But in 2009, there was a “disturbing change” as the family abruptly moved out and stopped paying their bills.

The rest of the picture was soon filled in. On Campbell Brown’s May 5 CNN show, correspondent Jeanne Meserve quoted a senior Pakistani official saying that in July 2009, Shahzad “was driven to Peshawar and eventually on to the tribal area of Waziristan where he is believed to have met with one or more Pakistani Taliban leaders.”  And by week’s end, U.S. officials were linking the Pakistani Taliban to the attack as the episode became internationalized. 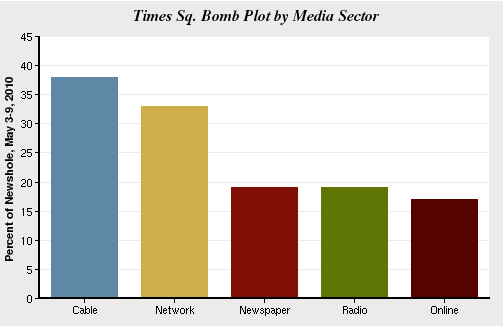 Another angle to the story involved a reversal of fortune for Attorney General Eric Holder as evidenced by this headline in the May 6 Washington Post: “For Holder, a rare moment to celebrate.”

The story noted that with the “swift arrest” of Shahzad, Holder—who had been under fire on some security issues, including the controversial decision to try Khalid Sheik Mohammed in a New York courtroom—was finally able “to claim a victory for the administration.”

On May 6, with the country still jittery over the car bomb case, cable networks suddenly homed in on what seemed like another terror scare in New York. But the abandoned cooler that shut down part of Times Square turned out to be a false alarm.

Since the inception of the NCI, a number of disaster stories have been covered as “one-week wonders”—events that attracted an initial burst of attention and then quickly vanished from the media radar screen.

The opposite occurred in the case of the Gulf oil spill.

The week the story broke (April 19-25), it accounted for 5% of the newshole. From April 26-May 2, as fears of an ecological disaster grew, it filled 16%. And last week, that number increased to 20% as the story began to expand into questions of blame and responsibility.

And although it trailed the terror plot in overall coverage, the oil spill registered as the No. 1 story in three of the five media sectors monitored by PEJ—radio at 26%, newspapers at 23%, online at 21%.

A May 4 Wall Street Journal story reported that in the wake of the oil leak, the Minerals Management Service, which regulates the offshore oil business, was coming under increasing “congressional scrutiny.”

“BP and the Obama Administration say they are focused on stopping the flow of crude from the damaged well nearly a mile below the surface,” the story continued. “But already lawmakers and interest groups are firing the first shots in what could be a lengthy fight over financial liability and political blame.”

A Los Angeles Times story the same day reported on a statement by BP boss Tony Hayward that the spill “is not our accident, but it’s our responsibility.” And the piece looked at some early political fallout from the disaster.

“In a sign of eroding political support for offshore drilling, Gov. Arnold Schwarzenegger withdrew his backing Monday for a plan to allow new wells to be drilled from an existing platform off the coast of Santa Barbara,” the Times noted.

Coverage of the economy from May 3-9 dropped to 13% after accounting for 24% of the coverage the previous week. But that doesn’t mean there wasn’t major news.

The week began with serious concerns about the fiscal crisis in Greece, which spawned violent protests and riots. It was punctuated by the Dow’s wild ride on May 6. And by week’s end, the narrative was driven by the upbeat news that the economy added almost 300,000 jobs in April. Even a rise in the unemployment rate to 9.9% was attributed in some quarters to a sense of optimism that was encouraging more jobless citizens to look for work.

Indeed, in the second half of the week, from May 6-9, the economy was actually the No. 1 story at 25% of the newshole. In other words, the economy did not so much subside as a story as was pushed aside.

The No. 4 story—the flooding that wreaked havoc in parts of Tennessee—accounted for 4% of the overall coverage, generating the most attention (at 6%) in the online sector.

Given the dimensions of the disaster, the relative lack of coverage became part of the story. It also prompted an apology from CNN’s Anderson Cooper who said, “I think a lot of folks feel like the national media hasn’t paid enough attention. And I certainly take blame for that. And we should have been here sooner.” 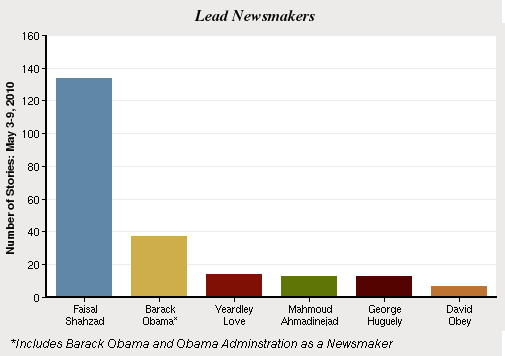 The pivotal U.K. elections, coming amid economic fears and widespread discontent with government, provoked comparison to the American political climate. But it barely caused a ripple in the mainstream media here. It was the No. 5 story at 2% of the newshole, generating the most attention (4%) in the more internationally oriented online sector.

New York terror suspect Faisal Shahzad was the focus of last week’s media narrative, registering as a lead newsmaker in 13% of the stories from May 3-9. (To be a lead newsmaker, someone must be featured in at least 50% of that story.) By way of comparison, that is similar to the level of attention generated by Michael Jackson (15%) on the week of his death (June 22-28, 2009) and Supreme Court Justice Sonia Sotomayor (14%) when her name was placed in nomination for the High Court (May 25-31, 2009).

President Obama was a distant second, showing up as a lead newsmaker in 4% of the week’s stories. That continues a downward trajectory for Obama whose newsmaker presence has decreased in each of the last five weeks. But it still marked the first time since January 18-24—when Republican Scott Brown pulled off a major upset win in the Massachusetts Senate race—that the President was not the week’s leading newsmaker.

The next three newsmakers all registered in 1% of the week’s stories. Yeardley Love, the University of Virginia lacrosse player, was allegedly killed by her ex-boyfriend, George Huguely, a member of the school’s male lacrosse squad. Huguely was also among the week’s top newsmakers. And Iranian President Mahmoud Ahmadinejad generated attention during a trip to the U.S. to attend a UN conference on nuclear proliferation.