The worst U.S. mining accident in four decades – and related questions of mine safety – led news coverage in the mainstream media last week.

During the week of April 5-11, 17% of the newshole was devoted to the explosion in a West Virginia mine that killed 29 workers, according to the Pew Research Center’s Project for Excellence in Journalism.

That was about twice the press attention given to the next biggest story, the U.S. economy. Coverage of labor statistics, the strains on local government, federal oversight of banks, and other stories comprised 8% of the week’s news coverage.

At No. 3 for the week was Supreme Court Justice John Paul Stevens’ announcement that he would retire after 35 years on the court. The media devoted 7% of the newshole to the announcement, Stevens’ career, and who might replace him.

Coverage of a confluence of events related to nuclear arms was the No. 4 story of the week. The signing of a new arms-reduction treaty with Russia, the Obama administration’s release of a new U.S. nuclear weapons doctrine, and preparations for a large gathering of world leaders in Washington to discuss nuclear security, filled 6% of the newshole.

The return to the links of scandalized pro golfer Tiger Woods at the Masters Golf Tournament was the No. 5 story, with 5% of the newshole.

On Monday, April 5, an explosion rocked the Upper Big Branch mine in Montcoal, W.Va., killing 29 workers.

The incident and the search for survivors that followed, which ultimately proved unsuccessful, drew attention across platforms. The mining accident topped the news agenda of cable and network television, as well as online news outlets. In newspapers, it was the No. 2 story, and on the radio, where talk show hosts generally focus on politics, it ranked at No. 4.

The nature of the coverage evolved during the week as rescuers spent days searching for the missing miners – and questions were raised about the safety record of the mine operator and whether the disaster could have been averted.

In the hours following the 3 p.m. blast on Monday, early estimates put the toll of confirmed dead at six or seven workers, with another 20 still missing underground. Lisa Sylvester, reporting Monday evening for CNN’s The Situation Room, told viewers that “It does sound like this is a pretty serious explosion at this point.”

By Tuesday, April 6, as the death toll mounted, the press expanded the coverage, turning to the history of safety violations by Massey Energy, the company that owns the mine. On NBC’s Nightly News, senior investigative correspondent Lisa Myers provided some history of a previous mining accident, near Sago, W. Va., in 2006. 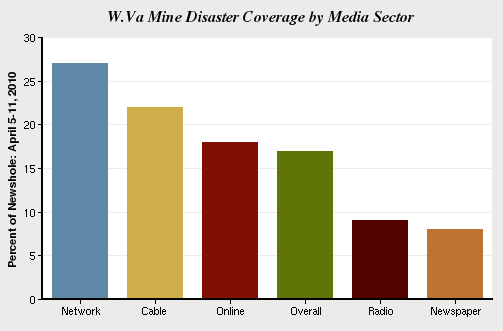 “After the Sago disaster, in which a dozen miners were killed, both the federal government and West Virginia toughened mine safety laws. Yet this mine was still operating after repeated—and serious—safety violations, which experts say should have raised red flags,” Myers told viewers.

By Wednesday, some outlets focused on the pressures that compel Appalachian workers to do such dangerous work. CBS national correspondent Jim Axelrod reported on the April 7 broadcast of the Evening News that “It’s a risk they’ve been taking for generations. The average coal miner here makes $73,000 — more than double the wage of other industries in West Virginia.” The story showed Bobby Sanger, the brother-in-law of one of the accident’s victims, explaining that “It’s the way of life of Appalachia.”

On Saturday, April 9, the “grim Appalachian ritual” (New York Times) came to a somber end when rescue workers emerged to report they had found the bodies of the last of missing miners, ending hopes of any survivors. A total of 29 miners were confirmed to have died.

The last U.S. mining accident to achieve significant media coverage was the collapse of the Crandall Canyon coal mine in Huntington, Utah. During the week of August 5-10, 2007, that story filled 13% of the newshole, and was the No. 2 story that week. Since then, no other mining incident has generated more than 1% of the weekly coverage. (Newshole data is not available for the Sago accident, which occurred before PEJ began compiling the index in 2007.)

Trailing behind the West Virginia mining disaster was coverage of the U.S. economy, which a week earlier had been the top story. Even with media attention given to the mine tragedy, the economy still managed to generate significant coverage, at 8% of the newshole, down from 10% the week before.

Again, much of the coverage (18% of the economic newshole) focused on employment, some of it encouraging, such as an April 6 report on CNN’s Anderson Cooper 360, highlighting the increase in hiring at restaurants and hotels, among other sectors, in the month of February.

But around the nation, many economic challenges persisted. The second biggest component, accounting for 14% of the economic coverage, during the week concerned the impact of the downturn on state and local governments. The Los Angeles Times, on April 6, reported that the city might be unable to pay its bills in four weeks. The Seattle Times on April 9 reported that the state of Washington would likely implement a host of new taxes to cover a budget shortfall of $2.8 billion.

At No. 3 for the week was Supreme Court Justice John Paul Stevens’ announcement that he would retire from the bench on April 9. At 89, Stevens is the oldest justice on the court and one of the longest serving in history. Seven percent of the week’s overall coverage was devoted to this story, which broke late in the week.

The No. 4 story of the week, at 6% of the newshole, was a series of related storylines regarding nuclear weapons. Nearly a third of that coverage related to the U.S.-Russia nuclear arms treaty, which was signed in Prague by Presidents Obama and Dmitry Medvedev on April 8. Also generating coverage was the Obama administration’s new nuclear policy, unveiled April 6, which emphasized efforts to deter weapons proliferation, as well as the lead-up to the nuclear summit in Washington that got underway April 12.

And, back in the news was famed golfer Tiger Woods, who made his return to the sport at the Masters Tournament after several months of dealing with allegations of marital infidelity. The story, No. 5 for the week, comprised 5% of the newshole.

Woods held a press conference on April 5, answering a number of questions but “bristling” at some directed at his personal life, according to an AOL News story. The news reports soon turned to his performance on the course, which kept him in contention throughout the tournament. The Tampa Tribune on April 9 summarized it thus: “Woods might have lost his moral compass. But his swing hasn’t gone anywhere.”

Woods’ return to professional golf was also a return to the media spotlight—the last time his affairs featured heavily in the news was the week of February 15-21, as the No. 6 story that week, also receiving 5% of all coverage. 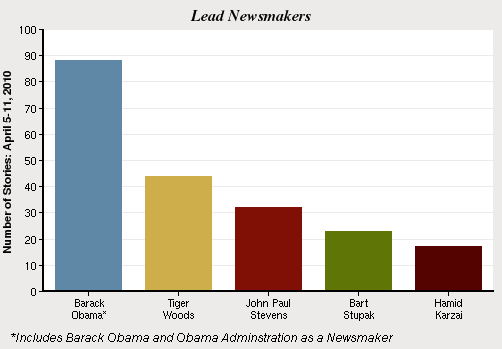 President Barack Obama remained the top newsmaker last week, though the share of stories featuring him dropped to 9%, down from 11% the week before. (To be a lead newsmaker a person must be referred to in at least 50% of the story.)

Obama drew the media’s attention for his central role in the new U.S. nuclear weapons policy, as well as his power to nominate a new Supreme Court justice to replace the John Stevens, who announced this week that he would retire.

The No. 2 lead newsmaker, Tiger Woods, was the focus of 4% of the week’s stories. The winner of the Masters Tournament, in which Woods ultimately placed fourth, was Phil Mickelson. He was not among the top newsmakers during the week of April 5-11, which ended the day he emerged victorious.

Behind Woods was Justice Stevens, whose long career in the Supreme Court was recapped. At 3% of all stories, Stevens was the biggest Supreme Court newsmaker since Sonia Sotomayor captured 3.7% of the newshole the week she was confirmed and sworn in as a justice, August 3-9.

At No. 4, with 2%, was Michigan congressman Bart Stupak, who announced he was not going to run for re-election. Stupak, an anti-abortion Democrat, became a lightening rod when he pressed for restrictions on abortion funding in the health care bill. His retirement decision leaves open a previously safe seat for Democrats heading into mid-term elections.

Afghan President Hamid Karzai was among the top five newsmakers for the second week in a row. He was the focus of 2% of the week’s stories, many of which addressed the fraying relations between Karzai and the U.S. government.

The V-Word Heats Up the Iraq Debate

The Distant Election Becomes the Big News on Talk Shows

Mine Collapse is Big News But Doesn’t Top the Campaign