With President Obama dramatically raising the stakes and investing a major chunk of political capital in the battle, the health care debate continued its resurgence in the news, topping the media agenda for the second straight week.

From March 1-7, health care accounted for 18% of the newshole, according to the Pew Research Center’s Project for Excellence in Journalism. Although that is down from 24% the previous week, it marks a strong overall comeback for a subject that dropped from the media glare earlier this year when the prospects for passing, or even voting on legislation seemed to have dimmed.

Last week, the narrative was driven by Obama’s White House remarks on the afternoon of March 3 pushing for approval of a bill within a few weeks and declaring, that “now is the time to make a decision.” That came six days after a televised health care “summit” that highlighted but failed to ameliorate the seemingly intractable divisions between Republicans and Democrats. Much of last week’s media coverage and commentary focused on two major points—the extent of Obama’s political gamble and the very uncertain  prospects for passage.

The week’s No. 2 story (13%) was the other major domestic issue, the state of the U.S. economy, which led in both the radio (16%) and newspaper (15%) sectors. The key storyline was a very unpopular one-man effort by Senator Jim Bunning to hold up a bill that, among other things, provided benefits to the unemployed.

That was followed by the No. 3 story, the second catastrophic earthquake to strike since the beginning of the year. The fallout from the February 27 disaster that reportedly killed hundreds of people in Chile accounted for 10% of the week’s coverage.

The No. 4 story, at 6% of the newshole, was a series of events related to the 2010 election cycle, ranging from California Attorney General Jerry Brown’s decision to seek the California governor’s job (a post he held nearly two generations ago) to a hotly contested Texas Republican gubernatorial primary. 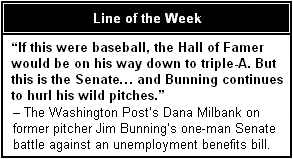 The fifth-biggest story from March 1-7, at 3% of the newshole, primarily involved another prominent politician. Democratic House Ways and Means Chairman Charles Rangel, facing a series of ethics charges and investigations, resigned that powerful post last week.

It was only a few weeks ago that much of the media seemed to think the legislative battle over health care was dormant and perhaps even over. The end might have come, it seemed, after Republican Scott Brown’s January 19 victory in the Massachusetts Senate race deprived Democrats of a filibuster-proof majority. From the beginning of the year through the first three weeks in February, the subject accounted for only 5% of the newshole.

But that’s changed in the past few weeks as Obama once again made passage of legislation—with or without GOP support—a top priority of his presidency.  From March 1-7, health care was the top story online (17%) and in the politically oriented cable news universe (29%). And much of the coverage noted that the prospects for any bi-partisanship appeared very dim last week.

“Although it is adopting some Republican ideas, the White House isn’t expecting Republicans to abandon their opposition,” the March 3 Wall Street Journal noted. “Aides say those differences are too deep to resolve and Democrats will have to act alone.”

At the same time, according to many media accounts, it was far from certain that the President would be able to cobble together the necessary Democratic votes.

An Associated Press story posted on the FoxNews web site on March 5 reported that Obama had “summoned more than a dozen Democrats from the House of Representatives to the White House, pleading with them to put aside their qualms and vote for his massive health care overhaul…Obama urged uneasy rank-and-file moderates and progressives to focus on the positives rather than their deep disappointment with parts of the bill.” 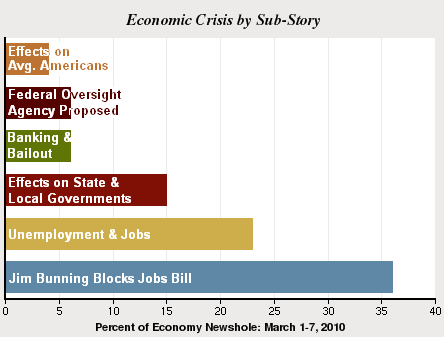 In a March 3 report on CNN, White House correspondent Ed Henry pointed out the stakes for the President. Noting that many legislative battles “are preordained,” Henry said that in this case, legislative leaders “really don’t know how all this is going to end up. But the president has gone so far down the road that he can’t accept failure. So, they are going for everything with this, because his legislative agenda is hanging in the balance.”

One thing is clear, though. Obama has succeeded in making health care a bigger narrative again.

The week’s No. 2 story, the economy (13%), was also focused on Capitol Hill. The leading storyline involved retiring Republican Senator Jim Bunning, a Hall of Fame baseball pitcher and a sometimes cantankerous lawmaker, who bucked members of both parties by stalling a bill that would have extended unemployment benefits, claiming that legislators had not figured out how to pay for it.

As pressure grew from the Republican side of the aisle, Bunning finally backed down.

“A Republican who had been stubbornly blocking a stopgap measure to extend help for the jobless relented yesterday under withering assaults from Democrats and dwindling support within his own party,” the Associated Press reported on March 3. “[Bunning] alone had blocked passage of the $10 billion measure, causing federal furloughs and threatening the unemployment benefits of hundreds of thousands of people The impasse had led to political gains for Democrats attacking Bunning and his fellow Republicans.”

The other major piece of economic news driving coverage last week was the report that the February unemployment rate had held steady at 9.7%, a number that was generally greeted by analysts as modestly good news.

Coverage of the third-biggest story, the aftermath of the Chilean earthquake (10%) was the top story last week in broadcast network news, where it accounted for 16% of the airtime studied. (Network news, as a rule, tends to devote more coverage to disasters than any other media sector.)

It’s also worth noting that last week’s coverage of Chile appeared to be disappearing fast. Although it was the second-biggest story, at 15% of the newshole from Monday through Wednesday, it tailed off to the No. 10 slot (at 2%) from Thursday through Sunday.

Even with Election Day about eight months away, the 2010 campaign is a subject beginning to show up regularly on the roster of top stories. The week of February 22-28, it was the sixth-biggest story (3%) when the news was beleaguered New York Democratic Governor David Paterson’s decision not to run again. From February 15-21, it was the No. 4 story (7%), driven largely by Indiana Democrat Evan Bayh’s announcement that he would not seek re-election in the Senate. In the last three months of 2009, by comparison, the subject accounted for only 1% of the newshole. It is worth watching how much of the rest of the year is focused on anticipating these elections.

Two other officials whose political fortunes changed abruptly last week accounted for the No. 5 story, at 3%. The dominant newsmaker was Rep. Rangel’s decision to relinquish his chairmanship in the face of substantial ethical questions. Another New York Democratic Congressman Eric Massa, being investigated for alleged sexual harassment, announced he was leaving Congress and claimed he was being ousted by fellow Democrats who did not want him casting a vote against health care.

The Congressional corruption scandals got the most attention last week (7% of the newshole studied) in the radio sector. 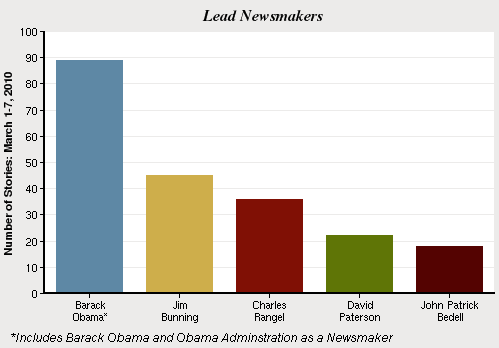 The next three newsmakers were all elected officials ensnared in controversies of various magnitudes. Jim Bunning’s actions last week made him the No. 2 newsmaker (at 4%) of the news. Departing Ways and Means Chair Charlie Rangel came next at 3% and he was followed by New York Governor David Paterson (2%), who has also become mired in several scandals and chosen not to seek re-election.

The fifth-biggest newsmaker (2%) was John Patrick Bedell, the man who was killed after opening fire and wounding two police officers at the Pentagon on March 4. In some of his online writing, Bedell expressed the belief that the U.S. government was behind the 9/11 terror attacks.