Fueled by the spectacle of a televised bi-partisan meeting on the deeply polarizing issue, the health care debate re-ignited last week to dominate the news agenda.

From February 22-28, health care was the No. 1 story, filling 24% of the newshole according to the Pew Research Center’s Project for Excellence in Journalism. That represented a dramatic spike in coverage for a subject that accounted for only 4% of the newshole the previous week and had been recently overshadowed by the economy, the Haiti earthquake and big snowstorms.

Two closely related events fueled the narrative, according to PEJ’s weekly News Coverage Index. First came President Obama’s February 22 unveiling of his White House health care plan. That was followed, three days later, by the Blair House summit that much of the media viewed a fascinating exercise that did little but highlight the gaping chasm between Republicans and Democrats.

The No. 2 story last week, at 11%, was the U.S. economy. And a key storyline was a rare display of bi-partisanship in the Senate with the passage of a jobs bill.

With the head of Toyota apologizing before Congress last week, the car company’s continuing problems made it the No. 3 story, at 10% of the newshole. That was followed in the fourth spot (7% of the newshole), by the Vancouver Olympics, with much of the focus on the U.S. men’s hockey team. (The February 28 overtime loss to Canada in the Gold Medal game occurred too late to be included in this report.)

The week’s fifth-biggest story, (at 5%) was the conflict in Afghanistan as U.S. and Afghan troops solidified a key ground victory in Marja.

Last week marked a major comeback for a health care reform story that lost much of its media momentum after Republican Scott Brown’s January 19 U.S. Senate victory in Massachusetts deprived Democrats of their filibuster-proof majority. Last week’s coverage was the most for the subject since the week of December 21-27, when it filled 27% of the newshole as the Senate passed its version of health care reform.

Health care led in four of the five media sectors studied by PEJ, but a good deal of the coverage was partisan talk show commentary. Indeed, the health care debate filled 51% of the airtime last week on the 10 radio and cable talk shows monitored by PEJ. This mirrors a pattern we have seen at other times in health care coverage, particularly last summer when town hall protests were a major storyline dominating the talk show airwaves. 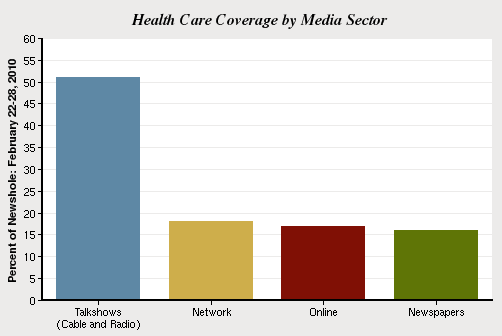 Last week’s event, according to much of the media reaction, was more about showmanship than substance. Not all of it was as blunt as the headline atop on AOL’s “Politics Daily” site calling it “Seven Hours of Blair House Blather.” But the overwhelming consensus in the press was that there was nothing approaching a meeting of the minds. And generally speaking, the more non-partisan assessments of the event raised doubts about whether Obama had achieved either a policy or public relations boost from the summit.

The Washington Post reported that, “The remarkable session at Blair House ranged from dull to pointed as it revealed the deep divide between the two parties over health care. It was the same philosophical gulf that led to the collapse of bipartisan Senate negotiations last summer, and the primary reason Congress has resorted to changing the health-care system piecemeal, rather than in broad strokes, over the years.”

Much of the commentary, particularly on cable, was considerably more pointed. On MSNBC, Hardball host Chris Matthews compared the Republicans at the summit to the North Korean assembly where “ everybody looks, acts very much in terms of their behavior, very similarly, and actually says the same thing…Here’s their simple message.  ‘Kill the bill and start over.’”

On his Fox News Show, host Bill O’Reilly asserted that Democrats want “the nanny state to provide” and Republicans “want competition to lead the way and shudder at a big government health care scenario.”

O’Reilly then stated his view that the “USA is now heading towards bankruptcy and that would make every citizen sick. There’s no way America can afford another multi-trillion dollar entitlement. So health care reform, yes, but it has to be smaller and more marketplace driven.”

By the end of the week, much of the analysis concluded that if Democrats wanted comprehensive health care reform, they would have to pass it without GOP support.

Attention to the economy from February 22-28 (11%) was pretty much in sync with recent coverage, which has ranged between 10% and 21% in each of the past five weeks. One key storyline was the Senate’s passage of a pared-down $15 billion jobs bill by a 70-28 vote that included a number of Republican supporters. But also making news last week was a report that bailed out insurance giant AIG lost almost $9 billion in the fourth quarter of 2009.

As the No. 3 story, the Toyota saga jumped dramatically from the previous week. One reason was the appearance of Toyota executives testifying on Capitol Hill. A week earlier, when steering issues were linked to the popular Corolla model, Toyota’s problems accounted for but 1% of the newshole.

The carmaker’s recall problems have been in the headlines for five consecutive weeks, a long siege of bad news. And at 10% of the newshole, last week’s coverage ranked second in that interval to the week of February 1-7, when it accounted for 11%.

The catalyst for much of the media attention last week was a Congressional hearing, highlighted by the apology from Toyota boss Akio Toyoda who acknowledged that, “Quite frankly I fear the pace at which we have grown was too quick.”

The final week of the Vancouver Olympics registered as the No. 4 story at 7% of the newshole. That was down only marginally from the previous week (8%) and up slightly from the opening coverage (5%). The U.S. hockey team, which scored an attention-grabbing 5-3 upset of the Canadians on February 21, got their moment in the media spotlight last week. Once again, it was network news (14% of the newshole) that paid the most attention to the Olympics—led by host network NBC, which devoted nearly 40% of its news airtime studied to the competition.

Afghanistan was among the roster to top stories for the second week in a row, ending up in the No. 5 slot (at 5%) and generating the most attention in the online sector (11% of the newshole.) The fighting inside Afghanistan dominated the week’s coverage and two key events were the newsmakers, a U.S. airstrike that killed more than two dozen Afghan civilians as well as the successful military offensive against the Taliban in Marja. 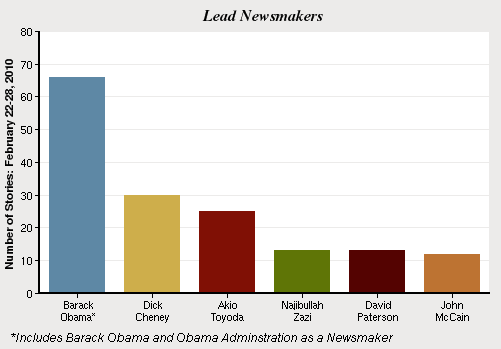 From February 22-28, President Obama was the top newsmaker, registering as the dominant figure in 7% of the stories for the third consecutive week. (To be considered a lead newsmaker, a figure has to be featured in at least 50% of that story.) The President was trailed in the No. 2 spot by one of his chief critics. Former Vice-President Dick Cheney, who was hospitalized last week with recurring heart problems, was a lead newsmaker in 3% of the stories.

The third-biggest headline generator (also at 3%) was Akio Toyoda, who made news with his appearance before Congress. He was followed by Najibullah Zazi (1%), the Afghan immigrant who pled guilty last week to plotting a terror attack in New York and beleaguered New York Governor David Paterson, (1%), who announced he would not seek a new term.

The fifth-biggest newsmaker of the week was 2008 GOP Presidential candidate John McCain (also 1%), who engaged in a bit of sparring with Obama last week during the health care summit, criticizing what he characterized as the cloak of secrecy that Democrats had used to craft health care legislation.