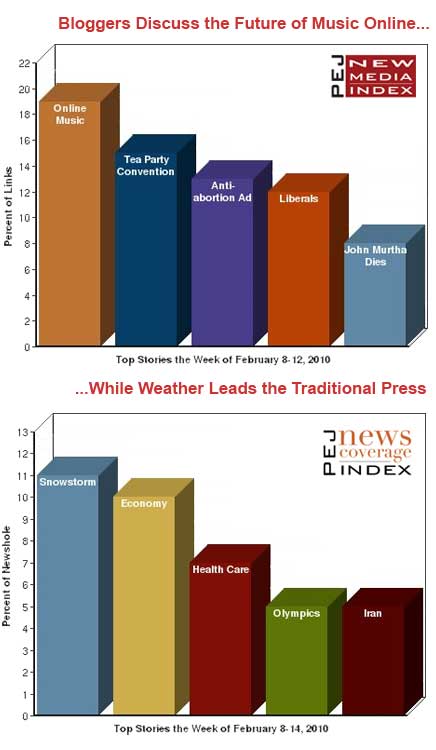 In the blogosphere, the top subject was the news that Warner Music was no longer going to support free online music streaming services such as Spotify, We7 and Last.fm. From February 8-12, this topic received 19% of the week’s links according to the New Media Index produced by the Pew Research Center’s Project for Excellence in Journalism.

The company decided it would instead focus more on paid music services online, a decision that spurred a flurry of discussion on blogs about online business models. Most of the commentators strongly criticized Warner’s plan, saying sites that charge for content just won’t work.

On Twitter, Google was the most popular subject last week. More than a third (35%) of the news links were about the search powerhouse.

Google’s week on Twitter started well as many commended the company’s clever Super Bowl commercial. However, Google’s foray into the world of online social media called Google Buzz received a fair amount of criticism about privacy concerns. The February 9 roll-out unleashed a wave of disapproval directed at the company, which responded by week’s end.

Neither of these topics received much attention in the mainstream press last week according to PEJ’s News Coverage Index. Instead, the traditional press led with the snowstorm that battered much of the East Coast (11% of the newshole) and the state of the economy (10%), which focused on the difficult efforts to forge a jobs bill in Washington.

The rest of the top-five subjects on blogs were politically focused. The second largest subject, with 15% of the links, was the National Tea Party Convention held in Nashville. Among the stories that gained attention was a glowing assessment of keynote speaker Sarah Palin by Washington Post columnist David Broder.

The third story (at 13%) was a continuation of the subject that led on blogs the previous week: the anti-abortion Super Bowl ad featuring University of Florida football star Tim Tebow. Most of the links were to a Los Angeles Times story that argued the ad itself was not nearly as controversial as the hype surrounding the ad suggested.

A February 7 Washington Post editorial by University of Virginia Professor Gerald Alexander claiming that many liberals are guilty of "intellectual condescension" finished fourth at 12%. And the passing of Rep. John Murtha (D-PA) at the age of 77 finished fifth at 8%. 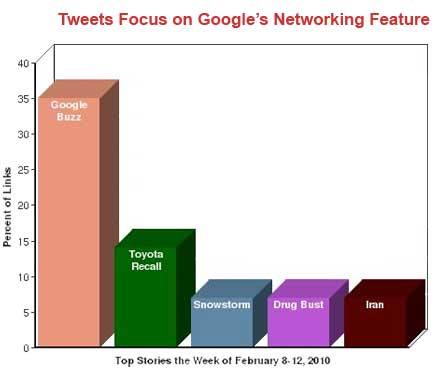 On Twitter, the second-largest subject (at 14%) was the ongoing developments involving beleaguered Toyota with the company announcing it was recalling 400,000 hybrid cars. The huge snowstorm that pounded the Mid-Atlantic region was third at 7%, followed by an unusual drug bust that uncovered 30 pounds of marijuana from Mexico smuggled inside framed pictures of Jesus Christ (at 7%), and news about the protests in Iran marking the 31st anniversary of country’s revolution (also at 7%).

As with much online content, companies have struggled to create successful businesses around the growing number of people who listen to and download music online. Some Web sites like Pandora and Spotify serve as music aggregators-not producing their own music but offering a wide range of streaming music to users. They charge nothing to users, instead seeking revenues from advertisements. But unlike news aggregators, Pandora and others pay a fee to music producers to carry their music.

Last week, record label Warner Music announced it would stop leasing its music to such sites and instead focus on places where consumers pay for music directly.

This announcement sparked plenty of online conversation about many of the same issues being debated in the news industry: namely "free" versus "fee." Here, though, the debate was dominated by consumers and the conclusion was clearly on the side of free.

Some approached the question from a broad scope:

"So we have one label heading off in a separate direction from the rest of the industry, seemingly chasing subscription sales to people showing little interest in subscriptions," noted Cliff Riseborough at DRM News. "I guess we’ll see which business model ends up winning out with the public."

"The trouble is, while free streaming doesn’t work well enough to please record labels, it sure does work for consumers-and taking away what used to be free has never sat well with them," added Edgar Bronfman Jr. at Startup Herald.

Others aimed their assessment directly at Warner Music.

"Warner Music is ignoring basic economics here and worse, ignoring a large market of customers who they can make money on selling true scarce goods," wrote Michael Sherrin at Prodigeek. "Warner Music could use streaming as a marketing tool to increase the value of scarce goods (not music files) like concert tickets, merchandise, or the many other new music business models we’ve seen."

"Promotion sells records," asserted Ian Youngs at The Blog Fueled Frenzy. "If we don’t hear the freakin’ songs on your catalogue why the hell would I want to buy ’em."*

"Yet again a big label shoots itself in the foot," declared enigmax at Freakbits. "The question is, when will the rest follow?"

For Google, last week started off with many Twitter users praising their February 7 Super Bowl ad called "Parisian Love." In the ad, a series of Google Web searches, ranging from "how to impress a french girl" to "how to assemble a crib," chronicled a romantic relationship.

"Just saw the google ad they played during the super bowl. Cutest thing ever," tweeted Catcher of the Key.

"Ok…you know you’re a sap when watching the Google ad from the Super Bowl gets you misty," admitted Christy Aylesworth.

On Tuesday, however, the tide changed. Google’s unveiling of its new social networking feature, Google Buzz, did not generate nearly as positive a response and set off a wave of activity as the week ensued.

Many Twitterers expressed concerns with privacy settings on Buzz, which automatically revealed everyone in a user’s contact list even without their approval. A number of tweets linked to a CNET article by Molly Wood who detailed the ways the service exposed information that she did not want to make public.

"Privacy is a thing of the past with Google Buzz," warned John Shanyinde.

"Why would anyone disclose MORE info for Google to profile you with?" asked Kurtsh.

"Buzz is rapidly showing itself to be a pile of privacy-killing crap," concluded George White.

On Thursday, Google responded to the concerns by announcing it had changed the privacy settings to allow users to opt-out of revealing personal information. These changes placated some.

But the problems for Google did not end there. Hundreds of Twitterers linked to another piece on CNET.com, this one by Caroline McCarthy, who expressed doubts that Buzz would be able to break into the social networking market dominated by Facebook and Twitter.

And a week after the launch on February 16, the Electronic Privacy Information Center filed a formal complaint with the Federal Trade Commission, accusing Google of violating federal consumer protection law because of the way it handles private profile and email information. Google responded to the complaint with an email to MSNBC.com claiming it was making further adjustments and that they will always keep "user transparency and control top of mind."

Two of the top-five most viewed news videos on YouTube last week were from the same television event-a February 3 interview by Fox News’ Bill O’Reilly with comedian and host of The Daily Show on Comedy Central, Jon Stewart.

During the wide-ranging interview, Stewart and O’Reilly discussed a number of topics including President Obama, Stewart’s place in the media landscape, and the question of conservative bias at the Fox News channel.

During ” target=”_blank” rel=”noopener noreferrer”>part two of the interview, Stewart, a frequent critic of Fox News, tells O’Reilly, "You have become in some ways the voice of sanity here…which is like being the thinnest kid at fat camp."

Combined, the two parts of the interview were viewed more than a million times.