Last week, as lawmakers skirmished over a jobs bill and sparred over the prospect of a health care summit, the biggest news in Washington—and in the nation—was the weather. And in D.C., even coverage of winter’s wrath wasn’t exempt from politics.

From February 8-14, the powerful storms that belted the nation’s Capitol particularly hard constituted the No. 1 story, filling 11% of the newshole, according to the Pew Research Center’s Project for Excellence in Journalism. As is often the case, the dramatic weather was primarily a TV story, finishing first in two sectors—network news (19% of the airtime studied) and cable news (12%), according to PEJ’s weekly News Coverage Index, a content analysis of some 52 different news outlets from the mainstream media.

Aside from basic snow-driven coverage of what Barack Obama called “Snowmaggedon,” the media examined angles ranging from questions about global warming to the taxpayer costs of shutting down the federal government.

The storm coverage topped a week of relatively balanced coverage in which no single story dominated. The No. 2 topic from February 8-14 (at 10%) was the U.S. economy. The top storyline involved the employment picture, including floundering efforts to pass a jobs bill. The No. 3 story (7%) was the health care debate, and much of that coverage involved Obama’s effort to convene a televised bi-partisan meeting that was greeted warily by some Republicans.

The opening of the Vancouver Winter Olympics came next (the fourth-biggest story at 5%), although tragically, a major storyline was the death of a 21-year-old luger from the nation of Georgia who crashed during a trial run. And in a week in which protests marked the 31st anniversary of the Islamic Revolution and the nation announced it was escalating its uranium enrichment program, Iran was the No. 5 story, at 5% of the newshole.

And for the first time since the January 12 tragedy, the earthquake in Haiti dropped off the roster of top-five stories in the NCI, although at 5% of the newshole, it received only negligibly less coverage than events in Iran and the Winter Olympics.

Much of the coverage of the last week’s snowstorms made for a classic television spectacle, with anchors and correspondents broadcasting from the midst of mounds of white stuff.

On February 10, a bundled up ABC anchor Diane Sawyer opened the newscast describing “Stormzilla” from inside snowy Central Park in New York.

“Tonight on World News, white out,” she declared. “The Great Blizzard of 2010 rocks the record books. One hundred million people are stuck in the snow.”

While basic coverage of the storm—from multi-vehicle pileups to children frolicking in snow banks—constituted much of the media attention, the story spawned other angles, particularly as it pertained to Washington D.C., which broke its record for annual snowfall.

The Associated Press reported that residents of the District seemed ready to take out their storm frustrations on local officials.

“The mayor of the nation’s capital and other politicians are feeling the heat for not moving faster to clear the streets of snow after the historic back-to-back blizzards that slammed the East Coast,” declared the AP story, a seeming perennial snow storm gripe. “In Washington, which was blanketed with about 18 inches of snow over the weekend and 10 more on Tuesday and Wednesday, residents complained that snow removal by Mayor Adrian Fenty’s administration seemed arbitrary, with some streets plowed numerous times, others not at all.” 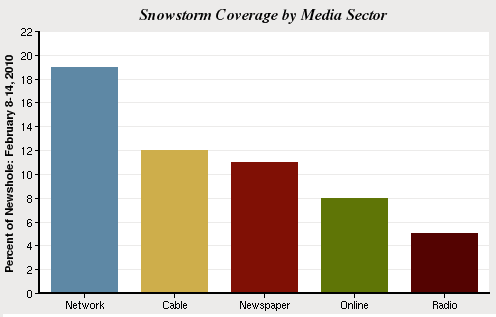 Some of the coverage, such as this Reuters story, also pointed out the high price of the government snow shutdown.” The blizzard and record snowfall that brought the U.S. capital to a standstill is costing taxpayers about $100 million each day the federal government is shut. Near-whiteout conditions left federal offices closed for a third straight day yesterday, and last night the Office of Personnel Management announced the shutdown remains in effect for today. The office estimates that each day the government closes results in a loss of about $100 million in productivity and other costs.”

And a February 10 New York Times story examined the storm’s impact on a major political and  policy issue—global warming—as such conservative talk hosts as Sean Hannity and Rush Limbaugh used the storm to attack climate-change theory.

“As millions of people along the East Coast hole up in their snowbound homes, the two sides in the climate-change debate are seizing on the mounting drifts to bolster their arguments,” the story noted. “Skeptics of global warming are using the record-setting snows to mock those who warn of dangerous human-driven climate change—this looks more like global cooling, they taunt. Most climate scientists respond that the ferocious storms are consistent with forecasts that a heating planet will produce more frequent and more intense weather events.”

Coverage of the economy was the second biggest story last week, registering as the leading story in the newspapers sector (16%) and online (12%).  But coverage was down markedly from the previous two weeks when the subject accounted for 21% and 18% of the newshole respectively.

The largest component of economic coverage last week was the employment picture and the fate of the jobs bill was a key element, given the news that Senate Majority Leader Harry Reid had pared down the bill dramatically.

“Reid appears to be making a political calculation that the GOP will have a difficult time voting against his own, stripped-down version of jobs legislation,” declared an ABC News story. “That’s because Reid has left the bill’s central job creation provisions intact, while jettisoning tax breaks and other provisions intended to win Republican support.”

By registering as the third-biggest story, at 7% of the newshole, the health care debate last week made its first appearance in the top-five story list in three weeks. One element included political maneuvering over whether to accept the President’s invitation for a bi-partisan meeting.

“Even as Republicans publicly welcome President Barack Obama’s call for a bipartisan summit on health care reform, some privately worry that he might be laying a trap to portray their ideas as flimsy,” said an AP story that quoted Republican consultant John Feehery’s warning that, “This is a clever tactic by the president to try to put the Republicans on the defensive.”  The article added that, “The House’s top two Republican leaders openly questioned Obama’s sincerity and hinted they might skip the meeting if he uses the Democratic bills as the starting point for discussions.”

The No. 4 story, the opening of the Vancouver Olympics, accounted for 5% of the week’s newshole, although by way of comparison, that is less than half the coverage (11%) that greeted the beginning of the 2008 games in Beijing. As is traditionally the case, the story generated the most attention on network news (11%), particularly on host network NBC, which devoted nearly 20% of its news airtime studied to the competition.

Two major events propelled coverage of Iran into the No. 5 spot last week at 5% of the newshole. One was the government’s crackdown on protests slated to mark the anniversary of the Islamic Revolution and the other was the announcement about increased uranium enrichment.

Despite the potentially ominous nature of that development, the February 11 Washington Post reported that Iran was “experiencing surprising setbacks in its efforts to enrich uranium” that experts say “could also delay—though probably not halt—Iran’s march toward achieving nuclear-weapons capability, giving the United States and its allies more time to press for a diplomatic solution.” 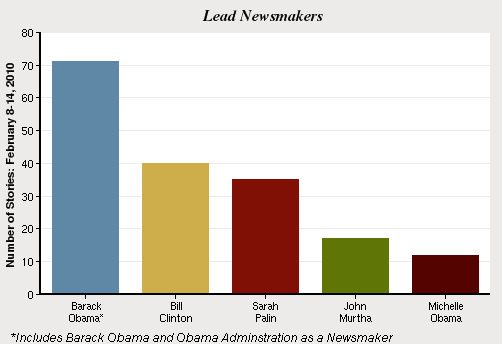 For the week of February 8-14, President Obama was a lead newsmaker in 7% of the week’s stories, down moderately from 9% the previous week. (To register as a lead newsmaker, a figure has to appear in at least 50% of a story.) The No. 2 newsmaker, (4%), was the last Democratic President before him, Bill Clinton, who was treated last week for a recurring heart problem.

The No. 3 newsmaker (3%) was former Alaska Governor Sarah Palin who moved up from the previous week (No. 4 at 1%) as her February 6 speech to the National Tea Party convention continued to spark speculation about her political future. (She also generated some coverage for having an apparent “cheat sheet” with key talking points written on her hand while at the Tea Party event.) This marks at least the ninth time since Palin resigned as Alaska governor last summer that she has made the list of top weekly newsmakers.

The week’s No. 4 newsmaker was veteran and powerful Pennsylvania Democratic Congressman John Murtha (2%), who passed away last week following complications from earlier surgery. He was followed in the fifth spot by First Lady Michelle Obama (1%), who made news last week with her efforts to fight the epidemic of childhood obesity.