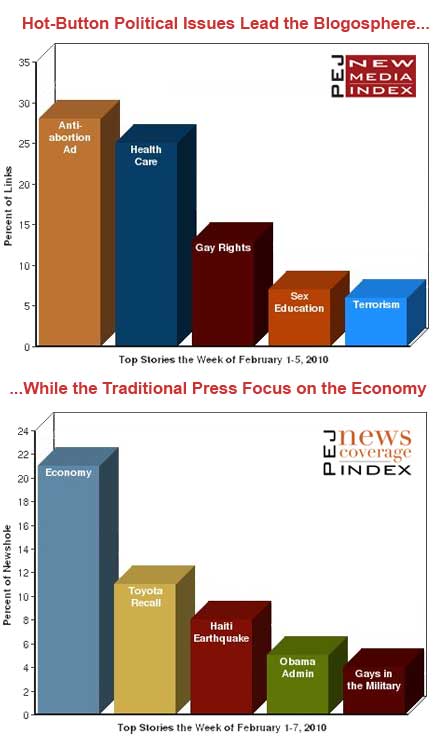 Social media took on a host of controversial issues last week, from abortion to gay rights to health care reform. The online community gave the hot-button topics not only more attention than the mainstream press, but also much more opinionated intensity.

The most discussed subject on blogs was an anti-abortion television commercial featuring college football star Tim Tebow. Specifically, bloggers linked to the February 2 Washington Post column by sportswriter Sally Jenkins, who is admittedly pro-choice, but who voiced support for Tebow and opposition to a number of women’s groups who had been critical of his political stance.

From February 1-5, fully 28% of the news links on blogs were about Jenkins’ article, according to the New Media Index produced by the Pew Research Center’s Project for Excellence in Journalism. Almost all of the bloggers who linked to the story supported her view.

The same topic did not generate much interest in the mainstream press last week. While a few sportswriters and political pundits touched on the issue, it was not among the top ten subjects covered in the traditional press according to PEJ’s News Coverage Index.

On Twitter, the top subject was a different controversial topic-that of gay rights. With 13% of the news-links, most of the focus was on Pope Benedict’s opposition to Britain’s proposed "Equality Bill" which would grant equal rights to gays. The Pope, arguing that the bill would impose "unjust limitations on the freedom of religious communities," called on bishops to fight the bill with "missionary zeal."

Gay rights also elicited commentary in the blogosphere last week, the third largest topic at 13% of the links there. Bloggers discussed the Pope’s position along with Senator John McCain‘s apparent shift on the military "don’t ask, don’t tell" policy. In 2006, McCain said he would consider repealing the policy which would then allow gays to openly serve in the military. But last week, McCain voiced opposition to a repeal despite calls by some military leaders to end the ban.

For the most part, online commenters criticized both McCain and the Pope for their perceived intolerance.

The rest of the stories that gained notice in the blogosphere also dealt with controversial issues.

The second-largest topic was health care reform, with 25% of the links. Specifically, bloggers focused on a BBC report by political scientist Dr. David Runciman who argued that Republicans succeeded in convincing many Americans to oppose health care reform despite the fact that the changes would actually be in their self-interest.

Then, following discussion over gay rights, came a study that suggested abstinence-only sex education classes might be effective (4th at 7%). Fifth, at 6%, was a column by former director of the CIA Michael Hayden who was critical of a number of actions taken by President Obama in dealing with terrorism.

Most of these subjects were dealt with in the mainstream press as well, though not to the same extent as in the blogosphere. Gays in the military was the fifth-largest subject in PEJ’s NCI with 4% of the week’s newshole, health care debate was sixth at 4% and terrorism was eighth at 3%. Sex education did not make it into the top ten.

Instead, the top subjects on Twitter after gay rights were heavily centered on technology.

Second, with 10% of the news-related links, was the continued interest in Apple’s new iPad. This week’s discussion included a story about comedian Stephen Colbert’s introduction of the product at the 2010 Grammy awards ceremony. 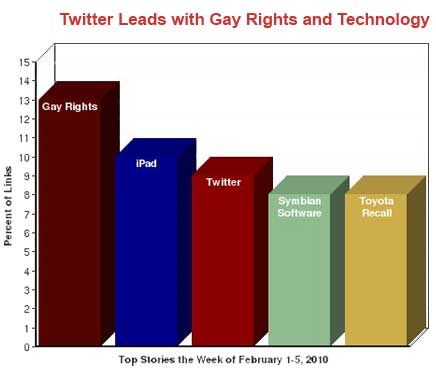 The third topic, at 9%, was Twitter itself. Several stories drew attention including one about Sun Microsystems CEO Jonathan Schwartz who used the social networking site to announce he was leaving the company. Fourth, at 8%, were several stories about the operating system Symbian which powers more than 330 million devices worldwide. That was followed by the Toyota recall of many of their cars due to braking problems supposedly caused by a software glitch at 8%.

Sports columnist Sally Jenkins entered some controversial territory when she came out in favor of Tim Tebow and a television ad that was going to be run during the Super Bowl. Focus on the Family, a well-known anti-abortion group, paid to run the ad and while Jenkins admitted she disagreed with their stance on the issue, her angst was with those critical of the ad.

"Today she [Jenkins} throws to touchdown as she comments on the brouhaha that has erupted around Tim Tebow’s Super Bowl ad," applauded The Reformed Pastor.  "Her point is dead on: those so loudly complaining (NOW, NARAL, and the odious Religious Coalition for Reproductive Choice) are demonstrating beyond question that they are not only intolerant of dissent from pro-choice orthodoxy, but in fact profoundly pro-abortion."*

"Sally Jenkins, and probably millions of other women across America, are starting to face the uncomfortable fact that their own advocates have turned out to be amongst the most hateful people on earth; people who have not only openly spoken about exterminating half the human race, but who have in practice fostered a cult of selfishness and death," wrote Welmer at The Spearhead.

The vast majority of bloggers who discussed the Pope’s position against England’s proposed Equality Bill were harsh in their criticism.

"So Pope Benedict in his luxurious palace in Rome has urged his Bishops in the UK to do all they can to get an opt out from proposed equality legislation and maintain their current right to ban gays from administrative positions in the Roman Catholic Church," summarized Freethinkeruk’s Weblog. "So on the one hand everyone is equal in the eyes of the Church and of God; except gays of course."

"If you don’t want people enacting equality legislation that conflicts with your beliefs, consider having less evil and bigoted beliefs," added electrichalibut.

John McCain faced similar disapproval for his stance opposing the repeal of the ban on gays serving openly in the military, claiming that now was not the time to change policy amidst two wars.

"McCain’s opposition to DADT appears to be his way of opposing anything and everything proposed by the Obama administration," argued Stubborn Liberal. "Once again we see McCain and the Republicans denying equality to another group of Americans. How pathetic!"

Though the iPad did not make it into the top video list the week of its launch, YouTube users made up for it in week two. All five of the most-viewed news video on YouTube last week concerned the January 27 unveiling of Apple’s newest product called the iPad.

After months of speculation, Apple CEO Steve Jobs demonstrated the product’s capabilities at a press conference in San Francisco.

Combined, the five videos of the press conference were viewed more than 3 million times by the end of last week.

A prominent Web tracking site Icerocket, which monitors millions of blogs, uses the links to articles embedded on these sites as a proxy for determining what these subjects are. Using this tracking process as a base, PEJ staff compiles the lists of links weekday each day. They capture the top five linked-to stories on each list (25 stories each week), and reads, watches or listens to these posts and conducts a content analysis of their subject matter, just as it does for the mainstream press in its weeklyNews Coverage Index. It follows the same coding methodology as that of the NCI. This process allows us to compare the New Media commentary, based on the Icerocket list of links, with the commentary in the traditional press.  Note: When the NMI was launched in January 2009, another web-tracking site Technorati was similarly monitoring blogs and social media. PEJ originally captured both Technorati’s and Icerocket’s daily aggregation. In recent months, though, this component of Technorati’s site has been down with no indication of when it might resume.

The Killing of George Tiller Dominates the Blogosphere Debate

How the News Media Covered Religion in the 2008 General Election

How the Media Have Handled Palin’s Religious Faith