For the first time in nearly two months, coverage of the U.S economy led the weekly news agenda, according to the Pew Research Center’s Project for Excellence in Journalism.

During the week of February 1-7, the state of the economy accounted for 21% of the overall newshole, as measured by PEJ’s weekly News Coverage Index, driven to a significant extent by President Obama’s release of his $3.8 trillion budget. That marks a modest increase over the previous week when the economy accounted for 18% of the coverage. But it represents the first time since December 7-13—when the President delivered a major address on job creation—that the country’s financial health was the No. 1 story in the media.

The No. 2 story, at 11% of the newshole, was the mounting set of problems besetting Toyota Corporation—whose president apologized last week. Coverage of the Toyota mess generated almost three times the coverage of the previous week.

The aftermath of the earthquake in Haiti was the No. 3 story, at 8%, remaining on the roster of top-five stories nearly four weeks after the disaster occurred. Last week, however, a good deal of that coverage was narrowly focused on a group of U.S. missionaries charged with illegally trying to take Haitian children out of that country.

For the second week in a row, coverage of the Obama administration (5%) was the fourth-biggest story, with much of the focus on whether Obama was strategically trying to hit the “reset” button on his presidency. And with top Pentagon officials backing the repeal of the “don’t ask, don’t tell policy,” the issue of gays in the military was the fifth-biggest story, at 4%.

The Economy and the Obama Budget

Last week, the economy was the lead story in all five media sectors studied, a rare example of the increasingly diverse media landscape having a shared focus. The economy generated the most attention in the radio sector, which includes talk radio, at 29% of the airtime. The biggest storyline across all media—accounting for slightly more than one-third of the coverage—involved Obama’s proposed budget and its impact on the national balance sheet. 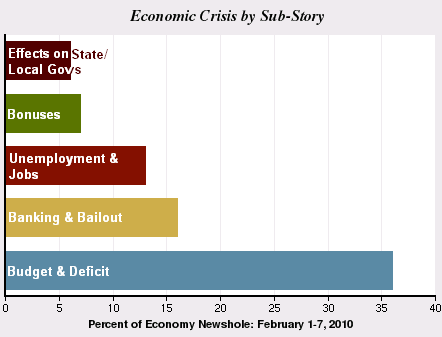 “Some of the sticking points were already emerging as Obama’s spending plan was being released,” reported CNN.com “Obama’s proposal to let the Bush-era tax cuts expire for households making more than $250,000 didn’t sit well with Republicans…Obama has also proposed a partial three-year freeze on non-discretionary spending. The cuts, which Obama says would save $250 billion…might face resistance from those in his own party with that approach.”

On Anderson Cooper’s CNN show, correspondent Candy Crowley came up with her list of budget winners and losers.

“He wants to use a tax imposed on banks to give tax credits to small businesses who hire new people or give pay hikes to existing staff,” she declared. “Also big boost for lower-income families; those tax breaks that came with last year’s stimulus package will carry over for another year…State governments also set to win at least in this area.”

Among the losers in the budgeting, she added, were households making over $250,000, whose tax cuts will expire, as well as the Army Corps of Engineers and NASA.

A report on ABC’s World News Tonight examined the 2,400-page budget document that included $3 billion more for education and additional $19 billion more for the Pentagon with corresponding cuts for the departments of the Interior and Housing and Urban Development—all of which added up to about a $1.6 trillion deficit.

The country’s bleeding balance sheet was another key aspect of the story. “An ocean of red ink, a new budget with a deficit at an all-time high,” is how anchor Diane Sawyer introduced the February 1 newscast. In an accompanying report, correspondent David Muir traced how the nation went from a $236 billion surplus when Bill Clinton left office to its current deficit, driven most recently by the $700 billion bank bailout begun in the Bush administration and the nearly $800 billion stimulus package passed by Obama.

In a dramatic closing flourish, Muir noted that during the two-minute report he had just delivered, the deficit had risen another $5.9 million.

The news only got worse last week for Toyota, which checked in as the No. 2 story at 11% and found its reputation and credibility increasingly under assault for problems that began with accelerator issues, but seemed to expand last week.

On February 5, the Los Angeles Times reported that “a new federal investigation into braking problems with Toyota Motor Corp’s Prius hybrid is just one in a series of possible glitches that may be linked to the vehicle’s complex electronics, including headlights that fail inexplicably, records and interviews show. Thursday, the National Highway Traffic Safety Administration said it had opened a formal investigation into the 2010 model Prius after getting 124 complaints from drivers of a brief loss in braking power, which has been blamed in four crashes, two of which resulted in injuries.”

The Haiti earthquake (No. 3 at 8%) stayed in the news last week, generating the most attention on network TV, where it accounted for 17% of the airtime studied. But more than half the week’s coverage was focused on stories about refugees orphans, most notably the unusual tale of the Baptist missionary group charged with kidnapping 33 children across the border into the Dominican Republic on Jan. 29.

A February 5 story on MSNBC.com reported that the group’s lawyer “has said that the group’s leader, Laura Silsby, knew she couldn’t remove the youngsters without proper paperwork, but he characterized the other nine missionaries as unknowingly being caught up in actions they didn’t understand. ‘They were naive. They had no idea what was going on and they did not know that they needed official papers to cross the border. But Silsby did,’ he said.”

The fourth-biggest story was coverage of the Obama administration (5%) with plenty of talk about how he would handle GOP opposition and whether he would embark on a more populist strategy. But a February 3 Washington Post story examined the “paradox” that helped define “his first year in office.”

“He is a rare president who comes from the middle class, yet people still perceive him as disconnected from it,” the story continued. “Nearly two-thirds of Americans believed that his economic policies had hurt the country or made no difference at all; almost half thought he did not understand their problems.”

The No. 5 story was the hot-button issue of gays in the military (4%), with the big news being the support for a repeal of “don’t ask, don’t tell”—advocated by Obama in the State of the Union Address—from Joint Chiefs of Staff chairman Admiral Mike Mullen and  Defense Secretary Robert Gates. 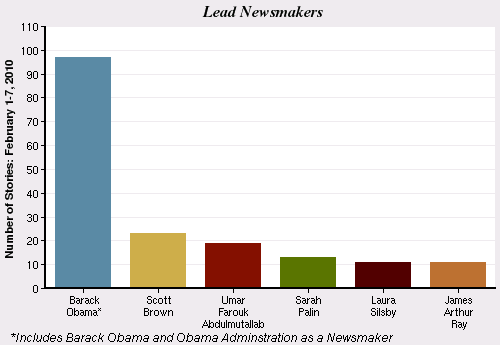 Barack Obama dominated the week’s news, registering as a lead newsmaker in 9% of the stories from February 1-7, a significant number but still down dramatically from the week of the State of the Union address when he was a predominant figure in 21% of the stories—one of the highs of his tenure in office. (To be considered a lead newsmaker, a figure must be in at least 50% of a story.)

The second-leading newsmaker (2%) was Scott Brown, the Republican who won an upset victory in a January 19 special election to fill the seat of the late Ted Kennedy and deprived Senate Democrats of a 60-vote filibuster-proof majority. Last week, Brown was sworn into office. He was followed by Christmas Day bombing suspect Umar Farouk Abdulmutallab (also 2%). The FBI reported last week that he is  cooperating with authorities as the Obama administration’s handling of his case has increasingly become a partisan issue.

A well-established newsmaker, former Alaska governor Sarah Palin, was No. 4 last week (1% of the stories) as she delivered the keynote address at the Tea Party convention in Nashville. Coming in at No. 5 was James Arthur Ray (1%), the so-called “self-help” guru arrested in connection with three deaths at an Arizona sweat lodge ceremony. He was tied by Laura Silsby, the leader of the missionary group charged with kidnapping the Haitian orphans.