With his Presidency weakened and perhaps at a crucial point, Barack Obama’s State of the Union address last week generated substantially more coverage than his two previous major speeches to Congress.

Accounting for 19% of the newshole, the January 27 prime-time talk was the No. 1 story the week of January 25-31, according to the Pew Research Center’s Project for Excellence in Journalism. That far exceeds the 11% of newshole generated by the President’s September 9, 2009 speech pushing for health care legislation and the 10% devoted to his February 24, 2009 address dealing with an economic crisis triggering comparisons to the Great Depression.

PEJ’s weekly News Coverage Index also found more attention to the President by another metric last week. Obama was the predominant figure in more stories last week than at any time since his inauguration a year earlier.  The President was the “lead newsmaker” in fully 21% of the roughly 1,100 stories studied last week. (To be a lead newsmaker, a figure must appear in at least 50% of a story.)

The No. 2 story from January 25-31 was the economy (18%), which featured a number of storylines, including the somewhat contentious re-appointment of Federal Reserve Chairman Ben Bernanke. Another key component was Obama’s announcement of a federal spending freeze, a move made in advance of the State of the Union speech.

One other top-five story last week was very Obama-centric. Coverage of the state of the administration—often in the form of evaluations of the President’s leadership and public standing—was the No. 4 story, accounting for another 7% of the coverage.

The aftermath of the Haiti earthquake was the No. 3 story last week, at 11% of the newshole. And though the scale of the destruction and human tragedy and the prominent U.S. role have kept the tragedy in the headlines, last week’s coverage was down substantially from the week of January 18-24, when Haiti was the top story at 27% of the newshole.

The week’s fifth-biggest story (4%) was Toyota’s move to suspend sales and implement a recall because of problems with sticking gas pedals—a stunning setback for a company that had become the world’s leading automaker.

State of the Union (and Obama’s standing)

Obama’s State of the Union speech last week was the No. 1 story in three media sectors—radio at 21%, online at 21% and network news at 22%. And much of the coverage in the run-up to the crucial January 27 address depicted a President who had lost ground with the American electorate and needed to forcefully re-establish his priorities and leadership.

“It was just a year ago in his first appearance before Congress, he was a new victorious, history-making president,” noted ABC anchor Diane Sawyer on January 25. “Now, this week he’s facing a buzzsaw of critics in his own party and still others who say the C-SPAN transparency in government he promised never happened, not to mention a nation demanding something be done about jobs.”

When the 70-minute speech was over, much of the media analysis focused on Obama’s efforts to hit the “restart” button.

“Reboot…recapture…reset…renew,” were all among the terms in the media maelstrom.

“Obama’s State of the Union address was an unusually candid attempt to recapture the magic of his first months in office—an effort to remind Americans why they admired him in January 2009…” stated the January 28 Los Angeles Times story. “The president offered a long list of federal initiatives, many of which he has proposed before, aimed at creating new jobs or saving old ones. And he repeatedly admonished members of Congress from both parties to stop bickering and to concentrate on getting things done…”

In the partisan punditocracy, at least, there was little changing of minds last week. On CNN, Republican analyst Mary Matalin opined that the speech “didn’t reset anything. There wasn’t one takeaway. There was no framework.” Her husband and Democratic counterweight James Carville argued that “he laid the context of the task that he inherited and he did a very good job.”

A more neutral commentator, former presidential advisor David Gergen, observed that Obama “reshuffled his priorities, but I didn’t think he changed his leadership style,” suggesting further that the President would have to “take charge.”

Two days after the speech, a Washington Post analysis suggested that Democratic legislators in Washington were still pondering, amid uncertainty, their next steps.

“A day after President Obama called on them to renew efforts to pass his ambitious agenda, congressional Democrats remained in disarray…about how to move forward, with at least some pointing at the White House as the cause of the legislative standstill gripping Capitol Hill,” the story noted. “Democrats left town…weighing their next steps on everything from the stalled health-care bill to competing job-creation packages. Before they departed, some criticized Obama for casting blame on the Senate, where moderates felt singled out for ridicule. Others sought to shift the burden the GOP, latching on to Obama’s call for Republicans to share responsibility for governing… Still others said the president’s calls for bipartisanship were wishful thinking…”

One closely related topic (7% of the newshole) focused largely on evaluations of Obama at the one-year mark of his presidency. Somewhat representative of that coverage was a report card session on the Fox News Channel’s O’Reilly Factor on the evening of the State of the Union.

Political pundit Mark Halperin gave Obama a B grade, largely for “saving the economy from going into a Depression.” But he also noted the “overall he’s got a lot of problems” and the “trend right now is obviously downward.”

Democratic strategist Matthew Littman awarded the President a B or B-, saying “it’s been a little bit of a disappointment so far. The health care reform has taken way too long.” Littman added that he would increase the grade to a B+ if Obama ended up signing a health care bill. 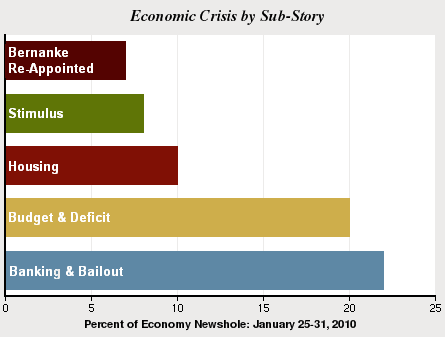 Barely trailing the State of the Union address last week was the state of the U.S. economy (18%), which was the top story on newspaper front pages (23% of the newshole) and on cable news (22%).

One major economy storyline revolved around a proposal Obama discussed in his speech, but released prior to the event—a wide-ranging government spending freeze.

“Under mounting pressure to rein in mammoth budget deficits, President Obama will propose in his State of the Union address a three-year freeze on federal funding that is not related to national security, a concession to public concern about government spending that could dramatically curtail Obama’s legislative ambitions,” stated the January 26 Washington Post story. “The freeze would take effect in October and limit the overall budget for agencies other than the military, veterans’ affairs, homeland security and certain international programs to $447 billion a year for the remainder of Obama’s first term, senior administration officials said Monday…”

Later in the week, speculation that Fed Chairman Ben Bernanke’s re-appointment might be in jeopardy triggered a flurry of Bernanke-in-peril coverage that proved to be perhaps overstated. Despite concerns by members of both parties, he was confirmed on January 28 by a 70-30 vote.

The week’s third-biggest story was the continuing tragedy in Haiti. But at 11% of the newshole, it accounted for less than half the coverage it had generated one week earlier (27%). From January 25-31, the subject received the most coverage on network television (15% of the airtime studied).

Last week’s coverage was divided primarily into straight reporting on news events—including the continuing improbable rescue stories—as well as the issue of aid pouring into that country from outside sources. That coverage included news that the star-studded “Hope for Haiti” telethon raised almost $60 million and the story of a seven-year-old British boy who raised about $100,000 by organizing a sponsored bike ride.

About one-fifth of last week’s Haiti coverage also dealt with an issue that is getting increasingly more attention—the fate of the country’s young orphans and refugees.

“Toyota’s stunning decision to suspend sales reverberated across the country yesterday, with reaction from the government, competitors and rental-car companies,” reported the story in the Columbus Dispatch. “The automaker has taken the drastic step of stopping both sales and production of the affected models, which include the Camry and Corolla sedans, because of reports of accelerator pedals getting stuck…Other automakers might benefit from Toyota’s troubles. General Motors is offering an incentive to Toyota customers, and one analyst says Honda might be in position to gain the most of all.” 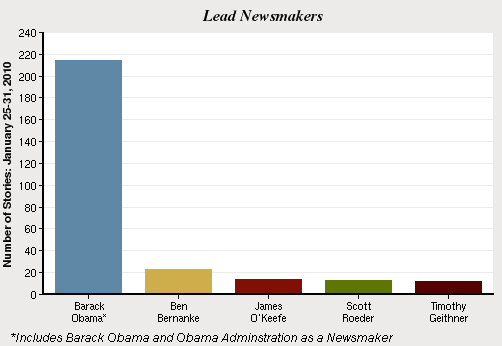 Two other public officials who played key roles in dealing with the economic crisis were also among the week’s top newsmakers. Re-confirmed Fed Chair Ben Bernanke was No. 2, at 2% of the stories. Treasury Secretary Tim Geithner, who took another tough grilling on Capitol Hill over the financial sector bailout, was No. 5 at 1%

The No. 4 newsmaker (at 1%), was Scott Roeder, who was convicted last week in the murder of abortion provider Dr. George Tiller.

The amount of coverage generated by the week’s No. 3 newsmaker, James O’Keefe (lead newsmaker in 1% of the stories), may have been something of an ideological Rorschach Test.  The 25-year-old O’Keefe became a hero to many conservatives last year with his undercover expose of the community organizing group ACORN. Last week, he and three other men were arrested in the offices of Democratic Senator Mary Landrieu for allegedly trying to tamper with her phones.

The O’Keefe arrest was the No. 9 subject in the media overall last week, at 2% of the newshole. But on MSNBC, with a liberal prime time talk lineup, the story accounted for 12% of the coverage studied last week. Conversely, the O’Keefe story accounted for only 1% of the airtime examined on Fox, with its conservative evening lineup. CNN’s coverage level, 2%, was much closer to Fox than MSNBC.