The expanding fallout from the Christmas Day terror plot dominated newspaper coverage last week, according to a special News Coverage Index from the Pew Research Center’s Project for Excellence in Journalism.

From December 28-January 3, stories connected to the attempt to blow up Northwest Airlines Flight 253 filled 23% of the front-page coverage in the 16 papers studied in PEJ’s weekly index—outdistancing coverage of the economy, at 16% of the newshole. Although PEJ’s weekly NCI normally includes more than 50 media outlets in five different sectors, this report focused solely on the news agenda in the nation’s newspaper front pages. PEJ’s index studies papers that represent a mix of geography and circulation categories to get a sense of the differing editorial priorities of different kinds of papers.

As the story evolved, last week’s newspaper coverage of the terrorist incident more than tripled the level from the previous week (7% from December 21-27). Some of that increase came from growing questions about why the system failed to heed warnings about the attacker. But some of the focus shifted as time passed to domestic politics and the impact on the Obama Administration. By the week’s end, the coverage was pointing at a different and dangerous front in the battle against international terror—Yemen.

The economy, a subject which frequently generates major attention from the newspaper sector, was the No. 2 newspaper story last week. The largest component of that coverage was a look at how the recession was impacting business, and that narrative was driven in part by stories in smaller local papers.

The third-biggest newspaper story (7%) was the war in Afghanistan, with the coverage fueled by the bombing that killed a number of CIA operatives. The week’s No. 4 newspaper topic (4%) consisted of stories examining the nation’s educational system.  That was followed closely (4%) by attention to Iran, with the narrative focusing on a new wave of protests in a nation roiled by internal unrest ever since the contested June 12 elections.

One subject that faded significantly from the newspaper news agenda last week was the health care debate. It accounted for only 4% of the front-page coverage, down dramatically from 20% the previous week when the Senate approved a health care bill on a Christmas Eve party line vote. Last week, there was no such Washington-based milestone capturing media attention, a sign, among other things, that the Senate had finally gone into recess and with it, the reporters covering the subject got a break.

The country’s bigger papers—those with circulations above 650,000—devoted the most coverage of the bombing attempt by 23-year-old Nigerian suspect Umar Farouk Abdulmutallab. And early in the week, there were many questions about how he came so close to succeeding despite a series of red flags, including a war

ning to U.S. officials by his father.

On December 28, the Wall Street Journal reported that Homeland Security Secretary Janet Napolitano had “backtracked” on her earlier statement that the system had “worked.”

“Napolitano said Monday that the aviation-security system failed when the young man on a watch list with a U.S. visa in his pocket and a powerful explosive hidden on his body was allowed to board a fight from Amsterdam to Detroit,” the story stated. “The Obama administration has ordered investigations into the two areas of aviation security—how travelers are placed on watch lists and how passengers are screened—as critics questioned how the 23-year-old man charged in the airliner attack was allowed to board the Dec. 25 flight.”

Two days later, USA Today looked at the increasing political heat on the Obama Administration. A story reporting Obama’s statement that a “systematic [intelligence] failure” had occurred noted that he had “interrupted his Hawaiian vacation for the second day in a row to address growing criticism” of “the handling of the case.”

The article also quoted Randall Larsen, director of the Institute for Homeland Security research center, saying, “We are never going to have more tactical warning of an attack than we had in this case. We blew it.”

And by the weekend, the narrative began to look more closely at the country where Abdulmutallab reportedly received al Qaeda assistance, a potential haven for terrorism that has received far less media attention than hotspots such as Afghanistan or Pakistan.

“As the war on terrorism turns toward the Al Qaeda threat from Yemen, U.S. intelligence officials say that the country’s strategic location, lawlessness and instability may make it an even more problematic battleground than Pakistan or Afghanistan,” reported the Los Angeles Times on January 3. “The impoverished nation, already struggling with civil war, has become a far more inviting haven for Al Qaeda fighters than even Afghanistan before the Sept. 11 attacks, the officials say… Obama’s top commander in Iraq and Afghanistan, Gen. David H. Petraeus, arrived in Yemen on Saturday to meet with President Ali Abdullah Saleh and announce that the U.S. will sharply increase its counter-terrorism aid in the coming year.”

With one bombing attempt, another battleground in the struggle against radical Islam had suddenly been injected into the media narrative.

While the larger newspapers in particular devoted themselves to covering the terror plot, the state of the U.S. economy was the top story in the second-tier papers studied (circulation between 100,000 and  650,000) and even more so in the smaller dailies (under 100,000).

Last week’s coverage highlighted a pattern that has emerged in the economic crisis narrative since it began more than 15 months earlier. The local papers tend to cover the big economic story at the grassroots level, looking at the impact in their own communities.

The Day in New London, Connecticut published a January 1 story on how the Greater Mystic Visitors Bureau was trying to bolster tourism in the state during economic hard times.  And a story in the Tampa Tribune highlighted one industry “not feeling the economy’s sting these days.” The Tampa-based Florida Default Law Group, which “processes at least 300 new foreclosure suits a month” was offering “to foreclose on a home at the bare-bones price of $1,200,” according to the article.

The week’s No. 3 story, accounting for 7% of front-page coverage, was the conflict in Afghanistan, marking the highest level of newspaper attention to that topic in the past month. And a major event from the battle zone led the news.

“A suicide bomber infiltrated a CIA base in eastern Afghanistan on Wednesday, killing at least eight Americans in what is believed to be the deadliest single attack on U.S. intelligence personnel in the eight-year-long war…” reported the December 31 Washington Post. “The attack represented an audacious blow to intelligence operatives at the vanguard of U.S. counterterrorism operations in both Afghanistan and Pakistan, killing officials whose job involves plotting strikes against the Taliban, al-Qaeda and other extremist groups that are active on the frontier between the two nations.” (On January 4, the Post reported that one of those Americans originally believed killed was actually a Jordanian intelligence officer.)

The week’s fourth-biggest biggest newspaper subject (4%) featured a mix of stories about the education system that looked at everything from the value of Scholastic Aptitude Tests (SATs) to a University of Southern California program that teaches American culture to international students. Then, also at 4%, came the continued violent protests in Iran, turmoil that has some observers wondering about the stability of the current regime and the advantages that may present for an Obama administration trying to rein in Iran’s nuclear program. 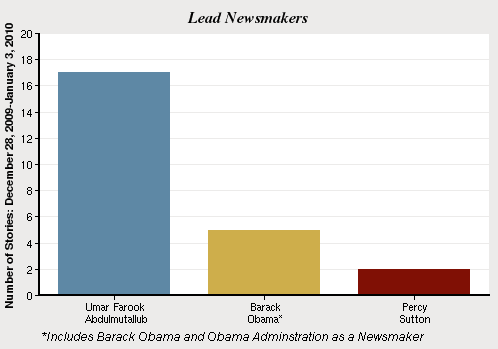 Suspected terrorist bomber Umar Farouk Abdulmutallab was overwhelmingly the top newsmaker the week of December 28-January 3, appearing as a lead newsmaker in 13% of the week’s newspaper stories. (To register as a lead newsmaker, a figure has to appear in at least 50% of that story.) This marks the second straight week Abdulmutallab has been the top headline generator, and it reflects a major increase in prominence from the week of December 21-27, when he registered in 5% of the stories.

Barack Obama was last week’s No. 2 newsmaker, well back at 4% of the stories. He was followed (at 2%) by Percy Sutton, the prominent African-American lawyer and political power player who died at age 89 on the day after Christmas.

About this Special NCI

Typically, PEJ’s News Coverage Index examines 55 different outlets across five media sectors. However, this week’s NCI is a special edition focusing solely on newspapers. Specifically, PEJ examined the front pages of 16 different newspapers from around the country that are a cross-section differing by readership size, geographic location, and ownership.  The percentages are based on "newshole," or the space devoted to each subject in print and online and time on radio and TV. Our methodology for the typical NCI is available here.

Note: At the beginning of every calendar year, PEJ changes the newspapers included in the NCI sample. Because last week included January 1, the selection of newspapers in the week’s sample came from both the 2009 list and the new 2010 list. (See List of Outlets.)