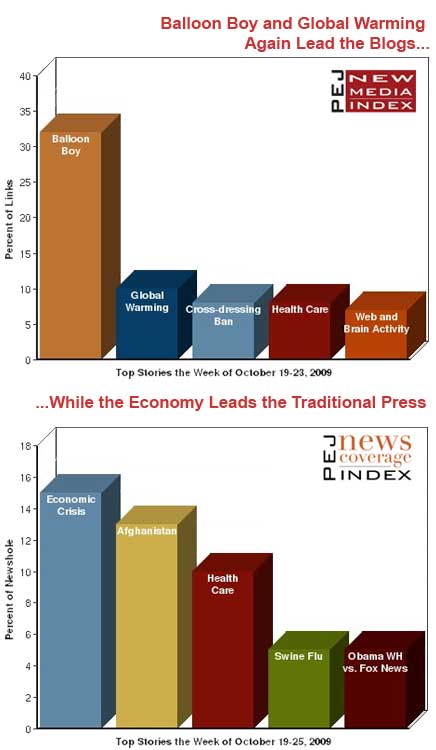 For bloggers, the ongoing fallout from the infamous October 15 "balloon boy" hoax was the top subject last week-and anger permeated much of the online commentary.

From October 19-23, fully 32% of the links to news-related stories from blogs were to the balloon story, according to the New Media Index from the Pew Research Center’s Project for Excellence in Journalism. (That roughly triples the attention (10%) the subject generated the previous week.) News that the parents of  "balloon boy" Falcon Heene would likely be charged with a crime drove interest last week, with bloggers expressing outrage over irresponsible parenting, voicing criticism of media coverage and offering critiques of the reality-show culture that may have spawned the episode.

Three of the five most widely viewed YouTube videos last week were also connected to the balloon story. Two of them featured clips from the October 15 CNN interview that provided one of the earliest clues that the tale might have been concocted.

Also for the second week in a row, global warming was among the top stories in blogs, accounting for 10% of the links-although that was down from 50% the previous week. Skeptics of global warming dominated the conversation in both weeks, most recently reacting to a warning from British Prime Minister Gordon Brown about catastrophic danger if a climate change agreement is not reached by December’s UN Summit. Many bloggers who criticized Brown’s remarks pointed to the same article that spurred the previous week’s discussion-an October 9 BBC report that questioned the science of global warming.

The global warming story, in particular, reveals how a sector of the public, passionate over a particular subject, can quickly assemble online.

The blogosphere’s interest in the balloon boy story and the global warming debate far exceeded that of traditional media last week. The Heene family saga generated only 2% of the week’s news coverage in the mainstream press last week, down from 8% the previous week, according to PEJ’s News Coverage Index. And the subject of global warming did not appear among the top 10 stories in the mainstream news agenda in either of the past two weeks.

The next three biggest stories on blogs were a diverse mix. The third-largest story, with 8% of the week’s links, was a CNN report about a ban on cross-dressing at Morehouse College, an all-male school in Atlanta. A Washington Post poll showing support for the "public option" in health care legislation finished fourth, also at 8%. And a Fox News report about researchers at UCLA who discovered that changes to the brain can be seen in those who use the Internet was fifth at 7%.

On Twitter last week, Gordon Brown’s warning about global warming was the second biggest story at 7%. Deemed more compelling, according to the tracking site Tweetmeme, was news about Twitter itself. A mix of Twitter-focused stories amounted to 33% of the links to news stories. The biggest of those by far was a CNET story about a milestone in the young life of the social networking site-the posting of the five billionth tweet, which quickly earned the nickname "The Pentagigatweet." 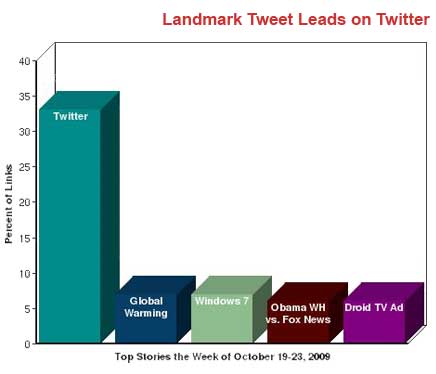 Stories about the release of Microsoft Windows 7 were third also at 7%, while a Fox News report about the feud between the cable channel and the Obama administration was fourth at 6%. (That subject was also among the top stories in the mainstream media last week, accounting for 5% of the newshole in the NCI.)  Fifth (at 6%) was a story about a TV commercial for Verizon’s upcoming phone called the Droid, which will be going head-to-head with Apple’s popular iPhone.

Week two of the "balloon boy" drama began with an October 19 report that local authorities in Colorado were calling the incident a hoax and that criminal charges against the parents, Richard and Mayumi Heene, were likely. Bloggers expressed indignation at the parents.

"I haven’t been able to figure out why this has made me so angry…I am furious that a parent or parents would use their child as a bargaining chip to try and find reality-tv fame," admitted Kim at Thinking Out Loud.*

"How could any loving parent put a kid in the stressful situation of having to lie to the police and to the world?" asked Carrie Kirby at the Chicago Moms Blog. "But does involving your kids in a lie constitute child abuse? Child abuse bad enough to warrant the ultimate punishment for a parent, having your children taken from you?"

Others bloggers pointed a finger at excessive media coverage, even as they continued to focus on the story more intensely than the mainstream press last week.

"What a shame that a tall tale of a child afloat in a silver balloon garnered so much attention while missing women and children, and acts of violence taking place every day, get little more than a line or two of copy-If that," wrote Carmen Dixon at BV Black Spin."

And finally, "I don’t know about the rest of you, but I’m still waiting for the media’s apology for obsessively following this Ballon Boy nonsense," posted ACL at The Unmitigated Word. "Scratch that. The media can skip the apologies…and simply start focusing their attention on pressing matters."

And with reports that the hoax was part of the family’s effort to land a reality show, some commentators also blamed a culture of instant fame.

"I believe there is a larger story here," declared Evan Shaw Blackerby. "In the past fifteen years, we have created the multitude mediums by which we will addict ourselves to the attention others give us…The Heene family’s story is the symptom, not the problem. The parable of the Heene’s is an amazing illustration of how off-kilter our lives can become when our life’s purpose becomes self-promotion and our success is determined by how much attention we garner."

For the second week in a row, skeptics of global warming overwhelmed the online conversation about the subject while those who believe the problem is real remained relatively silent. This time they were reacting to warnings from British leader Gordon Brown about the urgent need for the international community to take action.

"We better watch out, if we listen to British Prime Minister Gordon Brown (renowned climate expert) when he warned of ‘floods, droughts and killer heatwaves if world leaders fail to agree a deal on climate change,’" noted Climate Change – The Facts sarcastically. "We all better listen to Chicken Little-The sky is falling."

"So I guess after the 50 days pass we’ll be done hearing from these kooks," wrote Say Anything Blog. "Of course I doubt that. Even if they were to be consistent, something that would never happen, they’d come up with another catastrophe that could only be saved by giving up our freedom to be great."

According to CNET news, the five billionth tweet was sent on October 19 by Robin Sloan, author and former executive of Current Media. Indicative of the nature of communication tool, the actual five billionth message was in reply to another user and consisted solely of the words, "Oh lord."

"The Pentagigatweet," as it quickly became known in Twitter parlance, was widely celebrated by many users.

The landmark demonstrated just how quickly the Web site has grown. According to Mashable.com, Twitter reached the one billion mark last November and quintupled that number in less than a year.

Three of the top five most viewed news videos on YouTube last week were excerpts of interviews with the Heene family involved with the runaway balloon drama.

The most watched, with more than 2.5 million clicks, was a key moment in the unraveling of the saga: an exclusive interview with CNN’s Wolf Blitzer that occurred the night of the dramatic events. During the segment, six-year-old Falcon responded to a question by saying, "You guys said that we did this for the show."

That statement led some observers to wonder, for the first time, if the entire situation had been an elaborate hoax.