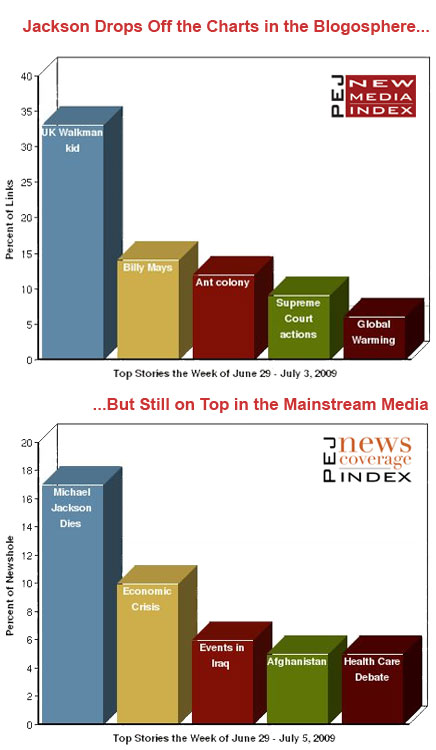 After an initial wave of nostalgia over the death of Michael Jackson, social media moved on to other matters last week. Unlike the traditional press, which remained fixated on the life and death of the King of Pop, that story all but vanished from the links in both blog and twitter posts.

From June 29-July 3, discussion of Jackson accounted for a mere 2% of the links on blogs and other social media, according to the Project for Excellence in Journalism’s New Media Index.  This represents a sharp drop-off from the previous week, which, although it included just the first two days of coverage after Jackson’s June 25 death, garnered 27% of the links.

Instead, online commentators tracked by the social monitoring services Icerocket and Technorati focused on two different post-mortems last week-one for a bygone technology and the other for another recently deceased celebrity, albeit one lacking Jackson’s star power and status.

The top story in social media last week-accounting for 33% of all links-was a report in BBC Magazine about a 13-year-old British boy who was given an original Sony Walkman. He was asked to use the Walkman for a week to help mark the 30th anniversary of that early foray into portable music technology.

Next, at 14% of the links, were tributes to TV infomercial star Billy Mays who died at age 50 (ironically, the same age as Jackson) on June 28. Initially his sudden death was thought to be caused by an injury from a rough plane landing, but later the cause was revealed to be heart disease. 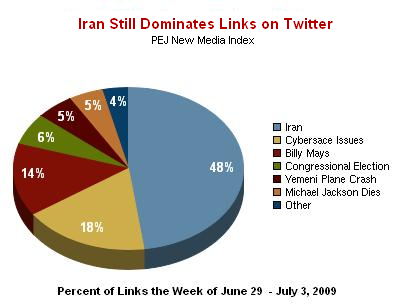 These two stories, which did not show up anywhere in the top-10 list for the mainstream press last week, speak to social media’s predilection toward news about technology and the coming together around less well-known celebrity figures. They also, in the case of Jackson, suggest that social media were not as attracted to the secondary and more troubling strains of the fallout from his death.

On Twitter, the Jackson saga was also passé by last week. A separate look at the Twitter tracking site, Tweetmeme, found the Jackson story amounted to just 5% of the tweets with links from June 29-July 3.  Instead, Twitterers continued their focus on Iran which accounted for fully 48% of the links. And again, the emphasis tended to be on how to marshal support for the protesters in that country.

The mainstream press, on the other hand, dug deeper into the Jackson saga last week, according to PEJ’s News Coverage Index. Filling 17% of their newshole with Jackson coverage, the traditional media continued to commemorate the star’s legacy. But to an even greater extent, they focused on the ominous questions surrounding the role of drugs in this death and potential court battles over his estate and children.

In the social media, however, the rest of the top-five story list was strikingly different.

A BBC Science story about researchers who found that a large ant colony in Argentina is actually part of a large interrelated network of ant colonies, was No. 3, generating 12% of the links. The Supreme Court decision about the New Haven firefighters received 9% of the week’s links while the subject of global warming, spurred by the U.S. House passage of a climate change bill, got 6%,

The British Teen and the Sony Walkman

Reactions to the BBC story about the 13-year-old boy (named Scott) given the Walkman were mostly nostalgic retrospectives from former owners of the device, an early ancestor of the iPod.  "One of the times When It Changed for me was getting my first Walkman."* writes Lyle Hopwood at Peromyscus "I was suited with it-I even took it to bed."

That sentiment was echoed by many, though some displayed generational-driven resentment toward Scott’s critiques.  "And of course, Scott complains about the size, the shortage of music on a single tape, and other inconveniences-but probably because these damn kids today with their music don’t know what us children of the 80’s had to go through…." writes Jim Eltringham of JimEltringham.com.

"Scott’s cool for doing this-my sixteen-year old cousin would certainly not carry a walkman to class for a week, so Scott’s got my admiration for that…"admits moodymuse19 on his Livejournal blog. "But it still bothers me that every kid I meet seems to simply forget things happened before they were born, too."

Perhaps the purest musing came from amnesiablog. The title of the post is simply "What was your first Walkman? (or portable music player for you natives)" with a large picture of a yellow Sony Walkman and a brief post asking people to post pictures of their first Walkman and memories of the device.

The Passing of Billy Mays

The death of boisterous pitchman and late-night TV icon Billy Mays was generally greeted with sadness. "I have to admit that I’ve got a real soft spot for the work of recently deceased commercial pitchman Billy Mays.  Yes, he was loud.  Very loud….But he grew on me, especially once he did his ESPN commercials where he poked fun at his persona.  That’s why I’m wearing blue for Billy today." writes Ron Hogan at Popfi.

Many of the posts, which most often linked to the CNN report of his death, remarked specifically, if also slightly sarcastically, about his thick dark beard. . "Look closely friends….this is the beard on which all others will be judged by.  If God has a beard…it would be as nice as Billy’s….almost." writes the State of Pate.

Overall though, the reaction was largely one of genuine loss for the off-beat infomercial celebrity. "Good-humored, fiercely intelligent, a lover of life, and the best in the world at what he did …" writes John Nolte at Big Hollywood, "if I could snap my fingers and make it so, this would be the life capturing the world’s imagination today."

The most viewed video on YouTube last week is a clip of President Obama giving a White House speech to a group of charity workers when he is interrupted by a cell phone, from somewhere in the crowd, with the ring tone of a quacking duck. With the room breaking out in laughter, Obama departs from his prepared remarks to take note of the unusual sound. The video was viewed over 1 million times through July 3.