In a week when the U.S. withdrew in Iraq and attacked in Afghanistan, when the governor of California declared an economic emergency and the governor of Alaska stepped down, it was Michael Jackson who drove the news agenda.

The dominant story ever since he died on June 25, the fascination with Jackson’s life and death filled 17% of the newshole from June 29-July 5, according to the Pew Research Center’s Project for Excellence in Journalism. That narrative was driven by several storylines. While part of the coverage continued to focus on his legacy as an entertainer and his still vibrant fan base, more ominous strains emerged including growing questions about whether drugs played a role in his death and the prospect of a legal wrangle over his estate and children.

In that respect, the Jackson narrative conjured up one other celebrity death that registered as a major story since PEJ began its News Index two years ago. Media attention to Anna Nicole Smith’s sudden demise in February 2007 was also fueled by the mysterious circumstances surrounding her death and a bruising court fight. (Although the Smith melodrama generated substantial coverage for several weeks, the Jackson story has thus far received about twice as much attention.)

As was also true in the Smith case, the Jackson frenzy has largely been a television story—due in no small measure to the plentiful footage documenting his career. (Last week, concert promoters released video of Jackson rehearsing two days before he died.) The Jackson story filled 30% of the airtime studied on network news and 28% on cable news last week. Within the network news universe, the more feature-oriented morning shows spent more than half their time (56%) on the story compared with 20% in the evening.

Heavy TV attention will likely continue this week (not included in this report) thanks in part to coverage of the memorial service in the Staples Center and the presence of the network anchors who are traditionally dispatched from the studio to cover what are deemed the most newsworthy events.

The No. 2 story of the week, (at 10%) was the economic crisis, driven in part by the fiscal mess in California. Two major overseas events were next. As a result of the pullout of U.S. troops from key cities, events in Iraq filled 6% of the newshole—the most coverage for that story in 2009. And the Afghanistan offensive involving thousands of U.S. Marines made that war the fourth-biggest story (5%), equaling the biggest week of 2009 coverage. The continuing debate over health care legislation, also at 5%, was next.

Last week’s news agenda was also marked by two stories that nearly vanished from the media radar screen. After dominating headlines for several weeks, the unrest in Iran fell to 4%, down from 19% the previous week. And likely to his great relief, the drama surrounding South Carolina Gov. Mark Sanford’s infidelity dropped to 2% of the coverage, down from 11% the week before.

One other politician displayed her knack for making news when Alaska Gov. Sarah Palin stunned the media and political world with her July 3 resignation announcement—triggering frantic speculation about meaning and motives. But because it occurred late in the week, that story accounted for only 3% of the coverage from June 29-July 5.

By all measures, however, Michael Jackson retained command of the media spotlight last week, showing up as the lead newsmaker in more than three times as many stories as the president of the United States.

The King of Pop: a Tangled Narrative

In filling 17% of the newshole from June 29-July 5, the Jackson story almost equaled the previous week’s coverage (18%). But those numbers are misleading. In the first day after his June 25 death, the 55 media outlets studied by PEJ devoted a whopping 60% of their newshole to that event. Last week, the coverage was not as frenzied. Still, the story had an ongoing momentum and a steady trajectory. It accounted for 17% of the coverage in the early part of the week (June 29-July 1) and 18% in the latter half (July 2-5).

While the Jackson story dominated on cable and network news last week, it was not as extensively covered in other sectors. It was the No. 1 story online, but at a relatively modest 12% of the newshole. In newspapers, it was in the No. 3 spot, accounting for 7% of the front-page coverage; in radio it finished as the third-biggest story, at 10%.

Many stories about Jackson last week were a kind of news hybrid that included images from his performances mixed with updates on the investigation into drug use and reports on the looming legal war over his estate and children. That skirmishing over his will was the leading storyline last week, accounting for more than a third of the overall Jackson coverage. But attention to the cause of his death accounted for about another quarter of the coverage as did tributes to his storied career.

A seamier side of the Jackson biography—allegations of child molestation of which he was not convicted—were injected into the narrative last week when Rep. Peter King (R-NY) made news with a video attacking the press for glorifying a “pervert” and a “low-life.”

As it was, emerging themes last week could complicate the Jackson legacy, including mounting evidence of drug use. “Law enforcement sources have told ABC News they discovered the powerful sedative propofol in [Jackson’s] home,” stated a story on the ABC News site. “The drug was just one of many among the pharmacopeia found in his Holmby Hills home…the finding appears to confirm reports by those close to Jackson, 50, that the singer had been abusing prescription drugs.”

That news was echoed on a July 2 “Today Show” report noting that “investigators are digging in, focused on Jackson’s use of prescription drugs… [A]uthorities hauled out bags of medication and needles from Jackson’s home.” Abetting that storyline last week was a Jackson nurse who recounted how the singer had asked her for the powerful anesthetic Diprivan. (Diprivan is a brand name for propofol.)

Another storyline that intensified last week was a looming legal war.

“We begin with the brewing custody battle,” was the introduction into the July 3 “Good Morning America” story.  Correspondent Cynthia McFadden reported that “the King of Pop’s ex-wife Debbie Rowe, is speaking out on custody” by declaring her interest in raising Jackson’s children, even though Jackson awarded his mother guardianship in a 2002 will. The story then aired a CNN interview with Jackson’s brother Jermaine, who dismissed Rowe’s claims, asserting that the will represented “what Michael wanted.”

But even with all the tangled legal and medical storylines likely to play out in the coming weeks, much of the coverage was devoted to remembering Jackson the musician—and to the dramatic spike of interest in his work.

“If it seems as if you’re hearing Michael Jackson music wherever you go, well there’s good reason,” declared Katie Couric on the July 1 CBS newscast. She noted that three of Jackson’s albums have “jumped to the top of the charts,” with almost a half million in recent sales and with “fans download[ing] nearly two-and-a-half million songs over the Internet.”

The Jackson legacy also got a boost last week from a somewhat unlikely source. On his June 29 show, conservative radio talk host Rush Limbaugh defended the singer against speculation about drug abuse. “The media, in this Michael Jackson episode, is a horrible disgrace…besmirching…Michael Jackson’s character,” declared Limbaugh, who once ran into legal trouble over his own prescription drug problem. “We don’t know diddly squat yet.”

The No. 2 story from June 29-July 5 was the economic crisis, which increas 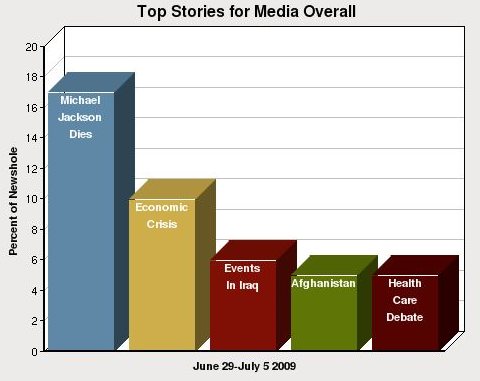 ed to 10% of the newshole, up from 7% the week before. As is often the case, the economy generated the most attention in the newspaper sector, where it was the top story at 17%. A driving theme was the dire situation in the nation’s biggest state.

“An ever-widening budget gap joined with intractable political paralysis to deliver California its biggest fiscal blow in decades on Thursday, when the state controller began printing i.o.u.’s in lieu of cash to pay taxpayers, vendors and local governments,” reported the New York Times on July 3.

Two wars going in different directions were the next-biggest subjects, as the drawdown of U.S. troops from Iraqi cities was the No. 3 story (6%) and the escalation of U.S. activity in Afghanistan filled 5% of the newshole. The continuing health care debate, which was the leading story in radio (15% of the airtime studied), rounded out the top five.

Although Palin’s resignation came too late in the week to register as a top-five story in the Index, it did generate the most coverage of any story (13%) from July 3-5. (The Jackson story also accounted for 13% in that period). Much of the media was caught flat-footed by the announcement, with CNN’s Anderson Cooper summing up that sentiment by noting that Palin dropped “a political bombshell on a sleepy summer Friday.” From there, it became a game of pundit catch-up as commentators scrambled to figure out the implications for one of the nation’s most polarizing political figures and a potential 2012 presidential hopeful.

One CNN prime-time show aired a collage of such commentary. It ranged from “She’s clearly framed her schedule to prepare for 2012” to “There’s some sort of other scandal…or some family issue” that forced her resignation. There was one analyst who wondered “how much of this has to do with her drop in the approval ratings in Alaska” and another who noted that “she can now cash in on her celebrity…and make a lot of money very quickly.”

Whatever Palin’s motives, the Alaska governor, a frequent critic of the media, may well have savored the spectacle of the frantic press scramble in the wake of her dramatic move. 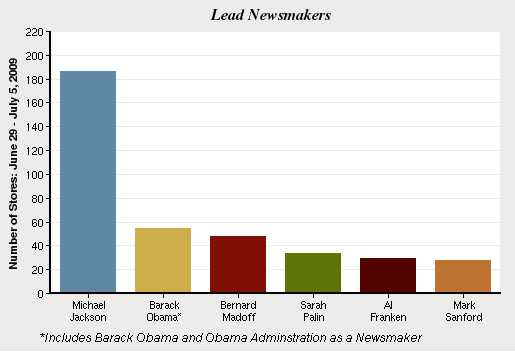 For the second week in a row, Michael Jackson generated more headlines than Barack Obama, showing up as a lead newsmaker in 14% of the week’s stories compared with only 4% for the president. (The previous week, he topped Obama by a margin of 15% to 11%). This marks only the third week since Obama’s inauguration in which someone other than the president was the top newsmaker—the other exception being Supreme Court nominee Sonia Sotomayor.

The week’s third-biggest newsmaker (also at 4% of the stories) was convicted swindler Bernard Madoff, who was sentenced to 150 years in prison. Next came Sarah Palin, a lead newsmaker in 3% of the stories. She was followed by Al Franken (2%), the comedian-turned-Minnesota senator after that state’s high court upheld his razor-thin victory over Republican Norm Coleman.

The Deaths of Michael Jackson and “Neda” Grip the Blogosphere