Last week’s busy and diverse news landscape included an historic bankruptcy filing, mixed economic signals, a deadly air disaster and a murder that inflamed one of the nation’s most contentious social policy battles. But the week’s top story once again demonstrated the star power and sweeping policy agenda of the new President.

Barack Obama’s overseas trip—punctuated by a June 4 address to the Muslim world from Cairo University—filled 20% of the newshole from June 1-7, according to the Pew Research Center’s Project for Excellence in Journalism. That was largely because it was the No. 1 story in the three so-called electronic media sectors of PEJ’s weekly News Coverage Index—radio (28% of the newshole), cable (25%) and network news (24%).

That level of coverage was very similar to the attention Obama generated (21% of the newshole) from March 30-April 5 during his first major appearance on the international stage as President at the G-20 Summit. In both cases, a key storyline was the same—that Obama was unveiling both a substantive and stylistic re-orientation of American foreign policy that at its core, appears to be more oriented to conciliation than confrontation.

Obama also displayed his tendency—evident in the campaign when he consistently generated more attention than his opponents—to be a magnet for media coverage, based in part

on personality and presentation, even in those moments when his message was inherently complex. Last week’s Cairo speech was intended to address a series of dangerous Mideast flashpoints, from the war in Iraq to Iran’s nuclear ambitions to the festering Israeli-Palestinian confrontation. The 55-minute speech was a challenging one to absorb and nuanced in its design.

He also managed to bring attention to subjects about which the public has heard relatively little. Despite their strategic significance, none of those topics has generated much coverage since the beginning of 2009, according to PEJ research. Tensions with Iran have accounted for 1% of the newshole studied, the Iraq war has accounted for 2% and the Israeli-Palestinian conflict has filled 2%, much of that driven by the war in Gaza. (Newshole is the space devoted in print and online and the time studied on radio and television). But an Obama speech encompassing these modestly covered storylines proved to be a major newsmaker.

Obama’s trip was enough to overwhelm the formal dismantling of an American business icon. The week’s No. 2 story, at 13%, was the auto industry in a week when General Motors filed for the biggest industrial bankruptcy in U.S. history and auto executives got a grilling from Congress. Next, at 11%, were other elements of the economic crisis, with a good portion of the news focused on new unemployment numbers that offered something for both bears and bulls. The mysterious crash of an Air France jet that killed 228 people was next, at 10%, followed by the fatal May 31 shooting of controversial abortion doctor George Tiller (8% of the newshole).

Those dramatic developments helped shove the previous week’s biggest story to the sidelines. The polarizing and ethnically tinged battle over Supreme Court nominee Sonia Sotomayor—which accounted for 24% of the coverage from May 25-31—faded from the headlines last week, falling to only 5% of the newshole. 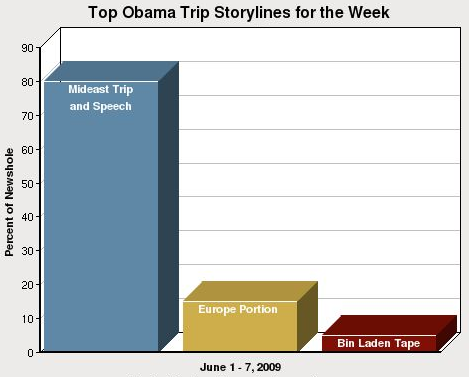 gypt and the Cairo speech. Some was devoted to the latter part of the trip which included stops in Germany and France. And a small portion involved the release of an Osama bin Laden tape clearly timed to coincide with and pre-empt the message of Obama’s Mideast trip.

But the bulk of the coverage was connected to what many observers saw as nothing less than an effort to reframe America’s relationship with the Muslim world nearly eight years after the 9/11 attacks turned “the war on terror” into a household phrase.

“Obama touches down here in this ancient heart of the Arab world Thursday on a critical mission: to try to repair the United States’ relations with Muslims after a decade of violence and recrimination, and to reinforce voices of moderation in a long-volatile region,” is how the June 3 USA Today story outlined his challenge.

The post-speech commentary focused largely on two main areas—Obama’s attempt at reaching out to the Islamic world and what was widely seen as more willingness to press Israel on the peacemaking front, particularly with his criticism of that nation’s settlements policy.

On Anderson Cooper’s June 4 CNN show, international correspondent Christiane Amanpour characterized the speech as “a total tone shift [from the Bush administration]. It was humble, talked about the Koran, did not apologize, injected an air of even-handedness” into the Israeli-Palestinian stalemate. And, she noted tellingly, Obama “did not use the word terror.”

That same evening, the NBC newscast sampled different Mideast views of the address. While the headline in a major Egyptian paper read, “Obama: The One We’ve Been Waiting For,” an Israeli settler described the President as “a great threat to Israeli security.”

Reporting from Israel, NBC news correspondent Martin Fletcher acknowledged that Obama has sent “the toughest message to Israel” of any U.S. President in “recent memory…Israel is afraid now…there could be a clash between Israel and America.”

That message did not sit well with some commentators. “Obama seems not to have learned from previous presidents’ attempts to negotiate an Israeli-Palestinian agreement that no solution is possible without an interlocutor willing to let Israel live in peace,” wrote Michael Barone, senior political analyst for the Washington Examiner. “His attempt to muscle Israel into stopping even natural growth of settlements beyond the 1967 line applies pressure to the party already willing to make peace.”

One thing that almost every analyst could agree on was that when it comes to the Mideast, talk is one thing and tangible progress toward peace is very much another.

“Administration officials acknowledge the speech was the easy part,” said NBC White House correspondent Chuck Todd. Speaking on CNN, Pakistani author Moshin Hamid, added that, “in tone, [the speech] it was extremely promising. The challenge is going to be on actions.”

While the watershed week for the auto industry was outdone in the media by Obama, the continuing trauma in Detroit was still a bigger story the week of June 1-7 (at 13% of the newshole) than the broader economic crisis (11%). The major catalyst for coverage was the GM bankruptcy. But the June 3 Capitol Hill appearance by the heads of GM and Chrysler—when they were grilled over the economic impact of closing thousands of dealerships—was also a significant part of the story.

Coverage of the economic crisis inched up from the previous week, when it filled 9% of the newshole. But overall, the recent trend has been for significant diminished attention to the subject at a time when the story of the economy is considerably more mixed than when signs suggested a free fall. Since May 1, for example, the financial crisis has accounted for 14% of the newshole, about one-third the coverage it generated the first two months after Obama took office.

Last week was a classic example of the more nuanced nature of economic news these days, with the release of bad news/good news employment numbers.

“Employers slashed jobs at a much more measured rate than expected in May, even as the unemployment rate soared above 9 percent for the first time in 26 years, the Labor Department said today,” reported the Washington Post. “According to data that simultaneously show how deep the recession has become and offer hope that it might taper off in the months ahead, a net total of 345,000 net jobs were cut in May—terrible by most standards but the smallest rate of job loss since September. Economists had expected a much worse loss, of as many as 525,000 jobs.”

The No. 4 story was the crash of the Air France Flight 447, which went down in the Atlantic Ocean, triggering a search for remains and clues to the cause of the accident. That was the top story in the online sector, where it accounted for 20% of the newshole.

The fifth-biggest story (8%) was the murder of George Tiller in his Wichita Kansas church, allegedly by anti-abortion activist Scott Roeder. One of the rare providers of late-term abortions, Tiller had been a frequent target of protestors and had already been shot before the fatal attack. The killing was the top story on cable, where it filled 14% of the airtime studied and put the spotlight on Fox News Channel host Bill O’Reilly, a harsh Tiller critic. In the opening monologue to his June 1 show, O’Reilly condemned the shooting, but added that, “When I heard about Tiller’s murder, I knew pro-abortion zealots and Fox News haters would attempt to blame us for the crime…Now it is clear the far left is exploiting the death of the doctor.”

Another crime, the June 1 shooting of two Army privates, one fatally, by a Muslim convert outside a military recruiting center accounted for about one-tenth as much coverage as the Tiller case. Some conservative critics have decried what they saw as a media double standard here, in which the murder of the abortion doctor received much more coverage than what prosecutors are calling a terrorist act against two U.S. soldiers on American soil.

With his overseas trip as the centerpiece, Obama once again reclaimed his usual spot atop the list of newsmakers the week of June 1-7, taking it back from his own Supreme Court nominee. 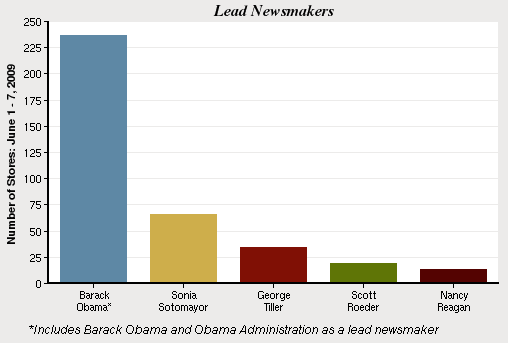 Obama was a lead newsmaker (meaning at least half of the story was about him) in 18% of the week’s stories, his highest level of coverage since March 30-April 5, when he embarked on that G-20 trip. Sonia Sotomayor was the week’s No. 2 newsmaker, at 5%. But that represented a considerable drop from the previous week when she registered as lead newsmaker in 14% of the stories and generated twice as much coverage as Obama.

Murdered abortion doctor George Tiller was the third-biggest newsmaker at 3% and the man arrested for the crime, Scott Roeder, was next at 1%. The week’s No. 5 newsmaker was former First Lady Nancy Reagan (also 1%) who came to Washington for the unveiling of a statue honoring her husband, Ronald Reagan.

Afghanistan War Jumps Back into Headlines

For the First Time, Afghanistan Tops the Week’s News