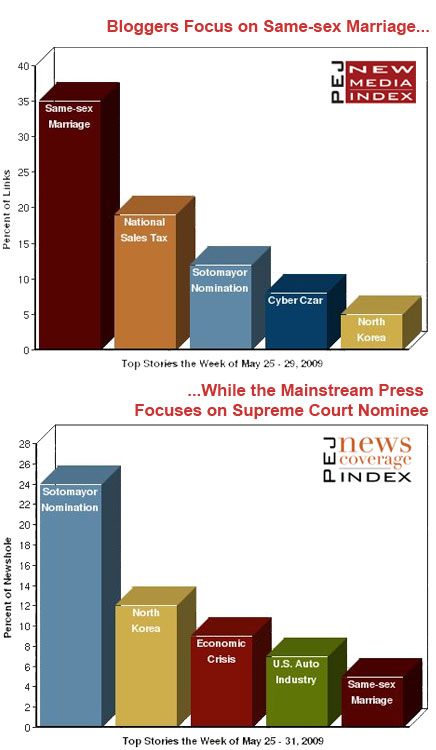 Over the past two months, one issue has emerged as the leading catalyst for online conversation. While debates over harsh interrogation methods and the economic crisis have repeatedly attracted interest in the social media, the subject of gay marriage has bubbled up again and again, in a debate often missing from the mainstream media.

Last week (May 25-29) it was a California Supreme Court ruling upholding a gay marriage ban that re-ignited the social media debate, according to the Pew Research Center’s Project for Excellence in Journalism. With 35% of all the linked to news stories, as studied by the Project’s New Media Index, the ruling dominated online conversation. That marked the fourth time in the last two months that the topic has either been the No. 1 or No. 2 story.

Earlier attention was also triggered by state government actions. First, in early April the Vermont legislature and Washington D.C. City Council approved gay marriage initiatives, followed by the Maine legislature in early May. Then last week’s ruling in California turned in the other direction, upholding that state’s ban on same-sex marriage. The one other driver, in late April, was Miss USA contestant Carrie Prejean who voiced disapproval of same-sex unions in response to a pageant judge’s question.

The intense social media focus on same-sex marriage stands in stark contrast to mainstream press attention. Over the past two months, the topic generated 11% of the links in the blogosphere but filled just 1% of the newshole in the traditional media.

That disparity in coverage illustrates a basic difference between the traditional media’s more hierarchical structure and the online world’s self-motivating communities of interest.

More mainstream media editors must weigh an event or issue against the day’s other news when allocating resources and space, often creating a substantial threshold for stories to gain prominence. In the blogosphere, on the other hand, any event tied to an issue that mobilizes a segment of the social media universe can quickly gain attention and dominate the conversation.

A series of state decisions on Gay marriage-a subject that stirs great passion and interest for some news consumers-speaks to this phenomenon.

Another component to the online discussion is how the debate breaks down. For the most part, the initiatives approving gay marriage sparked more response from supporters who cheered on the movement. The notable exception is the Prejean episode which generated more commentary from opponents who praised her for standing up for her beliefs.

Last week however, was the first one in which the conversation was quite mixed, with both supporters and opponents of same sex marriage contributing to the debate.

From May 25-29, the debate over the Prop 8 ruling overshadowed a number of other subjects. No. 2 in the blogosphere (at 19% of the links) was a discussion of health care triggered by news of a possible new sales tax to fund it. The No. 3 story in social media (12%) was the nomination of the first Latina Supreme Court Justice, Sonia Sotomayor-a subject that topped the mainstream news agenda. That was followed by Obama’s announced intention to appoint a cyber security czar (8%) and the North Korean nuclear test (5%).

Last week not only saw the largest amount of attention to gay marriage in a single week in social media, it was unusual in the diverse response to a court decision that upheld the gay marriage ban but also allowed an estimated 18,000 same-sex couples married in California before the referendum could remain married under the law.

Some opponents of gay marriage applauded the court’s decision to abide by the results of the ballot measure.

"The California Supreme Court got this one correct in that, right or wrong, the people of California got the final say in the matter," judged Wellsy’s World. "I’m not a fan of legislation by judicial fiat, and I’m glad to see that the will of the California voters was upheld."

"Nice!" reacted a commenter usa_usa on Michelle Malkin’s blog. "But they left the existing ‘marriages’ in tact. Wonder what convoluted ‘empathy’ based logic they used to come to that conclusion."

Some commentators, such as Andrew Sullivan of the Atlantic, a supporter of gay marriage, felt the court found the right compromise.

"Politically, this seems to me the perfect decision. It would have been dreadful if voters were retroactively told their valid vote was somehow null and void…It would have been equally dreadful if those couples lawfully wed were subsequently forced into divorce by the court," he concluded.

Others were disappointed at the ruling, charging that it created two distinct classes of gay couples.

"I’ve never thought of equality as being a term with relative meanings depending on the class of people under discussion," wrote Jack Cluth. "And don’t even get me started on the judicial hypocrisy inherent in upholding Prop 8 and yet simultaneously that the 18,000+ same-sex marriages that took place in California are still valid."

"It’s not fair," asserted ecto_gammat in a post that included other crass language. "Don’t get me wrong, I’m really happy that 18,000 are enjoying legal married life, but when can the rest of us enjoy it as well? So 18,000 people are not immoral and destroying the family, but the rest are?"

Some supporters of same-sex marriage expressed a hope that this decision was not the last chapter of an ongoing battle.

"We have followed the legal process and given the sides consideration. We voted, and equal marriage lost. That happens in a democracy," conceded Daniel the California Highway Guy. "Remember the words to ‘We Shall Overcome’: it may take time, but we will eventually succeed."

The top video was a news report of a sex scandal in the Philippines that includes a video depicting intimate relations between one of the country’s most famous actresses and a celebrity doctor. The Filipino news story on YouTube was not in English.

On May 21, MSNBC’s Rachel Maddow showed parts of Obama’s speech condemning the way that President Bush handled suspected terrorists, accusing his predecessor of using a haphazard approach to detention and trials. Maddow then took issue with Obama’s recent support of "Prolonged Detentions" for some suspected terrorists – arguing that it would be a violation of civil liberties.

"How can a president speak the kind of poetry that President Obama does about the rule of law and call for the power to indefinitely, preventively imprison people because they might commit crimes in the future?" she asked. "How can those two things co-exist in the same man, even in the same speech?"