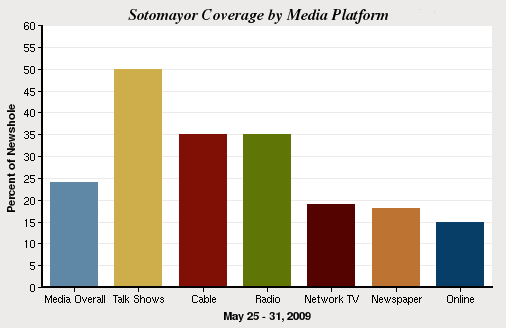 May 26 nomination of Judge Sonia Sotomayor to become the nation’s first Latina Supreme Court Justice not only topped the news agenda last week. As a ritual set piece of Washington, the nomination also offered a clear look at the velocity and ferocity of the new media ecosystem in 2009, one forged by the election, by the rise of social media and cable, and even more than ever defined by speed, political surrogates, diversity and argument.

From May 25-31, Sotomayor accounted for 24% of the newshole as measured by the Pew Research Center’s Project for Excellence in Journalism. That exceeded coverage of North Korea’s nuclear test (12%), the troubled economy (9%), GM’s impending bankruptcy (7%) and a California ruling affirming a gay marriage ban (5%), in PEJ’s weekly News Coverage Index.

So far in 2009, only one story not about the economy or the new Obama administration—the late April swine flu outbreak—has generated more weekly coverage than last week’s historic nomination.

The nominee herself also emerged as a singular presence in the news according to the numbers. Sotomayor was the lead newsmaker in 14% of the week’s stories. (A lead newsmaker must be featured in at least 50% of a story.) That is twice as many as the President who selected her last week (7%), and it marks the first time since his inauguration that anyone exceeded Barack Obama as lead newsmaker in any given week. Until now, no one had even come close.

Race and heritage were major factors in the coverage as well. A PEJ examination of how often her ethnicity was a prominent element found that 40% of the stories about Sotomayor’s nomination referenced her ethnicity. (This means that it accounted for at least 25% of the story). Indeed, Sotomayer’s race and her sense of ethnic identity became a central element of the conflict that would define the coverage in this first week of her nomination.

Even as many analysts we

re predicting a relatively comfortable confirmation margin for Sotomayor, the coverage quickly defaulted to a conflict narrative that offered wildly differing images of the woman—from heroic to hateful—who might be the next Supreme Court Justice. Much of this centered on what is often called the third rail of American politics—the subject of race.

On May 27, ABC’s Good Morning America aired a debate of sorts between two ideological bomb tossers. Liberal James Carville defended Sotomayor as representing “richness and diversity” on the Court. Conservative Ann Coulter branded as “racist” Sotomayor’s now famous 2001 statement that she hoped a “wise Latina woman” would reach better conclusions than a “white male”—a sentiment that proved to be a rallying point for her opponents.

That night, CNN’s John King boiled the battle down to its hottest button. “’Racist’ is the word now front and center in the early debate over the nation’s first Latina Supreme Court nominee,” he declared.

The fight to frame the Sotomayor nomination occurred in cable studios, the blogosphere, on talk radio, in videos and ads, and on Twitter. The story generated the most coverage on radio and cable (both 35%). And within those sectors, the 13 radio and cable talk shows studied devoted half their airtime last week to discussing Sotomayor.

A May 26 Politico story on the feverish Sotomayor spin wars quoted GOP strategist Mark McKinnon on the strategic importance of being first and fast in the media campaign. “The only fighting chance is to be in the ring when the bell goes off,” he said.

The Early Days of the Sotomayor Slugfest

The first wave of coverage after the May 26 announcement featured a number of components. One of those was the up-from-the-bootstraps biography of the Bronx-born Sotomayor that the White House wanted to project.

That biography became the foundation for the debate that ensued, which intertwined the themes of ethnic heritage, judicial temperament and the hyper-intensified politics of Supreme Court nominations.

With the nomination made during a Congressional recess, some of the coverage noted a relatively muted response from some Republican politicians, many of whom faced delicate political issues when considering their opposition. 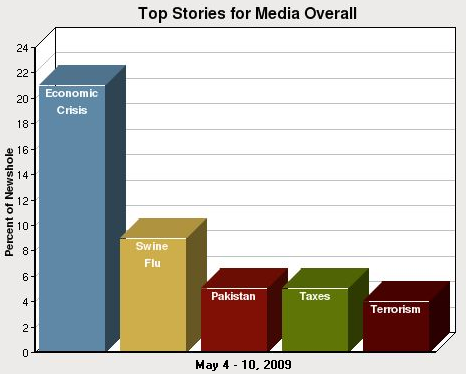 Instead, a part of the political culture that may well be gaining more strength in the new media ecosystem commanded a large share of media attention—talkers, bloggers and twitterers. On NBC’s May 26 newscast, correspondent Pete Williams noted that “Judge Sotomayor is already being called a liberal activist by some conservative groups” while the network played a clip of talk host Rush Limbaugh, in the vanguard of opposition, calling Sotomayor a “reverse racist.”

The battle was quickly joined on talk radio. While Limbaugh told his audience on May 26 that a Sotomayor confirmation would put an “anti-Constitutionalist” on the Court, liberal talker Ed Schultz rejoiced in the perception that Obama had put Republicans “in a pretty tight political spot” by in effect, daring them to oppose a female Hispanic nominee.

On May 27, former GOP House Speaker Newt Gingrich launched a high-profile attack on Sotomayor with a Twitter post on her “wise Latina woman” statement.  “A white man racist nominee would be forced to withdraw,” Gingrich declared. “Latina woman racist should also withdraw.”

The same day, conservative blogger Michelle Malkin weighed in another angle of the identity question. “Republicans are not allowed to mention Sotomayor’s ethnicity lest they be branded bigots, but every Democrat on cable television harped on her multicultural ‘diversity’ and ‘obstacle’-climbing,” she wrote.

While the conservative talk and social media machinery was moving in that direction, liberal bloggers were busy trying to undermine charges that Sotomayor would practice identity and empathy politics on the High Court. On May 27, Salon.com blogger Glenn Greenwald cited testimony from Judge Samuel Alito’s confirmation hearing in which the nominee said, “When I get a case about discrimination, I have to think about people in my own family who suffered discrimination because of their ethnic background or because of religion or because of gender.”

The liberal Talking Points Memo blog unearthed this quote from President George H. W. Bush about his Supreme Court nominee, Clarence Thomas, in 1991: "He is a delightful and warm, intelligent person who has great empathy and a wonderful sense of humor."

For its part, some early mainstream media coverage also reinforced a key message coming out of the Obama White House—that Sotomayor was a pragmatic moderate rather than a liberal ideologue.

That was evident in a May 26 Reuters.com story that cited some legal experts’ view that “Sotomayor does not appear to be either particularly liberal or conservative on business issues—resulting in a patchwork of decisions based more on the merits and facts of the cases than an ideological approach to the law.”

The May 27 Los Angeles Times featured a headline “A Latina in the Middle,” that seemed to refer to both her prominent role in the spotlight and her judicial philosophy. The story quoted former Yale Law School Dean Judge Guido Calabresi saying, “We have some judges on the left end of the spectrum. Sonia’s well in the middle. . . . Activism has a meaning—judges who reach out to decide things that aren’t before them. Sonia simply doesn’t do that.”

One other storyline that no doubt heartened Sotomayor supporters also emerged in the first few days of coverage—the idea that Republicans had to tread carefully in taking on an historic nominee who also represents a fast-growing and crucial demographic group.

A Reuters story posted on Google News on May 27 said that, “With midterm elections around the corner in 2010, the nomination poses a predicament for Republicans—how hard to go after her at a time when party leaders would like to stem the exodus of Hispanic voters from their ranks.”

The next night, the conservative-leaning Bill O’Reilly raised the issue on his Fox News Channel while talking about the racism charge leveled by Gingrich: “I think if [Senate Republicans] take that tone that the Speaker [Gingrich] is taking, it’s going to damage the Republican Party” with crucial Hispanic voters.

Toward the end of the week, the White House fueled the continuing narrative over the controversial 2001 speech when spokesman Robert Gibbs told reporters on May 29 that, "I think if she had the speech to do all over again, I think she’d change that word.”

Finally, another piece of the media ecosystem entered into the narrative that could ultimately have considerable impact on the Senators who will decide Sotomayor’s fate—the proliferating public opinion poll.

“Americans back President Barack Obama’s nomination of Sonia Sotomayor…by a margin of two to one, according to a poll released Friday,” stated a May 29 AFP story posted on Yahoo! News. The Quinnipiac University survey found 54% favoring her nomination with 24% opposed and 22% undecided.

As the survey stories were quick to point out however, while Democrats solidly backed Sotomayor, Republican respondents opposed the pick by almost two-to-one. 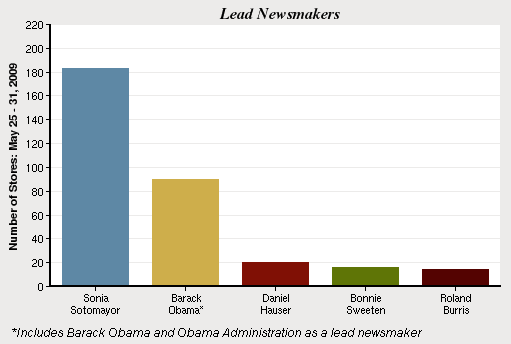 As a lead newsmaker in 14% of last week’s stories, Sotomayor generated twice as much coverage as anyone other than Obama in the four months since he was inaugurated. (The next highest total was 7% for Rod Blagojevich the week he was removed as Illinois governor.)  Obama was a lead newsmaker in 7% of the stories from May 25-31, his lowest total since he took office.

The No. 3 newsmaker from May 25-31, at 2%, was Daniel Hauser, the 13-year-old boy at the center of a legal dispute over his treatment for cancer. Next at 1%, was Bonnie Sweeten, the woman arrested in Florida for falsely claiming that she and her daughter had been abducted. The fifth-biggest newsmaker, at 1%, was Roland Burris, the man chosen by Blagojevich to fill Obama’s Senate seat who was heard on wiretaps discussing his possible appointment with Blagojevich’s brother.

The No. 2 story from May 25-31 was the North Korean detonation of a nuclear weapon and the global fallout. That story got the most coverage in the internationally oriented online sector (17%) where it was the No. 1 subject. Next came coverage of the economic crisis, which dropped to 9% from 17% the previous week. A closely related story—the troubled US auto industry—was the No. 4 story (at 7%), with the narrative driven by GM’s looming bankruptcy. The fifth-biggest story of the week was the same-sex marriage issue (5%) with the California Supreme Court upholding the results of a referendum which banned such unions.

The raging debate over such anti-terror efforts as harsh interrogation and the Guantanamo Bay facility fell to No. 6, at 3%. The previous week it had been the top story in the country, filling 19% of the newshole.

The Spill Leads the News in a Balanced Week

Hispanics in the News