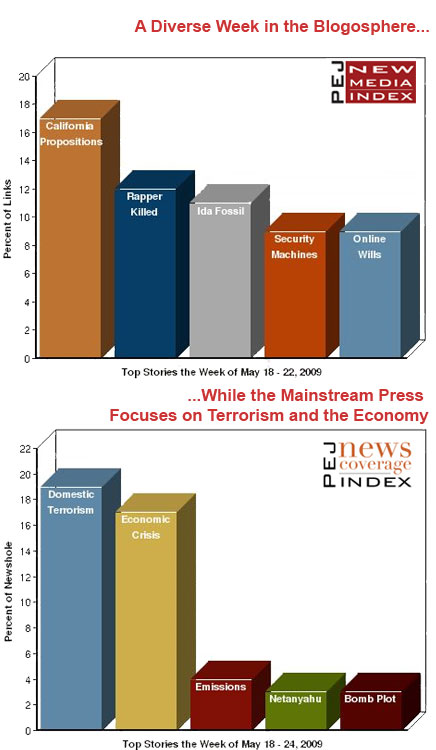 The widely diverse interests of social media shone through last week, as a mix of topics-the fiscal mess in California, the murder of a rapper, an ancient creature, and a virtual strip search-all shared in the conversation.

From May 18-22, the No. 1 story in social media was the California financial crisis and the voters’ rejection of ballot initiatives designed to deal with the problem. That subject generated 17% of the week’s links, according to the New Media Index from the Pew Research Center’s Project for Excellence in Journalism. Conservative bloggers in particular honed in on the subject, claiming the votes were a rejection of higher taxes and bigger government-and a message to politicians throughout the country.

The second largest story on Icerocket, receiving 12% of the links, was the May 18 shooting death of rapper Dolla. Fans used the Web as a way to honor his memory and some pointed out the odd coincidence that Dolla had started his own Twitter feed hours before his untimely death.

Close behind (at 11%), was the unveiling of a 47-million-year-old fossil nicknamed "Ida" that scientists claimed was an ancestor of modern primates. Bloggers discussed whether the fossil was the so-called "missing link" that proved the theory of evolution or even if the concept of a missing link was realistic considering the complexity of the theory of human evolution.

The fourth largest story (at 9%) was a CNN.com report about screening machines at some airport security stations that take "whole body images" of passengers. Some privacy advocates, led by the Electronic Privacy Information Center, believe the machines reveal "naked" pictures of passengers and are planning a campaign against their use.

Another CNN.com report commanded 9% of the links as well. This one was about Web companies, such as Legacy Locker, that allow online users to bequeath their online accounts, passwords, and Web sites after they die.

The focus of the traditional press last week was substantially different from that of the blogosphere, according to Icerocket’s Web tracking site. For the mainstream media, the top story was the debate over anti-terrorism strategies such as the closing of Guantanamo Bay and harsh interrogation techniques. The No. 2 story was the economic crisis, which included the problems facing California. This was followed by President Obama’s plan to regulate auto mileage standards, the meeting between Obama and Israeli Prime Minister Benjamin Netanyahu, and the disruption of an alleged terrorist plot hatched in New York against Jewish targets.

On May 19, California voters went to the polls and defeated five budget measures supported by Governor Arnold Schwarzenegger and other lawmakers. The measures, aimed at restoring fiscal discipline, would have either extended tax hikes or capped state spending.

Most of the attention in the blogosphere came from conservatives who felt the results reflected a strong anti-tax-and-spend sentiment.

"Us Californians went to the polls last night and told the state enough with taxes to keep your greedy grubby hands filled with cash," described Curt at Flopping Aces. "The tax revolt in this state has begun, and I honestly never thought I would see the day."*

"The California Assembly wouldn’t restrain spending," warned Alaphia at Creating Orwellian World-View by Machiavellianism. "Therefore California’s out of control spending is but a forewarning of where national Democrats that control Congress are taking the rest of the nation. As California goes so goes the nation."

While few bloggers voiced support for the failed propositions, some commented on California’s unusual practice of using referenda to resolve budget issues.

"What it really all boils down to, is that we want tons of stuff that we just can’t (or won’t) pay for, and when it comes to fixing problems that were a direct result of our own handiwork, we blame the politicians," surmised demkid at The Bright Coast. "Do we really trust the knowledge of our fellow citizens more so than the representatives we elected to serve?"

"California: An example of direct democracy gone haywire," he concluded.

Death of a Rapper

The Web filled with tributes after the shooting death of rapper Dolla at a Los Angeles shopping mall on May 18. Dolla, whose real name is Roderick Anthony Burton II, was an up-and-coming 21 year-old star when he died.

"Damn shame!!! All I have to say is be careful out there!! R.I.P. This one is for you…" wrote Nykotyne before posting a YouTube video of one of Dolla’s songs.

"It’s just a coincedence that he had only joined Twitter hours earlier under the username dollagang," observed Kevin at Time to Tweet. "Thousands of fans are now tagging his account and sending on their regards."

"It would seem that this may be the first time a relatively famous person that actually uses Twitter (if only for a day) has passed away," noted ThunDi Technology Blog. "And like a MySpace or Facebook wall, this is now another way for fans to pay respect."

Evolution became a hot topic of conversation after scientists at the American Museum of Natural History in New York revealed the remains of a 47-million-year-old, lemur-like creature they nicknamed Ida. The fossil was in great condition and some experts claimed that this discovery could be the "missing link" in the chain of evolution between primates and distant relatives.

The claims were largely not well received, with criticism in this case coming from multiple levels.

Bloggers such as Defend the Word were not convinced of the milestone.

"Is ‘Ida’ a ‘missing link’ we have all been waiting for?" the blogger wrote. "Despite the hype, Ida looks nothing like a transitional ‘apeman,’ instead looking quite like a modern lemur…Thus, rather than an apeman-like missing link that some media sources have irresponsibly implied, the real story is quite underwhelming and should in no way faze creationists."

At the same time, some defenders of evolution took issue with the concept of a "missing link."

"The term ‘missing link’ is not used in science," proclaimed Cliff Martin at Outside the Box. "It is a meaningless cliché typically forwarded by anti-evolutionists who quite clearly have no clue…if evolution is true, there is no such ‘missing link’. Instead, we should expect to find thousands upon thousands of transitional forms interconnecting all living species."

The most popular was a May 18 interview on the Fox News Channel where Ventura and host Sean Hannity clashed over a number of political issues including the legacy of President Bush and the federal deficit.

Then at the fifth spot was a May 18 appearance of Ventura on the talk-show The View where he clashed with host Elizabeth Hasselbeck over waterboarding and torture. "You give me a waterboard, one hour, and Dick Cheney and I’ll have him confessing to the Sharon Tate murders," insisted Ventura.

The Tucson Tragedy Dominates on Blogs