With two of the nation’s more politically polarizing figures helping fuel the narrative, the U.S. campaign against terrorism was the No. 1 story last week.

The news included the president’s change of heart in opposing the release of photos of prisoner abuse by U.S. troops as well as a highly charged Congressional hearing on interrogation techniques. But some coverage also focused on the second and third leading newsmakers of the week—House Speaker Nancy Pelosi, who was embroiled in a controversy with the CIA over waterboarding briefings, and former Vice-President Dick Cheney, who continued his public campaign against Barack Obama’s policies.

Terrorism coverage accounted for 22% of the newshole from May 11-17, according to the Pew Research Center’s Project for Excellence in Journalism. But the story was much bigger on the ideological, debate-oriented talk shows on radio and prime-time cable. Indeed, terrorism filled 50% of the airtime for the 13 talk shows studied by PEJ last week. Those discussions were doubtless driven in part by a political dynamic: Cheney is deeply disliked by many liberals and Pelosi provokes the ire of many conservatives.

Ever since the April 16 release of memos detailing the Bush administration’s harsh interrogation techniques—triggering an intense and often partisan debate over the practice—coverage of terrorism has increased dramatically. Last week marked the second time in a month the subject was the top story. And in the period from April 13-May 17, terrorism issues have bee

n the second-biggest topic (11% of the newshole), trailing only the economic crisis.

Last week, the economic meltdown was the No. 2 story at 12%. But that represents a significant drop from the previous week when the release of the much-awaited bank stress tests drove the coverage. Two other subjects integral to the nation’s economic well-being—health care (6%) and the auto industry (5%)—also made the list of top stories.

With Obama’s meeting with industry leaders as the backdrop, the health care policy debate generated its biggest week of coverage since the PEJ began its News Coverage Index in January 2007. And the news from Detroit was sobering as General Motors and Chrysler announced the closing of about 2,000 car dealerships across the nation.

Coverage related to the nation’s anti-terrorism policies led four of the five media sectors last week and was especially dominant in the two sectors that include talk shows, cable news (42% of the newshole) and radio (32%).

In mid-week, Obama generated major headlines by announcing a dramatic turnabout on the question of whether photos showing abuse of U.S.  prisoners should be made public. 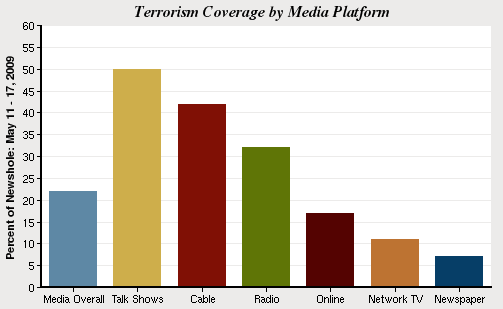 “President Barack Obama will try to block the court-ordered release of hundreds of photos showing U.S. troops allegedly abusing prisoners, reversing his position after military commanders warned the graphic images could stoke anti-American sentiment and endanger soldiers,” reported an Associated Press story posted on Yahoo! News on May 13. “The pictures are said to show mistreatment of detainees at locations in Iraq and Afghanistan.”

That decision was announced the same day that former FBI agent Ali Soufan, who participated in interrogations of terrorism suspects, made news by telling Congress that harsh interrogation techniques were a “mistake.” A May 13 MSNBC report quoted Soufan testifying that those methods represented “an exercise in trying to gain compliance rather than eliciting cooperation… A major problem is that it is ineffective.”

As the debate over the treatment of terror suspects raged, two high-profile politicians found themselves in the middle of the fray. Former Vice-President Cheney continued to make the media rounds functioning as, in the words of a Washington Post article, “the most visible and controversial critic of President Obama’s national security policies.”

“Typically, former presidents and vice presidents hold their tongues when discussing their successors, especially so early in a presidential term,” noted ABC’s Jake Tapper on the May 13 “Good Morning America” broadcast. “Cheney is on the ‘Barack Obama is making us less safe’ campaign.”

On the other end of the political spectrum, House Speaker Pelosi stepped into the spotlight by accusing the CIA of “misleading” Congress about harsh interrogation tactics during a 2002 briefing, an allegation that created a political firestorm in Washington and on the talk airwaves. Pelosi did acknowledge last week that she learned about waterboarding in 2003.

“Pelosi’s out there flailing around today with version 5.0 on torture and what she knew and when she knew it,” declared conservative radio host Rush Limbaugh on May 14.

Across the dial, liberal host Ed Shultz was focusing on the former veep. “Just listen to Cheney,” he declared. “He’s running like a scared rabbit. He’s trying to taint the jury poll right now. That’s why he’s doing all those interviews.”

Both sides had their targets of choice last week as the increasingly polarized and personalized tone of the terrorism debate helped ratchet up the coverage.

Economic Concerns Lead the Rest of the Week’s News

One week after the stress tests measuring the economic health of banks helped drive the economy to the No. 1 spot (at 21%), coverage of the financial crisis dropped to 12% from May 11-17. The only media sector in which the economy was the top story last week was newspapers, which devoted 15% of the front-page newshole to the subject.

The lead storyline, at about one-fifth of the economic coverage, was the banking and financial sector, with much of that coverage focused on Obama’s efforts to legislate reform of the credit card industry. The next biggest economic theme was the stimulus package, with the news that only a small percentage of the stimulus money had been spent so far. Next came coverage of the housing market, where amid some signs of a turnaround, the price of real estate continued to fall.

The week’s No. 3 story, at 6%, was the health care debate. And the headline maker was a May 11 White House summit of industry heavyweights that produced both news and doubts.

“President Obama engineered a political coup on Monday by bringing leaders of the health care industry to the White House to build momentum for his ambitious health care agenda,” stated the May 12 New York Times. And while the story noted that  “doctors, hospitals, drug makers and insurance companies voluntarily offered $2 trillion in cost reductions over 10 years,” it offered the caveat that, “If history is a guide, their commitments may not produce the promised savings.”

This marked the single biggest week of coverage for health care policy in the past two years. The second-biggest week—4% of the newshole from March 2-8, 2009—was driven by another Obama-convened health care summit.

The No. 4 story (5%) was more grim news for the auto industry with some reporters detailing the trickle-down impact on communities when dealerships close their doors.

One Pennsylvania Chrysler dealer told the Pittsburgh Post-Gazette that, “We’re involved with three local high schools out here—all the softball teams and Little League teams. We’re involved with the fire department…It’s all volunteer out here.” The Kansas City Star quoted another dealer lamenting that, “People don’t buy cars from Chrysler, GM or Ford. They buy them from their neighborhood dealer.”

The fifth-biggest story from May 11-17 was the war in Afghanistan, at 4%.  The coverage focused on the dramatic decision to replace the top U.S. commander, Gen. David McKiernan, with Gen. Stanley McChrystal. The media narrative depicted this move as a major strategic shift to try and reverse the deteriorating situation on the ground with a greater emphasis on counterinsurgency tactics. 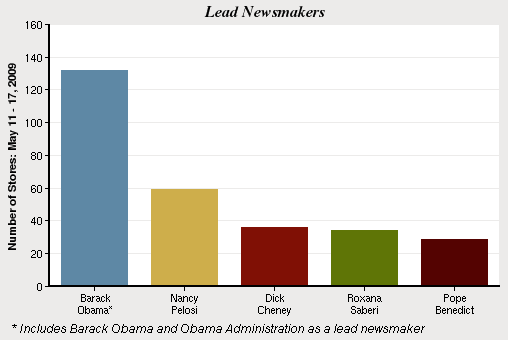 Barack Obama was again the week’s leading newsmaker, registering in 10% of the stories from May 11-17, up modestly from 8% the previous week. Speaker Pelosi’s credibility dustup with the CIA made her the No. 2 newsmaker (4%) followed by the very visible Cheney at 3%.

The fourth-biggest newsmaker (at 3%) was Roxana Saberi, the Iranian-American journalist who was freed from an Iranian jail after being accused of spying. And No. 5 was Pope Benedict (2%), whose high-profile visit to the Holy Land illustrated just how difficult it can be to navigate the simmering political, national and religious conflicts in that region.