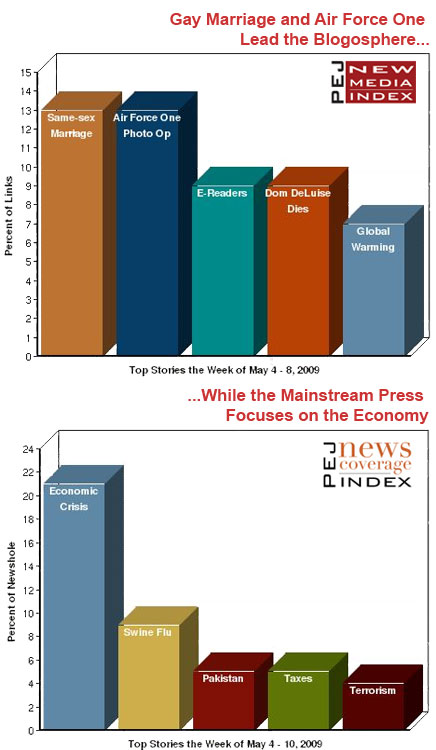 In a reflection of the often wide-ranging conversation in social media, the online debate last week focused on a diverse news agenda that ranged from same-sex marriage to a botched photo op and from the state of the news industry to the death of a comedian.

The online conversation was unusually balanced, as four different topics generated between 9% and 13% of the links last week. It was also markedly different from the mainstream media agenda, which focused primarily on threats from the economy, the flu and the Taliban.

The top story for bloggers and social media last week was one that had ranked highly in two out of the previous four weeks–same-sex marriage. From May 4-8, 13% of the links by blogs and social media sites focused on the issue, according to the New Media Index from the Pew Research Center’s Project for Excellence in Journalism.

The catalyst was last week’s vote by Maine’s legislature to allow same-sex couples to marry and the Washington, D.C. city council’s move to recognize gay marriages performed in other states. Online, the reaction was overwhelmingly approving of the decisions (as it was in early April when the topic was also the lead story). The traditional press barely covered the topic, devoting less than 1% of the newshole to the story.

The second largest story online, also with 13% of the week’s links, was a continuation of one of the blogosphere’s top stories from the previous week. On April 27, a jet that is often used by President Obama as Air Force One flew low over Manhattan as part of a planned photo shoot. This flyover startled many New Yorkers, who experienced some 9/11 déjà vu, and drew tremendous criticism. Last week, a story in the New York Post reported that the photos would not be released to the public, rekindling outrage among online commentators.

Technology then came into the social media mix through a New York Times article about large screen electronic reading devices, such as Amazon.com’s Kindle, which may bring hope to the struggling newspaper industry. As iPods helped a beleaguered music industry, the article at 9% of the links suggested these e-readers could help revive interest in the print editions of magazines and newspapers.

A similar amount attention was paid to the passing of comic actor Dom DeLuise at the age of 75 (also at 9% of the links). DeLuise, perhaps best known for his work in films directed by Mel Brooks, died after a year-long bout with cancer. Many bloggers were saddened by the passing and reminisced about their favorite DeLuise roles.

Rounding out the top five, at 7%, was the issue of global warming with most of the links connected to a May 1 article in the New York Times reporting that some environmental groups have been researching to see if another term for "global warming" would resonate better with citizens and voters.  "Climate change," according to the groups, may be an easier sell.

The traditional press last week focused most of its attention on a different set of issues. About a fifth of the newshole (21%) was devoted to the economic crisis and specifically the report cards for troubled banks. This was followed by less intense attention to the swine flu (at 9% of the week’s newshole), violence in Pakistan (5%), proposals by Obama to go after offshore tax havens (5%), and continuing conversation over the legal issues surrounding  harsh interrogation techniques (4%).

These are some of the findings of the PEJ’s New Media Index for the week of May 4-8. The index is an effort to monitor the content appearing in new media platforms. The biggest element of this Index is what appears in the more than 100 million blogs and other social media web pages concerned with national news and public affairs tracked by two monitoring sites, Technorati and Icerocket. Both track the commentary online by identifying what news stories bloggers and other websites link to. Each weekday, PEJ captures the top linked-to stories and analyzes their content. It then compares those findings with the results of its weekly analysis of more mainstream media, the weekly News Coverage Index. The Project also tracks the most popular news videos on YouTube each week.

The pendulum in recent weeks has swung back and forth in the online debate over same-sex marriage. Vermont’s vote to legalize it drew applause from bloggers the week of April 6-10.  Two weeks later, though, opponents of same-sex marriage drove the conversation, expressing support for Miss California, Carrie Prejean, who declared her objection to gay marriage during the question and answer portion of the Miss USA pageant.

This past week, the May 6 vote by the Maine legislature to allow gay marriage provided another opportunity for supporters to laud what they saw as progress on the issue.

"This is fantastic news for the people of Maine," declared Shane at Land of Savages. "These past several weeks have been ones of terrific highs for the gay rights movement. Iowa’s court decision, Vermont’s legislative action, New Hampshire…and now, Maine."

"The weather sucks, but gay people can get married!" exclaimed Catherine Bracy, an administrative director at Harvard University.

The May 5 vote by the D.C. city council to recognize same-sex marriages performed in other states also drew praise from much of the online commentators. Some bloggers chose to focus on the vocal opposition by African American ministers and the one council member who voted against the bill-the city’s controversial former mayor Marion Barry.

"The article [in the Washington Post] is worth a read, in part because it brings out the tensions between the civil rights aspects of the struggle and the church-based opposition," declared Betsy McKenzie at Out of the Jungle. "Poor Marion Barry is torn in the middle of all this…he is nearly ripped in half between representing the majority of his constituents, who do oppose gay marriage, and hewing to his civil rights roots."

Another news event on May 5 initiated more irate directives: The New York Post quoted an unnamed White House aide as saying there were no plans to release the pictures taken as part of the controversial Air Force One flyover New York.

"When Obama — or any of his minions — talks about transparency, he’s wielding doublethink to the fullest possible degree," argued There’s My Two Cents in response to the Post story. "And we have another three and a half years of this garbage. Ugh."

"It looks like all we’ll get for the tax money Comrade Obama blew on his Ground Zero photo op will be a few screams," added Van Helsing at Moonbattery.

The pictures were ultimately released on May 8 and the director of the White House Military Office, Louis Caldera, resigned over the incident.

The Passing of Dom DeLuise

Amidst the fierce arguments of the week, a number of bloggers took a moment to pay tribute to the passing of Dom DeLuise, the jovial sidekick-style comedian who died last week at the age of 75.

"This is very sad," wrote J.W. Ruch at Hangin’ On a String. "I honestly dreaded this day. My memories of DeLuise performances include his hillarious role in The Twelve Chairs, History of the World Part 1, and an appearance on The Muppet Show. The world has lost a great comedian."*

"He was usually cast as the comic relief in a film or TV show and never disappointed," reflected Vampire Hours. "You get a sense that he really enjoyed his life from the infectious laugh that he had and its effect on those around him…He will be missed."

The PEJ New Media Index also tracks the most popular news videos on YouTube each week. And a disastrous April 30 crash and assassination attempt in the Netherlands during a Queen’s Day parade overwhelmed YouTube last week. Four of the top five videos were of the specific incident. (Video of the same event was also the fifth most watched video during the previous week as well.)

The crash occurred when a man tried to attack the Dutch royal family with his car and struck a crowd watching the parade. Seven people were killed and at least 12 were injured. The dramatic event was caught on video from many angles, and the incident became a tragic YouTube phenomenon as millions of viewers watched it from many different sources.